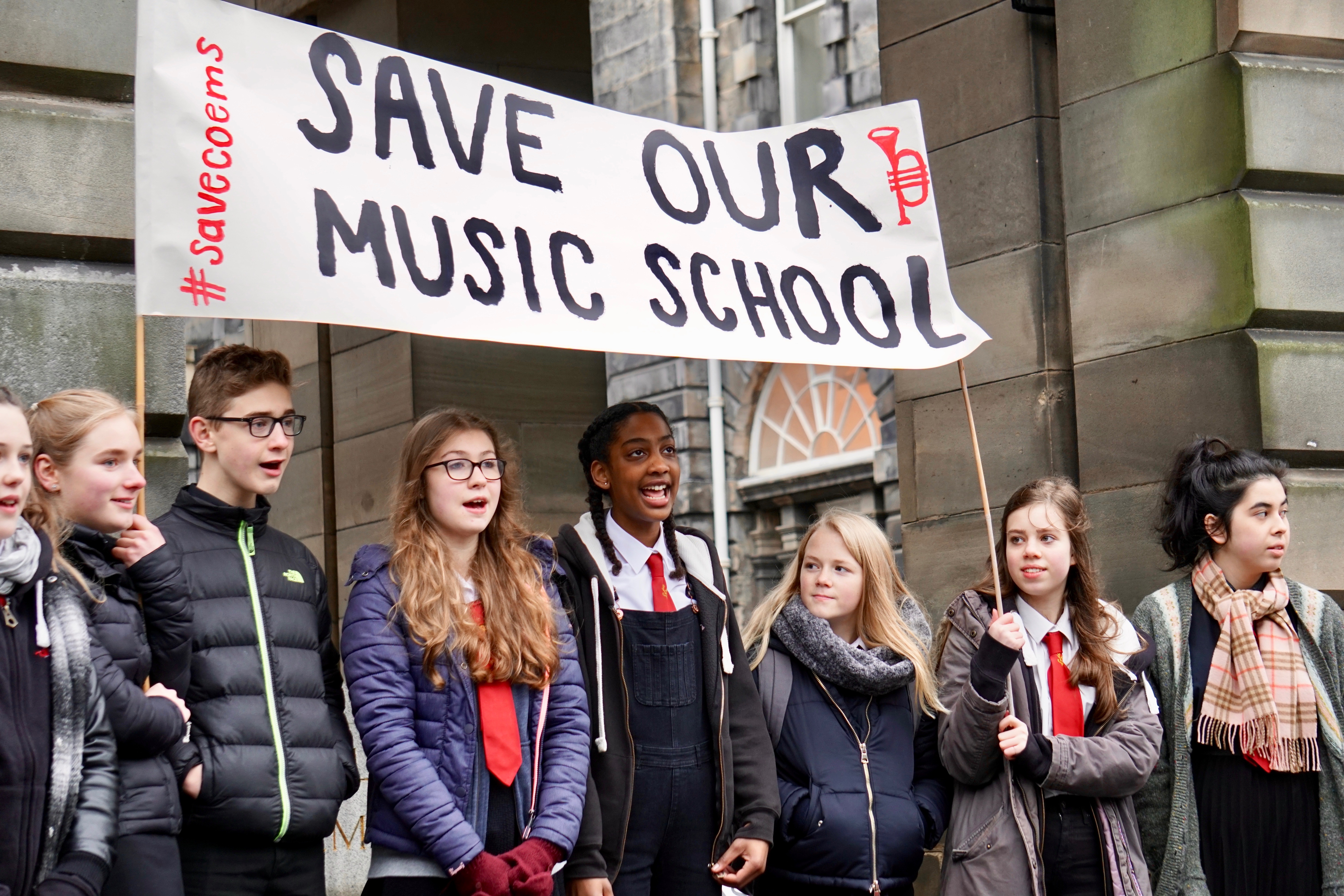 The council decided this morning that the City of Edinburgh Music School, a centre for excellence with its home in two schools in Edinburgh, would be spared from any financial cuts or even closure.

Following a campaign which continued till this morning with pupils from the school playing and singing outside the City Chambers, the council did not have much option perhaps. At the last Finance & Resources Committee meeting on 7 November 2017  the committee agreed to defer putting their draft budget framework out to public consultation to ‘allow for further details to be included’. This was largely caused by a document  about the possible closure of the Music School being leaked.

We don’t really think there was too much in the way of detail added, and when the papers were published online they still included the line about the Music School, but Hugh Dunn, the Head of Finance, confirmed that councillors had seen some of the details between the last meeting and this.

Mr Dunn also pointed out that council officers will continue to look at the six themes in the report from now until the budget is set in February 2018 to make sure the savings (which he said is a target not a definitive amount) are achievable. Until the amounts to be paid to the council by Holyrood are announced in December these figures cannot be finalised.

But when the Finance Convener opened the meeting this morning he did so by putting on the table an administration motion that the Music School would no longer be a target, that the budget engagement process would be reviewed and that there will be a four year examination of savings based on the themes in the report and taking the council’s priorities into account.

Councillor Rankin said : “We do not put forward any of these proposals because we are particularly keen to do that. In fact there has been a great deal of discussion with the administration  about each and every one of these proposals. If you look at the council’s finances in the round you will see that we have to make £21million of savings in the next financial year and all the low hanging fruit went long ago. But we have a statutory obligation to balance the budget. In the next financial year we are looking at double the amount of savings.”

THANK YOU From the Music School

The campaign has been led by a group of parents along with a set of pupils playing music at any opportunity showing off their musical talents. Council Leader Adam McVey said: “Over the past week, we have heard strong views from many parents, former pupils, interest groups and other organisations, who have spoken articulately in support of keeping the City of Edinburgh Music School in its present format.

“With this in mind, we have taken the decision to remove the proposal for a Citywide Excellence and Equity Service out of the suite of proposals going forward for consultation.

“The Music School clearly has a fantastic reputation for musical excellence. We want to be sure that children of all backgrounds are given the opportunity to benefit from this and will look at alternatives proposals for doing so which will retain the current level of financial support and get the support of key stakeholders.

“It is no secret that the financial position for all local authorities, including Edinburgh, is still extremely challenging and we need to find £21m of savings to deliver a balanced budget for the 2018/19 financial year. This does mean the £363,000 of savings identified for this proposal will now have to be found elsewhere and we’re working on these plans now.

“I would encourage residents to have their say on the remaining proposals – which is all they are at this stage – and we will take all feedback into account before agreeing the budget in February.”

“We are very grateful to the Council for listening and understanding. We appreciate that they have a really hard job in trying to budget effectively, but this proposal would have cost them money in lost funding from the Government, so we are glad that this is no longer the case.

“We are grateful to our elected representatives – our Councillors and our MSPs – for their support throughout this process.

“We would also like to thank everyone who has supported the children and young people in the school, from parents, students, musicians, famous actors, alumni of the school – everyone, in fact. Thank you – this was a real community effort.

“The City of Edinburgh Music School at Flora Stevenson Primary School and Broughton High School is a national service and an amazing asset to our capital city. We are so glad that it has been saved. We are very proud of this great school and the role it has to play in the wider community, and we will make sure it continues to thrive.” Proposed savings are based on six themes of Asset Optimisation, Effective and efficient services, Commercial Excellence and Contract Management, Maximising Income, Service Transformation and Workforce Management.  In the table reproduced below some measures are self-explanatory and some will be fleshed out during the public consultation period.

The public consultation will go live here soon. You are encouraged to have your say.