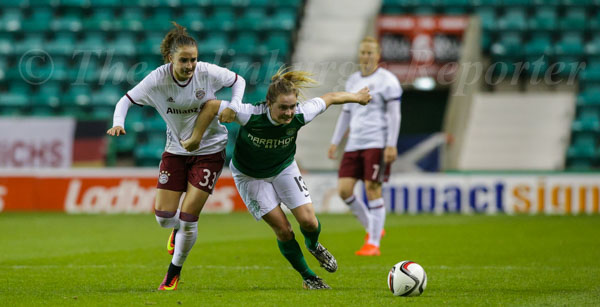 Hibernian Ladies First Team Coach Chris Roberts will leave the club after the SWPL1 game against Aberdeen to join English FAWSL Club Bristol City as Assistant Coach and Technical Director of the Academy.

Roberts has been with Hibernian Ladies since 2010 and took up the mantle of First Team coach from Willie Kirk, now manager at Bristol Academy, in 2014. During his time he brought both the Scottish Cup and Scottish League Cup twice back to Easter Road as well a guiding the ladies through two European campaigns including a high profile tie against German giants Bayern Munich.

Commenting on the departure Hibernian Community Foundation Chief Executive Charlie Bennett said ‘We are sorry to see Chris go but understand this post allows him to coach in a professional environment.

“He is a talented coach and has brought significant success to the Club during his tenure as First Team Coach. He was also very popular in and around the Club and he leaves with everyone’s best wishes. We will now begin our recruitment process to fill this very attractive post.”

Chris said: “I’d like to thank the players and staff for an incredible journey over the last 7 years at the club. I’m extremely sad to be leaving such a talented and driven group of players, all of whom are great people and real ambassadors for the club and the women’s game.

“I am proud of the work that we have done here and confident that the legacy created will be continued.”