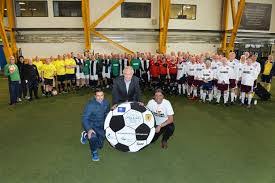 With three games remaining, Hearts 56 have increased their lead at the top of the inaugural Scottish Walking Football league to two points over Gala Fairydean Rovers.

The Edinburgh side beat Stirling 2-0 in the opening game of Wednesday’s session then drew 2-2 with Ayr United before being awarded all three points when Fife Wanderers were unable to field a team.

Hearts 98 won all three games and narrowed the gap at the top.

League games are played at Ravenscraig Sports Centre in Motherwell and ten teams from throughout Scotland take part.

The matches last 18 minutes each and three games are played during each session.

The competition is open to men and women aged over 50 and so far has proved to be a huge success with some fantastic football on display.

The final round of fixtures take place on Wednesday 22nd November.

All three teams face each other on the final day which adds to the excitement.

The full results from Wednesday’s session are as follows.