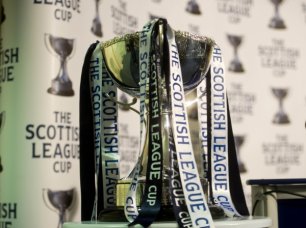 Hibs will face Celtic at Hampden Park in the semi-final of the Betfred League Cup.

The draw was made at Fir Park last night after Motherwell’s victory over Aberdeen.

‘Well’s reward was a tie against Rangers.

The fixtures will be played on the weekend of October 21/22 and ticket details will be announced in due course.

Hibs have mixed fortunes in this tournament. In 1968/69 they reached the final only for the game to be delayed due to a fire at the National Stadium. When the game was eventually played, an under strength side lost 6-2 to Celtic.

In 1972 however, Hibs gained revenge with a 2-1 victory over the Hoops thanks to goals from Pat Stanton and Jimmy O’Rourke.

In 2004, almost 40,000 Hibs fans travelled to Hampden confident of a win against Livingston, but Bobby Williamson’s young side were defeated.

Three years later when the youngsters had gained more experience, John Collins led them to a 5-1 victory over Kilmarnock with goals from skipper Rob Jones, Abdessalam Benjelloun and Steven Fletcher.

In 2015, Alan Stubbs led Hibs back to Hampden but Ross County eventually ran out winners with a last minute goal.