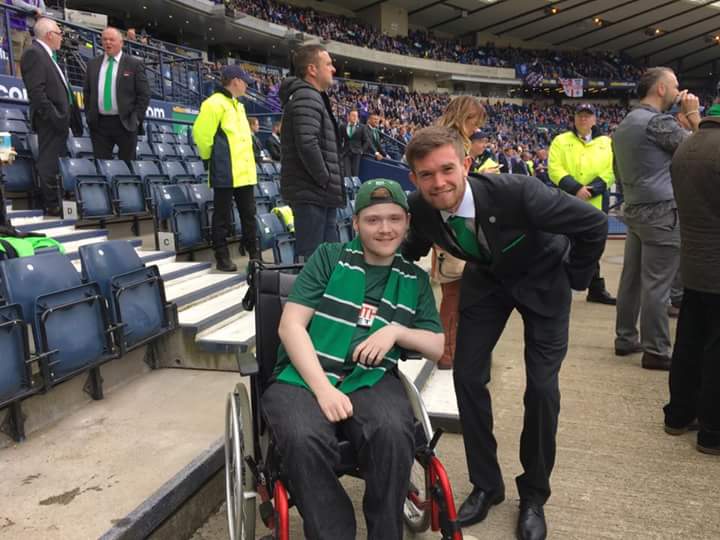 A Just Giving fundraising page established to raise money to buy a custom built sports wheelchair for a young football coach has passed the half way mark.

Mathew Moir has Spina Bifida and Hydrocephalus, both of which have meant that he has endured many major surgeries since birth.

The most recent surgery resulted in a decrease of mobility and balance, leaving Mathew requiring the use of his wheelchair more frequently than ever before.

He has spent many years fighting battles to land himself a position within the football world and recently that has happened.

Following a spell of volunteering at Spartans Connections FC, the disability section of The Spartans Football Club the Hibs’ fan who is pictured above with Sam Stanton at the Scottish Cup Final has now been given the role of Assistant Manager to one of their teams.

This is an enormous achievement which has only been reached following many physical and mental health battles over a number of years.

For those of you who aren’t familiar with wheelchairs, one fit doesn’t suit all. To enable Mathew to continue to build both his independence and self-confidence, as well as to practically work on a 3G surface with his team, he drastically needs to upgrade his current wheelchair.

Having access to a custom-built sports chair will have an enormous impact of Mathews life. This is an upgrade which isn’t available through NHS services.

The preferred option is a chair from RGK the official sponsors of British Wheelchair Basketball who supply equipment to grassroots sports clubs, elite athletes, gold medalists and the most progressive and adventurous wheelchair users.

Half of the companies’ advisors are Ex-Paralympians who have been responsible for 21 podium medals over the years.

Every penny counts and any support is much appreciated by Mathew and his family.

On learning of the appeal, former Hibernian defender Chris Hogg sent his best wishes, tweeting: “All the best to Matthew. Great to see that he is involved in the game. Great guy (and family) and lots of good memories of him from my time up North”