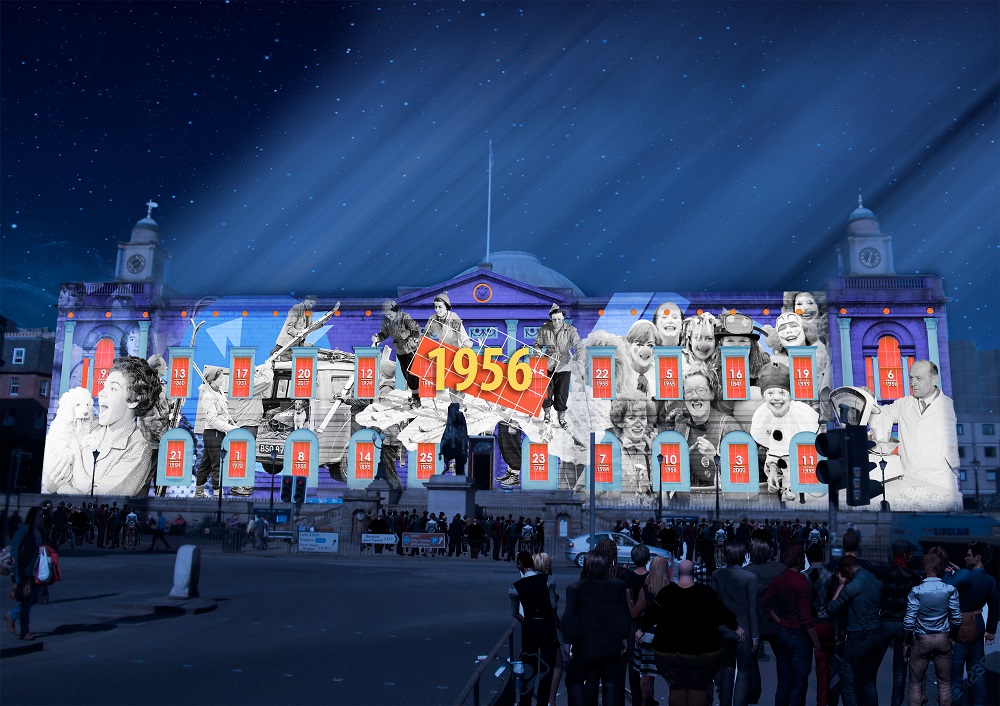 Underbelly who have the contract with The City of Edinburgh Council to provide all the entertainment for Edinburgh’s Christmas 2017 have announced today that the programme is refreshed for this year – and will be very icy!

The Famous Spiegeltent will return to Edinburgh after missing out on her summer visit as St Andrew Square was closed to most of the shows previously put on there. David Bates, owner and producer of The Famous Spiegeltent, said: “We’re coming home for Christmas! We’ve got some spicy seasonal treats in store for Scotland this winter with some new international acts that will bend your minds and bring the fishnets to your Christmas stocking!”

There will be a new feature – The Ice Adventure – which will be staged at the west end of George Street. This will take visitors on a journey through frozen Scotland with the newest attraction made of snow and ice.

The other new feature Edinburgh’s Giant Advent Calendar will be free and will feature nightly projections onto General Register House. One glimpse of Edinburgh in years past will be produced each night until Christmas. Edinburgh Trams will team up with Edinburgh’s Christmas to ask schoolchildren to design a special Christmas and Hogmanay tram which will brighten up the city streets.

Underbelly are now in charge of the programme of events at both Christmas and New Year in the capital and the city’s festive entertainment attracts many visitors to the city. While the events company have been in charge of Christmas over the last five years the number of tickets sold and people who visited increased year on year. Between 2013 and 2016 there was a 46% increase in the number of tickets for Christmas events, and almost a million visitors to the city last year. In addition footfall in the city centre during December has risen by almost a quarter since 2012.

As usual those living in an EH postcode will enjoy a 20% discount on tickets bought, which applied to 130,680 tickets purchased last year. CLICK HERE

Everything Christmassy will begin on 17 November 2017 and will go on until 6 January 2018.

Charlie Wood and Ed Bartlam, Edinburgh’s Christmas, said: “This is the fifth year Underbelly has produced Edinburgh’s Christmas on behalf of the City of Edinburgh Council and we are extremely excited to be presenting such an ambitious and refreshed programme spreading farther and wider across the city, reaching more communities than ever before.

“There is the free to access giant Advent Calendar on General Register House to the brand new icy Scottish journey of The Ice Adventure on George Street, to the breath-taking La Clique Noel taking residence in our Festival Square Spiegeltent on Lothian Road and Winter Windows on display in Craigmillar and Wester Hailes.

“The economic impact of Edinburgh’s Christmas on the city is growing every year and with the positive effect it has socially on the residents of Edinburgh, we are proud to be able to bring world class winter entertainment to the Scottish capital yet again.”

Edinburgh’s Lord Provost, Frank Ross, said: “Produced on behalf of the Council for the enjoyment of everyone, Edinburgh’s Christmas has become one of the top winter festivals in the UK.

“This year’s programme celebrates the past, present and future of our city, with a combination of new attractions, popular events and old favourites.

“I’m looking forward to seeing the festive cheer spread beyond the city centre this winter with decorative displays in many of our local communities. From Westerhailes to Leith, 50 artworks by local schoolchildren will provide a window into the Edinburgh of the future. It will spread awareness of the 2050 City Vision initiative and brighten all corners of Edinburgh.”

Jamie Hamilton, of Hamilton Ice said: “We couldn’t be happier to be part of Edinburgh’s Christmas for the first time. We’re having great fun imagining and creating in snow and ice many aspects of Scotland from Robert the Bruce to Dolly the Sheep for The Ice Adventure, which we hope visitors will enjoy exploring and discovering.”

Steven McConnachie, Director of Double Take Projections, said: “We’re delighted to be working with Underbelly on both Edinburgh’s Christmas and Edinburgh’s Hogmanay. Edinburgh’s Giant Advent Calendar will be a stunning new feature for this year and we are enjoying working with partners to uncover some old Edinburgh gems which will be revealed in December.”

Roddy Smith, Chief Executive of Essential Edinburgh, said: “Christmas is a vital time of year for our retailers and our hospitality businesses, as well as a time of year that everyone who enjoys our city centre – residents and visitors alike – looks forward to. Edinburgh’s Christmas is now a big part of that, and we are looking forward to another fantastic Christmas.

“Essential Edinburgh is delighted to be partnering with Underbelly to animate the west end of George Street, to create a brilliant Light Night, and to create the famous and hugely popular ice rink in St Andrew Square. “

John Donnelly, Chief Executive of Marketing Edinburgh said: “The new attractions and planned expansion of Edinburgh’s Christmas offering this year is terrific news for the city.  By enlarging the geographical footprint of the festive celebrations across the city centre, we are creating a refreshed destination experience that will crucially encourage residents and visitors to explore further afield, helping them to discover new shops, restaurants and bars.”

Neil Gregory, Deputy Head of Engagement at Historic Environment Scotland said: “We’re delighted to be a lead partner working with Underbelly on this year’s festive celebrations in the capital.  We’ve been working with them and Double Take Projections to provide a huge gift box of images from our holdings in the National Record for the Historic Environment and Scran.  Using our archives to create a digital advent calendar to showcase the winters of years gone by is a perfect finale to a fantastic Year of History, Heritage and Archaeology and a great way for us to wish visitors to Edinburgh city centre a very happy Christmas”. In Edinburgh’s Giant Advent Calendar archive of the city dating back to the 1700s supplied by partners including Historic Environment Scotland, National Library of Scotland, and National Records of Scotland will be animated and set to a soundscape reflective of that year, supporting the end of 2017 as the Year of History, Heritage and Archaeology. Edinburgh’s Giant Advent Calendar will be visible on General Register House at varying times from 5pm to 10pm every day.

This year up to 50 windows will be displayed across the city. In West Parliament Square the Winter Windows designs from each school will be displayed outside St Giles just off the Royal Mile to be seen by the thousands of visitors to Edinburgh’s Christmas, giving local schoolchildren a great way to get involved in the festivities and show off their artistic talents.

In 2017, this will expand into communities outside the city centre with windows popping up in Leith’s Kirkgate Plaza, Craigmillar Library Plaza, Drumbrae Plaza and Westerhailes Plaza.

Brand new for 2017, this arctic installation at the west end of George Street is an immersive walk-through experience filled with spectacular ice and snow sculptures to take your breath away. The event is produced by Underbelly and Hamilton Ice, producers of the Ice Kingdom at London’s Winter Wonderland – that event’s most popular and pre-booked attraction. Supported by Shackleton Whisky, this attraction will also feature an ice bar.

Take a tour of Scotland with life-like ice sculptures of Vikings, fairies and Kelpies, Highland cows, eagles and Dolly the Sheep, Robert the Bruce, Mary Queen of Scots and Greyfriars Bobby, and of course the Loch Ness Monster!

Christmas just wouldn’t be Christmas without a visit to Santa… A chance for children to meet Father Christmas, hear a festive fairy-tale, and receive a wee gift.

SHARK IN THE PARK

Based on the books by Nick Sharratt

1 December to 6 January 2018. Tickets are available to book at edinburghschristmas.com

The elliptical ice rink in St Andrew Square is always a popular draw and a much loved part of Edinburgh’s Christmas, set next to the Christmas Nativity scene in the gardens.

In conjunction with St Andrews and St Georges West and Edinburgh Churches Together, at the start of Advent, a carol concert will take place around the Nativity Scene in St Andrew Square, generously donated to Edinburgh by Sir Tom Farmer. Light Night is an event free for all to enjoy, which encapsulates the true spirit of the festive season: family and the community.

Choirs and dance groups from across Edinburgh including Little Voices Big Stars, Edinburgh Ballet and Edinburgh Rock Choir will perform across two stages on George Street in front of an expected audience of around 20,000 people. The event will be once again hosted by the formidable Forth One DJ Arlene Stuart.

The Christmas Tree on the Mound, a gift to the City of Edinburgh Council from Hordaland County Council in Norway, will be lit as part of the Light Night switch-on.

The Star Flyer: See Edinburgh as you have never seen it before, and this year you might just open your eyes! Located next to the Scott Monument in East Princes Street Gardens.

The Forth One Big Wheel: The arrival of the Big Wheel in East Princes Street Gardens signals the festive season has arrived! Take a ride in this Dutch made Ferris wheel’s cosy, covered pods to enjoy spectacular views across the city. Bejewelled with 20,000 lights it makes a joyful addition to Edinburgh’s famous festive skyline. A new partnership with Forth One brings a special soundtrack to this festive experience.

Santa Land: In the heart of East Princes Street Gardens Santa Land is a place of Christmas sparkle and magic with the Elves workshop hidden inside the Christmas Tree Maze, the Santa Train and other affordable kids rides. Note that Santa’s Grotto can be found on George Street this year.

The European Christmas Market: Over 100 stalls return to East Princes Street Gardens and the Mound Precinct from across northern Europe with a selection of tasty food, warming drinks and beautiful handmade gifts for sale.