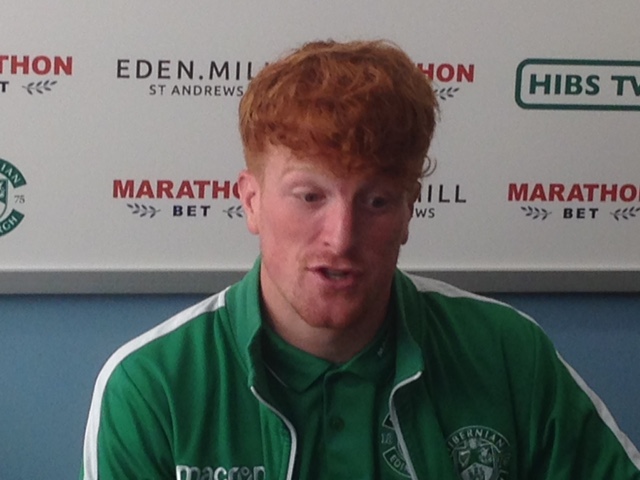 Simon Murray is loving life at Hibs and the feeling is mutual amongst the fans, many of whom admit to being sceptical following the signing of the former Tayport, Dundee Violet, Arbroath striker from Dundee United.

However the strike, r whose father Gary played for Hibs 35 years ago, has won the affections of the supporters and was rightly named man of the match after Saturday’s 3-1 win over Partick Thistle.

He even has his own song, a version of the Good Charlotte hit, ‘Girls and Boys’ with the line ‘Girls don’t like boys, girls like Simon Murray’ which was regularly belted out from the new singing section of Saturday.

Incredibly he has already surpassed his dad’s scoring record for his first season and has hit the net an incredible eight times already and almost made history by becoming the first Hibs’ player to score successive hat-tricks since Joe McBride almost 50 years ago.

Despite the scoring record however Neil Lennon finally signed Anthony Stokes and revealed that the former Celtic striker will play when fit, but Murray is looking forward to the challenge.

After receiving his award form the sponsors, he told a packed press room: ““I don’t really see it as being a case of me being the man in possession. I like to score goals and I like to work hard for the team.

“I feel as though I add other things to the team. If I keep playing well, hopefully I’ll keep playing.

“The signing of Anthony  will make me a better player and I’m looking forward to working with my fellow strikers as well. I definitely see it a positive rather than a threat because when you have quality around you then the pressure’s maybe not solely on you to score. We’ve got firepower through the team. The better the team is, the more chance I’ve got of scoring goals.

“We’ve got a strong squad. It makes you perform better because you know there’s someone there waiting to come and take your place and we had someone like Anthony Stokes to bring on in the second-half.”

Hibs travel to Ibrox on Saturday to play Rangers for the first time since the epic Scottish Cup victory and there is sure to be a hostile environment.

He continued: “I am buzzing to go and play Rangers. I’ve never played at Ibrox before. I don’t think we’ve got anything to fear and we can afford to give it a go. I’m looking forward to it.”

“That’s what you dream of when you’re playing as a kid. You want to play in front of a crowd like that.