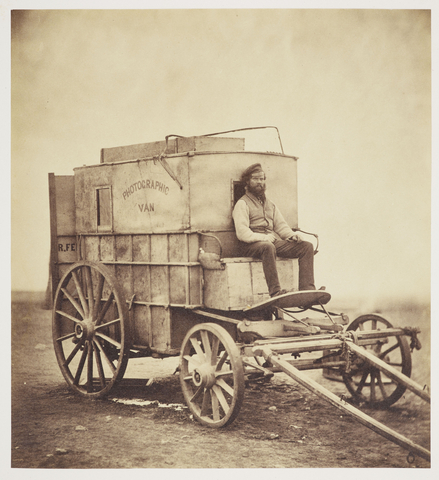 ‘It’s a 1,000 yard stare; his mental capacity has no chance of focusing on anything.’

War photographer Don McCullin is talking about Lord Alexander Balgonie (1855) (Royal Collection Trust/© Her Majesty Queen Elizabeth II 2017), a photograph taken in a London studio; this haunting portrait shows the peer on his return from the Crimean War, looking much older than his 24 years, dishevelled, distant, lost. It is thought to be the first ever visual record of a victim of shell shock. Two years later Balgonie was dead. In Shadows of War, an absorbing new exhibition at The Queen’s Gallery, pictures of the Crimea taken by pioneering photographer Roger Fenton can be seen for the first time since 1856. Although Victorian sensibilities did not allow Fenton to record explicit scenes of war and injuries, his work showed the British public the realities of war and its aftermath for the first time, and – in an age when neither television nor social media existed – paved the way for a new genre of war reporting.

Roger Fenton was born into an affluent Lancashire family in 1819. After Oxford he qualified as a lawyer, but became increasingly interested in art and eventually enrolled as a pupil of Charles Lucy. In 1851 he saw photographs at the Great Exhibition in Hyde Park; within a year he had travelled to Paris to study the process, returned to the UK and exhibited his own images. A year later he established the Photographic Society, and it was at one of the society’s exhibitions that he first came to the attention of Queen Victoria and Prince Albert. The Queen commissioned Fenton to take photos of her family. Shadows of War includes a charming print of the royal couple, Queen Victoria and Albert, Prince Consort (Royal Collection Trust/© Her Majesty Queen Elizabeth II 2017), the Queen’s hair ribbons painted over in pale blue, the flowers on her dress picked out in pink. Also displayed is an evocative image taken just before the official declaration of war, Royal Yacht Fairy steaming through the fleet, in which the royal party is seen in silhouette, watching the departing ships as dusk falls over the water.

In 1853 Britain, France, Sardinia and the Ottoman Empire declared war on Russia. They wanted to stop what they saw as Russia’s attempt to expand its reach westwards. In 1855 Fenton was dispatched to the Crimea, not as an official war photographer but on a commission from the publishers Thomas Agnew & Son, who wanted him to take photos as source material for a large scale oil painting to be executed by Thomas J Barker. Fenton sailed on HMS Hecla, taking his extensive equipment (36 chests of it) and his two assistants with him in a converted wine merchant’s van (Photographic Van  1855 (Royal Collection Trust/© Her Majesty Queen Elizabeth II 2017). The nature of his mission may have been commercial, but Fenton still allowed himself to respond emotionally to the chaos and disorder of the warzone.

Fenton was of course obliged to photograph many of the Allied leaders and officers; his portraits of Lord Raglan, the Earl of Cardigan and the Earl of Lucan – whose combined lack of relevant command experience soon became painfully obvious – are all here, together with Scottish Field Marshall Colin Campbell (instigator of the 93rd Regiment’s famous ‘thin red line’ that repulsed the Russian army at the Battle of Balaclava), French General Pierre Bosquet, and Ottoman top brass Ismail Pacha and Omar Pasha.

In The Council of War on the Morning of the Taking of the Mamelon. Lord Raglan, Omar Pasha, Maréchal Pélissier (Royal Collection Trust/© Her Majesty Queen Elizabeth II 2017) we see the leaders sitting at a round table at Raglan’s HQ, presumably discussing their pre-battle tactics. It is said that although Pélissier had the utmost respect for Raglan, he treated Omar Pasha so contemptuously that Pasha became increasingly eager to remove his army from the Crimea to the ongoing war in the Caucasus. Raglan, who was strongly criticised for his mismanagement – and on whom the government was keen to lay the blame for its own ineptitude – died (of illness) before the war ended. In her journal Queen Victoria wrote about ‘poor Lord Raglan’, saying that she and Prince Albert were ‘dreadfully shocked and startled by the news.’ But Fenton also wanted to tell people about the ordinary soldiers, the men, who – unlike their officers – had no money to buy extra food and clothes, and who spent the freezing winter nights in tents, while their ‘betters’ (who were indeed both better fed and better clothed) bedded down in wooden sheds built for them by their servants. Captain Brown and Servant  (Royal Collection Trust/© Her Majesty Queen Elizabeth II 2017) shows men wearing white overcoats, standing in front of flimsy tents. Was Fenton’s intention to show the variety of uniforms around him – or was it to tell the British public how ill-equipped the army was for the Russian climate? There was no censorship at this time, so it was not only Fenton’s work that opened people’s eyes; war correspondents such as The Times’ William Howard Russell (whom Fenton photographed in 1855) were now able to send their reports home much more quickly, and soldiers’ letters could be as graphic as the writers wished. Fenton was the master of the evocative image; the desolate landscape of the acclaimed Valley of the Shadow of Death  (Royal Collection Trust/© Her Majesty Queen Elizabeth II 2017) shows neither combat nor injury; the barren landscape littered with cannonballs tells us so much more. With the news that the supply ship Prince had sunk with the loss of all winter supplies (even hay for the horses) public opinion began to turn against the war.

Fenton documented camp life in all its guises. In photographs such as 8th Hussars, Cooking Hut – a study that appears almost in its entirety in Barker’s later painting – men are seen sitting in groups having cups of tea, or lounging on the ground outside their tents. Surprisingly, perhaps, women appear in many photographs. Non-commissioned officers’ wives sometimes accompanied them on their travels (‘following the drum’); in Mrs Duberly with Captain Duberly of the 8th Hussars (Royal Collection Trust/© Her Majesty Queen Elizabeth II 2017), the indomitable Frances Duberly is shown sitting side-saddle on her horse. Mrs Duberly, whose husband was paymaster to the 8th, was at that time the only officer’s wife at the front, and quite a woman. Frances witnessed the Battle of Balaklava and was one of the first civilians to enter Sevastopol after it fell to the Allies. She wrote a journal of her experiences in the Crimea, which was afterwards published as a Journal Kept During the Russian War. As well as eye-witness accounts, the journal includes gossip and rumours circulating in the British Army; its contents led to her being snubbed at the royal review of her husband’s regiment after the war, and she was not allowed to dedicate the journal to the Queen as she had intended. Women called sutlers helped with cleaning and cooking in the British camp; the French had their own vivandières who also provided cooking, cleaning and nursing services. Scots Jamaican businesswoman Mary Seacole travelled independently to the Crimea to set up her own ‘British Hotel’, which she described as ‘a mess-table and comfortable quarters for sick and convalescent officers’, where they would always find ‘a good joint of mutton.’ Like Mrs Duberly, Mary Seacole wrote a book about her time in the Crimea: Wonderful Adventures of Mrs Seacole in Many Lands (1857).

For most of us, the most famous name associated with the Crimean War is not one of the military leaders but Florence Nightingale, the ‘lady with the lamp’ who is said to have founded modern nursing. Nightingale hated having her photograph taken. Shadows of War includes an image taken by another photographer, William Edward Kilburn, but it is thought that Fenton’s portrait of Mrs Dunkerly was the one Barker used for his painting. Barker’s The Grand Picture of the Allied Generals with the officers of their respective staffs before Sebastapol is shown here as an engraving (the painting itself being in a private collection), together with a copy of the original key identifying the various figures it depicts. From generals to foot soldiers, wounded men, nurses, horses and dogs, all battlefield life is here. The painting incorporates over 50 of Fenton’s photographs, and he is fully credited.

Fenton returned to Britain, ill and depressed, in July 1885. He had spent just a few months in the Crimea, but in that time he had created a unique record of military life. Hundreds of prints of his images were shown in venues across the country, with copies often being available for less than a pound. By the end of March 1856 over two million people had seen Fenton’s photographs, but sadly he himself made little money from his work. He did, however, continue his association with the royal family, taking pictures of the Queen’s children at Balmoral. Queen Victoria, who had already sent supplies and books to the Crimea, was the first monarch to meet and engage with returning veterans. She took a great interest in their welfare, inviting wounded men to Buckingham Palace (one such event being recorded in a painting by John Gilbert, also shown in the exhibition), visiting the wounded in hospitals at Chatham and elsewhere, and commissioning many photographs of them. In June 1857 the first Victoria Crosses were awarded by the Queen to honour acts of bravery in the Crimea.

The war also had a great impact on HRH’s son the Prince of Wales, even though he was only 12 years old at the time. He recorded every meeting he had with a war veteran in his journal, and later, in 1869,  visited Sevastapol, writing to the Queen about his experiences;

In the excellent multimedia guide accompanying this exhibition, HRH Prince Harry speaks about the public’s fascination with people returning from war, and the psychological impact that being on the battlefield has on servicemen and women;

‘As a result of photographers like Roger Fenton and those that have followed him, the public has gained a better appreciation of these experiences and consequently, over the years this fascination has turned to appreciation and respect. Today, soldiers are encouraged to talk about what they have experienced and if necessary get the help that they need.’ A particularly moving final image is that of Sergeant Thomas with his Daughter (Royal Collection Trust/© Her Majesty Queen Elizabeth II 2017), a photograph taken by John Jabez Edwin Mayall. Sergeant Thomas cradles his young child with his one remaining arm. Prince Harry again;

‘..he will never be able to explain to her the experiences of the battlefield and what he’s seen, and he may be thinking to himself I hope my daughter will never have to go through what I’ve had to go through.’

‘Roger Fenton was ahead of the game really..’ (Don McCullin)

Shadows of War: Roger Fenton’s Photographs of the Crimea, 1855 is at The Queen’s Gallery, Palace of Holyroodhouse, until 26 November 2017. Admission charges apply.

All photos taken in the gallery by John Preece.