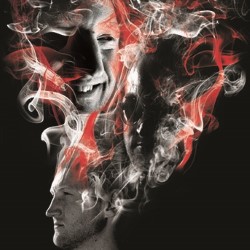 This groover from Vancouver with his muse manoeuvres returns to Edinburgh Fringe 2017 with a neuron-zapping sequel to his previous brain-straining Rap monologues that evolved from his Fringe smacking, 2004 debut, The Rap Canterbury Tales.

The Rap Guide to Evolution, The Rap Guide to Religion and other divers hip-hop orthodoxy bothering free-style/free-thinking apostasies were but sacrificial pawns. This show needs some serious thinking about. Not about why you should – but more perilously – why you did not attend. It is all about free will. You were told that. Remember? Confused? Get in and get even more so.

A synaptic synopsis will needs suffice for this evening’s so shareable delightness of being human beings being busy in thought and deed where Evolution`s necessity ignited the spark in the dark. Maybe a nuanced homage to Carl Sagan`s Demon-Haunted World: Science as a Candle in the Dark, it ripples with razor raptor-toothed bite-sized bile against the champions of ignorance. This is definitively cognitive diss-your-ass.

Bayesian inference relating to `prior probability` and `likelihood function` also crop up, as you are no doubt going to share with your mates over a dram or two after the show. Pithy, wittty, seemingly elementary school video projections elucidate, imitate and naughtily subvert the scholastic norm.

He takes a virtual acid trip with an octopus. (Bill Hicks had that sort of sorted way long time ago, Baba). But see what happens when` Deep Dreams` are thrown in to the cortex blender of potential cognitive implants and injections of digital Botox.

Beware the Zombiness of no-consciousness. Nevertheless, putting all of this to one side, and whatever part of your brain decides to let Salvador Dali`s freakish swans tie your shoe-laces – this show is Forbidden Planet, mind-magnetic metamorphic magic.

The Rap Guide To Consciouness is incandescently, intensely odd, compulsively quirkily brilliant and profoundly intimate in that way geeky scientist have been on special courses for. The background research is hippocampus jaw-dropping. This is what happens when you marry a neuroscientist.

Do not expect to understand at least half as much as you did before realising you will know infinitely more than you ever did before. Confused? Evolution did you a favour being able to be so. If you are in two minds about seeing this show then do both your selves a favour and check it out. Only afterwards will you truly understand what having second thoughts are really all about. Shame on you shamen – Out Demons, Out!