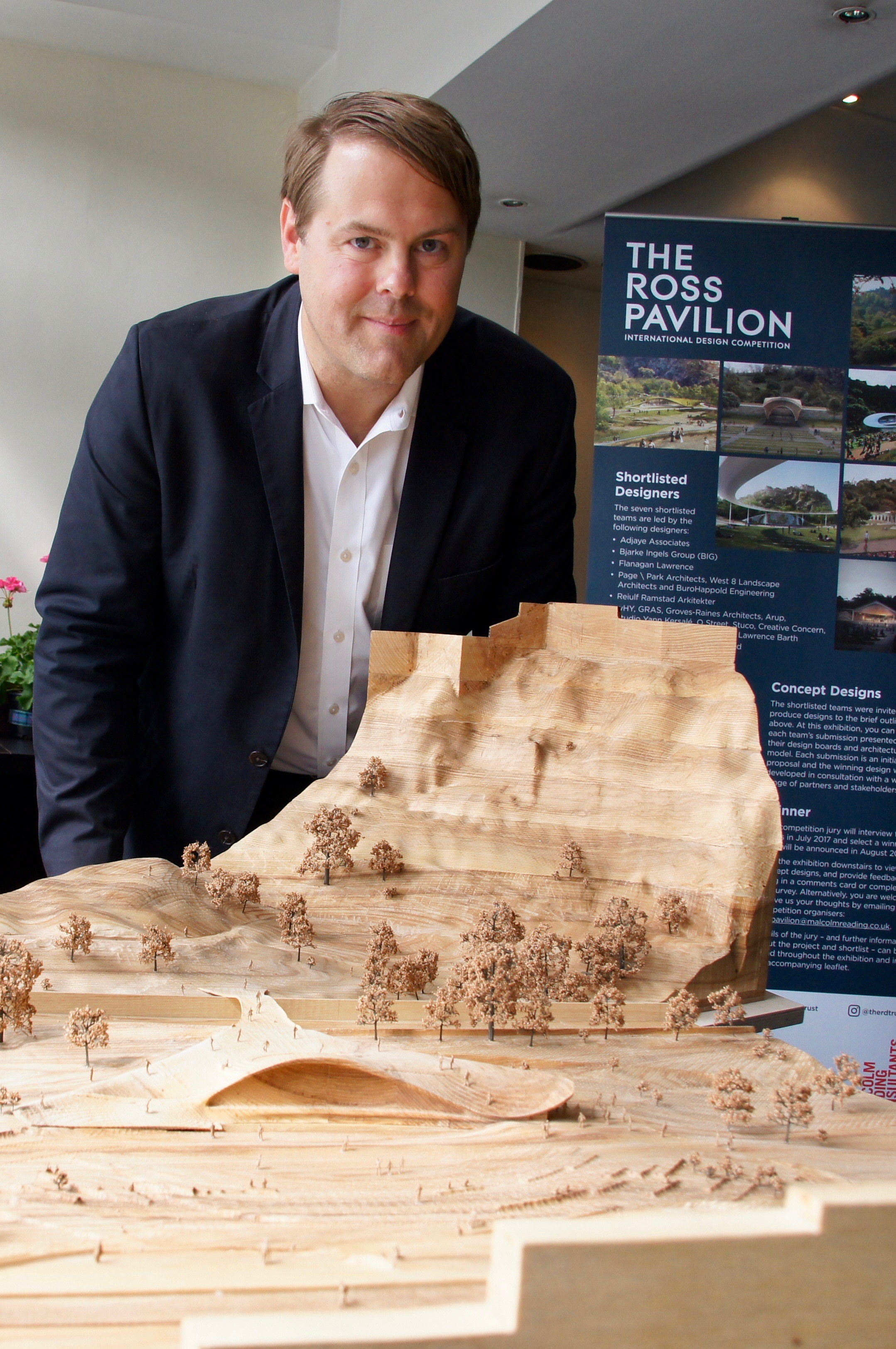 The winner of the design process to replace the Ross Bandstand was announced this morning in the Royal Overseas League, overlooking Princes Street Gardens.

And the winner is…. an international consortium of companies headed up by US design practice wHY,  with local input from GRAS, Groves-Raines Architects and others.

Mark Thomann is landscape design director with GRAS which is a part of the consortium to redevelop one of the most iconic sights in Edinburgh. We asked how that felt and he replied : “It’s exciting, It’s an exciting challenge. I visited Edinburgh many years ago and I was completely captivated by the rock and the castle, in the way that I think many people are. Since that time I have seen many other world wonders. You always dream as a landscape architect of working on a project of that quality and character.

The pavilion designed by wHY is called The Butterfly Pavilion and Mark explained to us where the name and the concept came from : “As we were looking at the connections and how the connections and the transformations could happen in this project, biodiversity was something that was really important in working with Noel Kingsbury our horticulture consultant.

“We asked how we could bring a new image of horticulture and biodiversity to the project. The idea of butterfly and the papillon meaning pavilion and the etymology of the words started to come together. We realised even some of the forms were… It was almost like it was starting to transform and starting to emerge for us so it became this nice tidy concept.”

Mark confirmed that not only have they taken account of the public’s views throughout the design process, and they have members of their team including writers and actors as well as architects who are all based in Edinburgh.

“We have a blueprint and we can talk about that,  and if certain things need to change that’s okay. That is what the design process is. What we have now is a good base and it will emerge into something really special and fitting.”

The Ross Development Trust have picked a design winner from Phyllis Stephen on Vimeo.

Councillor Donald Wilson the Culture and Communities Convener explained there were 160 notes of interest in the design competition and he thought they were all good. As part of the judging panel  he recognised that the seven shortlisted entries were very fully developed concepts. But this design stood out for him and he told us why : “This design shows a very real and knowledgable approach to the culture and history of the site and how it could be developed. But it makes the most of the assets that are already there. You have the New Town on the one side and the Old Town on the other and of course the iconic backdrop of the castle. You have make the most of these things but at the same time these are pleasure gardens. They were originally set up as that so they have to be there for people to enjoy as gardens.

Local businessman and entrepreneur Norman Springford has invested £5 million in the project and the council signed a development brief just over a year ago. The Convener confirmed that the council is ‘fully committed’ to the development of the site. Councillor Wilson continued : “It is something that the council has wanted to do for a long time, but if it was not for Norman Springford then this would not be happening. The council’s support is non-financial and so that is why it would not otherwise be happening. There is also a requirement to raise some private funding as well.”

CHAIR OF THE ROSS DEVELOPMENT TRUST

Norman Springford said it was a privilege to be part of the whole process and as chair of the jury panel it was a fascinating day to look at all the finalists’ submissions and  we had several days of debate.

We reminded him that he started all of this and made it possible, and asked why he did that. He explained that as somebody who has been here all his life he considered the gardens were looking just a little bit tired. “Was it due for a refurb? I think the answer is it probably was.”

And why did he like this design? “I think the reason why we all selected this design unanimously was that not only had they come up with a great design for the Butterfly Pavilion but they respected the setting, the castle the link between the Old and the New Towns and the landscaped areas which they are introducing back into the gardens.”

There is now a funding requirement and this is the start of the process. There will be ongoing consultation with heritage bodies, the council and members of the public.

Mr Springford concluded : “Everyone is vital to this project from funding from high net worth individuals and corporate funders and we also expect and hope to get the city behind the whole thing.”

Edinburgh-based architect Gunnar Groves-Raines is also involved in the project and we found out what his involvement had been : “We have had the privilege of being at the centre of this collaborative design team led by wHY in America. We’ve been providing a lot of local context and understanding of the place and the people. We have been very involved in the design development, but also critically in the heritage aspects and really understanding the significance of Edinburgh’s built and natural heritage.”

ABOUT THE WINNERS
wHY is an interdisciplinary design practice dedicated to serving the arts, communities, culture and the environment since 2004. Led by founder and creative director Kulapat Yantrasast and landscape design director Mark Thomann, wHY is a collective of architects, landscape designers, makers and strategic thinkers, who work as four independent yet interconnected workshops; ideas, buildings, grounds and objects. With offices in Los Angeles and New York, wHY’s 30 team members and network of experts share a commitment to collaboration.   wHY has assembled a team of thought leaders and creative influencers, including engineers, designers, plant-lovers, graphic designers, writers, journalists, actors, artists, and activists who are passionate about Scotland and participating in the conversation for the future of the Ross Pavilion. Recent projects include the widely published Speed Art Museum in Louisville, KY and Skylanding with Yoko Ono, in the historic Olmsted designed Jackson Park in Chicago, IL.

Seven architects were shortlisted to lead the major redevelopment of the Ross Bandstand in Edinburgh.  All submitted comprehensive designs in line with the brief prepared by The Ross Development Trust. Each was invited to create concept designs for the £25m project brief, which includes a new landmark venue to replace the bandstand, a visitor centre and subtle updates to West Princes Street Gardens.

The seven teams of architects and designers were selected earlier this year from a  pool of 125 entries.   Entries from the shortlisted teams have been on display at the City Art Centre, Edinburgh since 21st June and today the winner was chosen. This is only an outline concept and the public can still influence the final design.