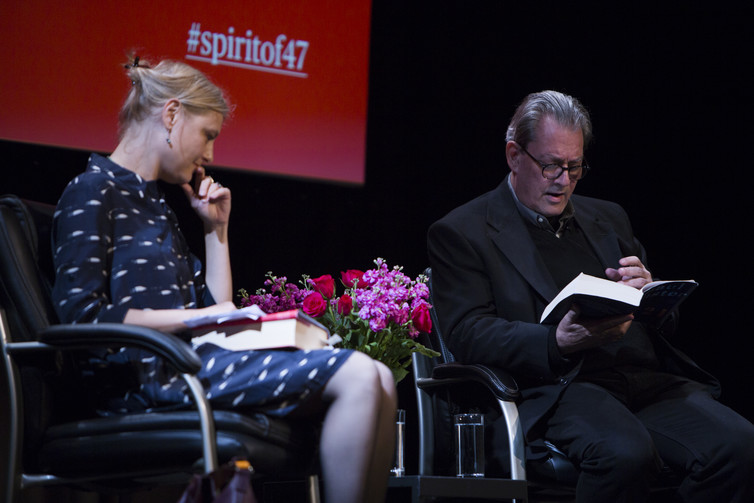 Paul Auster takes the stage at the King’s Theatre in Edinburgh to a great reception. He reads the opening pages of his latest work, the Man Booker-longlisted 4 3 2 1. It is a rare chance for his UK fans to see and hear the man up close and personal.

The 70-year-old graciously relates stories from his life as a writer in discussion with fellow American writer Nora Chassler. Early on, he talks about growing up in a bookless household. The nine-year-old Auster got round this by visiting the public library, coming home with works by Robert Louis Stevenson and Edgar Allan Poe.

By his teens, he explains, he knew the writer’s life would be a struggle. His concerned father suggested he become a professor and write poetry as a hobby. Auster even attended a PhD interview, but fortunately a perceptive professor told him not to do it as he had talent as a writer.

You sense being a professor of literature would have been a terrible failure for Auster. He seems to associate such jobs with middle-class careerists and compromisers, prioritising comfort and respectability over the risks of genuine art. There is slight disdain as he (warmly) remembers a brilliant school friend who was expected to achieve wonderful things but merely ended up a Harvard professor – and the prototype for one of Auster’s literary characters.

Auster talks about how books touch people, creating empathy by asking us to inhabit others. Novels used to ask us to sympathise with gods and kings, he says, but are now mainly about ordinary people. It’s democracy in action, an egalitarianism that Auster seems to embody both on stage and in his writing. His novels are all about the complexity of human existence and the struggle to understand, to survive, to feel meaning in life.

One of the most important aspects of great fiction is often referred to as voice. This is about speaking directly to the reader in a particular consistent style. The pleasure readers receive from “hearing” this voice is what makes them return to an author again and again.

Paul Auster’s mastery of voice is the main thing that makes his prose so captivating. He does it in a conversational American-English, much like his spoken voice, and from this musical prose his characters evolve. It feels so effortless – so spoken – but involves the sophisticated use of a number of literary techniques.

The clarity of his prose is striking, for instance. He recalls an influential conversation with the poet Edmond Jabѐs, in which Jabѐs insisted that syntactical innovations were not as subversive as clarity. Auster goes on to cite Kafka, another writer known for his clarity, as being “always with us”. In future, readers will probably say the same about Auster.

Another element often considered central to Auster’s work is chance. To give one of many examples, in City of Glass the main character Daniel Quinn is mistaken for Paul Auster, an event that propels Quinn into a world of uncertainty. During the Edinburgh discussion Chassler refers to coincidence instead of chance, but Auster rejects both labels. He is simply describing the unexpected, he says, something that happens to everyone. He suggests that those who don’t get this point don’t understand the “mechanics of reality”.

He wonders if people who read too many novels – presumably including many in the audience – end up imposing their own limited ideas of narrative onto what they read. They have a sense from fiction that chance occurrences are something remarkable, for example, so they misunderstand Auster’s approach to them.

Auster’s latest novel has clear resonances with his own life. The main character, Archie Ferguson, shares the author’s own chronology (born 1947) and his geography (New Jersey, New York, Paris and so on). Like the young Auster, Archie is struck by the power of Dostoevsky’s Crime and Punishment as a teenager.

Yet Auster stresses that this character does things he himself never did – and indeed, the novel narrates Archie’s four alternate lives. It is a case of using one’s own life as a starting point, something we see repeatedly in Auster novels.

He began writing 4 3 2 1 at 66 years old, he explains, the age at which his father suddenly died. The thought that he too could drop dead made him work fast, finishing the 866-page novel in three and a half years rather than the expected five. This sense of self-reflection and being aware and anxious about artistic creation is another central theme in his work. Hence many of his characters are writers, living in their own bubbles, obsessed by their literary projects.

You certainly can’t deny Auster’s dedication to his art, both in the craftsmanship and the sheer volume: 18 novels plus numerous books of poetry, non-fiction and screenplays. He explains he pushed everything aside to commit to 4 3 2 1, reinforcing the sense of him as a serious working writer rather than a literary star.

At the end of the event, a long, long line of fans queue to get books signed. Auster is particularly warm and courteous to them, but those with their own literary ambitions will be leaving with some new thoughts from the evening as a whole.

In short, commitment is everything; middle-class trappings must be put aside; true art is about vocation, isolation and obsession. Expect lots of reading and thinking; and relentless work of the kind that most people would find absurd because it involves, as Auster puts it, sitting in a room putting words on a piece of paper.

Yet it’s a worthwhile struggle, which for Auster has produced writing of the highest quality and beauty. Books like The New York Trilogy, Mr Vertigo, Timbuktu and 4 3 2 1 have touched people’s imaginations in the way Dostoevsky and Kafka touched the young Auster.

Finally, never rule out the unexpected. We ourselves queue and get to ask Auster a question after climbing the stage: “Since you’re in Scotland, are there any Scottish contemporary writers you enjoy?”

He seems startled. “What,” he says, so we ask again.

“Ah,” he says, putting his hands to his head. “I’m sure there are some great ones, but I can’t think of any”. He smiles. “I’m sorry. I live in my own little world, in my own little bubble.”