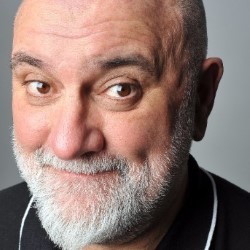 Home Culture Edinburgh Festival Fringe REVIEW Alexei Sayle****
Share
Facebook
Twitter
Pinterest
WhatsApp
Print
And so on to the Underbelly’s Cow Barn where “the godfather of alternative comedy”, as the impish London-based Scouser is billed, vented his pot-bellied spleen at an indeterminate number of targets in front of a 250-strong crowd. As angry as ever at 65, Sayle jogged self-mockingly onto the stage and began, ever so indelicately, to throw comic spears at the Daily Mail, suicide bombers, the settlers in the West Bank, Michael McIntyre, Piers Morgan, the late Pope, the Queen, Prince Philip … nothing was safe, it seemed, except bizarrely Arsenal football club, or at least their ground.
The Marxist in him couldn’t help referring to “the looting of our country” through austerity; but by the time he had got around to mentioning the “hope” presented by Jeremy Corbyn he had wrapped his right arm so far around his head it was almost as if he was putting himself into a headlock. “I don’t have the mind to cope with hope,” he said.
Running through it all was Sayle’s single-handed instigation of the alternative comedy revolution in the late 1970s and his leading part in “clearing sexism, racism and misogyny out of British television and light entertainment”. After a comic pause the only child of a Lithuanian-born Jewish pools clerk and a railway worker admitted: “There were other people involved.”
The finest image, though, was of the man who initiated comic punkish violence obliging an appreciative punter on being asked, instead of a signature, for a headbutt – and then running into a room and nursing his sore skull.