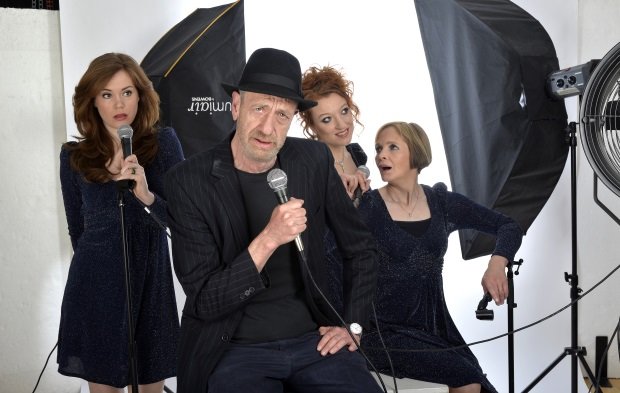 Arthur Smith was around at the start of alternative comedy; if he was directly involved with the conception then he was definitely around at the birth.  He is a star, a great comic and regularly makes me laugh heartily.  When I saw he was performing Arthur Smith Sings Leonard Cohen – The Final Tribute this year I had to see him.  This is his 40th year at the Fringe and he celebrates it with a wonderful tribute show, accompanied by the wonderful Smithereens.  Unlike Stewart D’Arrietta’s My Leonard Cohen, which is more about the man and his music, this is Smith paying homage to the songwriter.  The show is also poignant as Smith also weaves in part of his own life and personal history.

I must admit, I never had Arthur Smith down as a singer but he performs the songs really well.  He does a wonderful version of Hallejuah, which is already a favourite, as well as throwing in a lovely adaptation of the lyrics at the end of First We Take Manhattan.  On stage Smith looks like himself, at least until he puts on THAT HAT and suddenly he looks the part and could be the man himself.  The transformation is incredible and at times you have to pinch yourself to check who you’re watching.  Until you hear the South London drawl that is.

The support from the Smithereens is wonderful and they are very talented.  I would love to name them and give them the credit they so richly deserve but I didn’t catch their names.  Their vocals and harmonies are spot on, the keyboard playing is great and they all play their instruments perfectly.  Smith is blessed to have such talented musicians round him.  All round, this is a perfect show and I loved the Gina Lollobrigida reference.

Sadly, it is only on for three performances but if you can get a ticket for the next two – GO.  If you can’t, pester him to release it on DVD because it is a great performance.

Arthur Smith closed the show by saying he hoped to be back next year.  So do I mate, so do I.  Live long and prosper, as the other Leonard used to say.