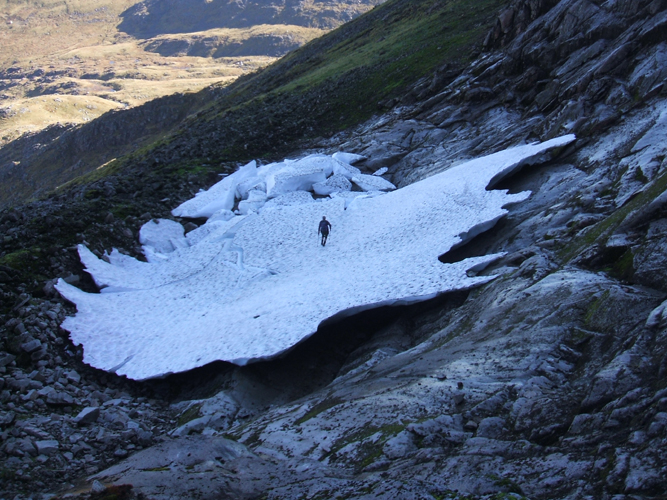 ‘A badger peed on my wellies once while I was wearing them. It was like being anointed by nature.’

Many of us are good at sitting still, but few of us see it as a necessity of life. For nature writer Jim Crumley stillness is a tool of his trade;

‘The way to have a meaningful relationship with wildlife and with landscape is to find a good place and be still in it.’ Jim’s ability to stay still has not only granted him an intimate moment with an appreciative badger, it’s also allowed him to produce many of his acclaimed books – Nature’s Architect, for which he watched beavers for hours on end, The Eagle’s Way, Badger, The Last Wolf, Swan. Jim’s latest book, however, proved a bit more of a challenge. Writing The Nature of Winter, the second of a tetralogy (he published The Nature of Autumn last year), brought with it fewer daylight hours and ‘the near certainty of getting very cold, very slowly.’ Nevertheless, Jim persevered, though he wasn’t too impressed with the particular season he’d been landed with; winter 2016-17 was ‘soggy, soggy, soggy.’ His first chapter is aptly titled ‘Whatever happened to bleak midwinter?’ And now he’s here in an equally soggy Charlotte Square with fellow writer Christopher Nicholson (below, image: EIBF) and chair Al Senter to talk to us about his work.

‘What I’m interested in is deep thought’ says Christopher. He’s also interested in deep snow. The novelist’s first work of non-fiction Among the Summer Snows is about the walks he took in the Scottish mountains last August, each of them a journey to find snow beds – those ‘astonishing’ patches of snow left behind as the winter turns to spring. If they weren’t so inaccessible, he says, the snow beds would be called one of Britain’s natural wonders.

‘They are prodigiously beautiful…in sun they glitter, in fog they have a ghostly appearance, in moonlight they are spectral.’ Among the Summer Snows isn’t just about snow beds – in fact Christopher questions whether it’s about snow beds at all. As he walked through the mountains he thought about the course of his life – his Surrey childhood, his romantic attachment to Scotland – and also about death. His wife, the artist Catharine Nicholson, died in 2011, and although when he set out on his expeditions he was determined not to think about her or about grief, he ended up writing about both.

He often wondered why he was there, trudging along looking at snow, when there was so much else that seemed so much more important going on in the world. What was the point of nature writing while the Syrian civil war was raging, and so many other terrible things were ruining people’s lives? He didn’t find all the answers, but like Jim he persevered, filled with the deep wonder that only nature can inspire.

Nature, says Jim, uses winter as the final preparation for spring. One of the first signs that not everything has given up is the golden eagles’ ‘annual festival of New Year’, when they announce their territory to one and all. They might be saying ‘keep off our patch’, but Jim would be the last person to try to second guess them. So there he is, up a mountain, ‘watching a perched golden eagle do nothing at all for four hours.’ No wonder he’s cold. But then the eagle starts to fall, it is ‘falling as an art form’. In his luminous, evocative prose Jim describes this magnificent bird;

‘no diamond ever shone with a finer lustre….power and elegance in equal measure’

For Christopher, the excitement of snow began, as it did for many of us, in childhood;

‘The good thing about snow is the surprise….the transformation of the world, even in the suburbs. We could walk in the road, everything stopped, school stopped.’ Christopher remembers the notoriously harsh winter of 1962-63 (right, at Grantown on Spey) with ‘immense vividness’, but despite many family holidays in the Highlands his interest in the snow beds didn’t begin till his thirties.  When he started to reflect on his life, these ‘blocks of time, dislodged from when they should have melted’ were part of his ‘new, adult sense of time, and of mortality.’

The snow beds are, he explains, enormous – even in late summer they can be the size of a football pitch and 10-15 feet high. The Scottish ones are precarious, melting fast, ‘surrounded by doubt.’

Some may survive right through to the following winter; last year seven did, and there is one group in the Cairngorms that’s only ever melted three times. Walking to them is ‘full of uncertainty…it puts your mind on edge.’

So how, asks Al Senter, can those who want to see them find the snow beds? Do they just start walking? Apparently people have been interested in them since the 18th century; by the mid-20th century biologist, ecologist and mountaineer Dr Adam Watson (A Snow Book, Northern Scotland, 2011) had started to monitor them, noting if and when they melted each year. In the past 30 years there’s been a concerted effort to record their activity.

‘The way I work you acquire some sort of intimacy with the landscape; if something happens you find out about it quite quickly. There is just now a restlessness in nature, a sense of something colossal going on.’ Al asks them about notes – do they take any? They both take loads, it seems, but Jim tries, when possible, to write full sentences while he’s out on the hills. One of his favourite nature writers is the little known Margiad Evans; in her Autobiograhy (a copy of which Jim says he bought for 75p – his enthusiasm for her must have started a gold rush, as the cheapest copy on Amazon today is £8 and one is £40) she advises anyone interested in ‘earth writing’ to conceal herself in a field and write;

‘There is no substitute for the touch of the daylight on the dream.’

They both prefer to walk alone – Christopher finds that only then do his thoughts ‘settle and begin to deepen’. And although Jim enjoys being up on the mountains with others, he finds that having company means that you interact with people rather than the landscape.

‘You need to give the landscape time to have a conversation with you.’

So, asks Al, do they long for a winter like that of 1962-63? Or would that restrict their access to the mountains? Nature, says Jim, is there for its own purpose, not his convenience (though he does have a 4 x 4 to help him out a bit). When he can’t get up to see them, he does wonder what the eagles, foxes, deer and ptarmigans are

making of it all. Christopher doesn’t mind being grounded; for him a wood in snow is still ‘fabulous and magical.’

Asked by an audience member to name their favourite nature writers of the past, Jim and Christopher both choose Seton Gordon. (The Cairngorm Hills of Scotland and numerous other publications.) Jim again:

‘He was the first guy to look at a golden eagle through a telescope rather than down the barrel of a gun.’

Christopher also chooses Richard Jeffries, who wrote in Wiltshire in the 19th century, and JA Baker (The Peregrine, which Robert Macfarlane has called a masterpiece of non-fiction.)

For Jim, Gavin Maxwell will always be a hero: ‘I was an 18 year old Lowlander from Dundee reading rubbish. In the middle of all that I found Ring of Bright Water and it blew me away, it was the single bolt from the blue. I read it and straight away I read it again. I still read it and still marvel at it. I knew immediately that that was what I wanted to do.’

‘I saw diamond dust blowing up the street in Stirling. It was like a visitation from winter.’

In a world where we think we know everything, nature is still full of surprises. We don’t always see them; sometimes it takes writers like Jim Crumley and Christopher Nicholson to open our eyes.

The Nature of Winter by Jim Crumley will be published by Saraband on 28 September 2017.