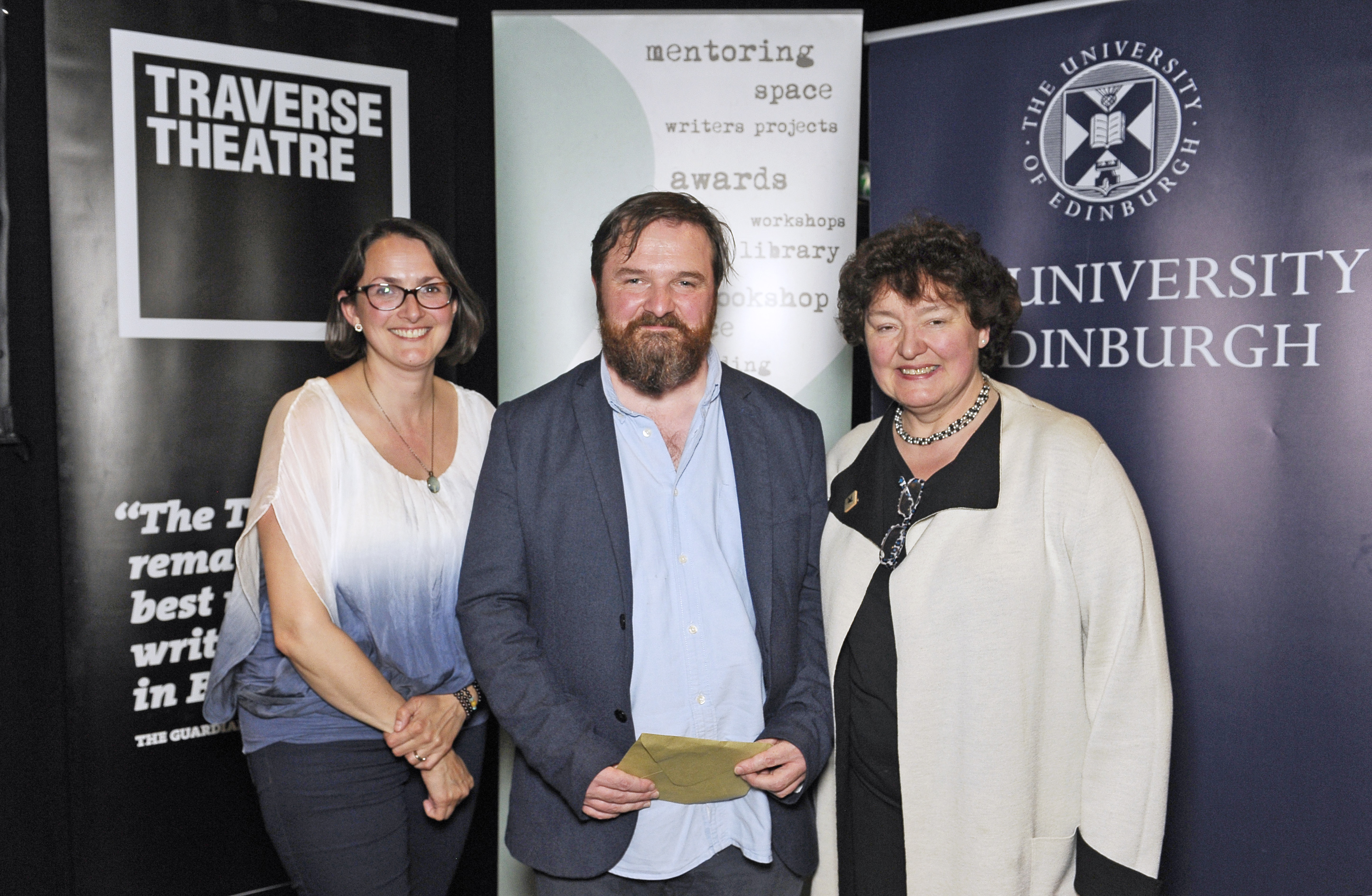 A play that explores the extremes of sectarianism has scooped one of the UK’s most distinguished literary awards, the James Tait Black Prize for Drama.

David Ireland’s confrontational tragicomedy Cyprus Avenue, which is set in Northern Ireland, is the fifth play to win the £10,000 prize – part of the UK’s oldest book awards. The news was announced at an award ceremony in Edinburgh’s Traverse Theatre earlier this week.

The accolade celebrates innovation in playwriting and is awarded annually by the University of Edinburgh in association with Playwrights’ Studio, Scotland and the Traverse Theatre.

Cyprus Avenue centres on Eric Miller, a Belfast Loyalist who is convinced his new born grandchild is Sinn Féin President Gerry Adams. At one point he puts glasses on the baby and draws a beard on her face with marker pen. The play reveals Eric agonising over his own sense of identity and masculinity.

The winning play was premiered at the Abbey Theatre in Dublin before its run at the Royal Court in April and May 2016, receiving critical acclaim. It was directed by the Royal Court’s Artistic Director, Vicky Featherstone.

David Ireland’s drama topped a shortlist that included two other plays: Oil by Ella Hickson and Scenes from 68* Years by Hannah Khalil.

Ella Hickson’s Oil spans 150 years, and centres on a woman called May and her daughter. May travels through time – first as a 19th century farmer’s wife with a newly invented kerosene lamp; then as a servant in 1908 Tehran; and, in 1970, as the CEO of an oil company. The play, which starred acclaimed actress Anne-Marie Duff, ends in a nightmarish post-oil future.

Hannah Khalil has created a series of everyday snapshots from life in Palestine in Scenes from 68* Years, which spans from 1948 to the present day. The cast of six play a range of Israeli and Arab characters, showing the human impact of the Israeli-Palestine conflict, where the war and home life are experienced side-by-side.

The drama prize, which was launched in 2012, is judged by emerging artists and established theatre experts, rather than critics. The accolade is awarded to the best new play in English, Scots or Gaelic, which demonstrates an original theatrical voice and makes a significant contribution to the art form.

The judging panel includes students and academics from the University of Edinburgh, representatives from the Traverse Theatre, Playwrights’ Studio, Scotland and Schaubuhne Theatre in Berlin.

Chair of the judging panel, Greg Walker, Regius Professor of Rhetoric and English Literature at the University of Edinburgh, said: “This year’s shortlist was incredibly strong – each playwright dealt with difficult issues masterfully. Cyprus Avenue is a shocking and darkly humorous play that shakes audiences to their core. It reflects exactly what this award aims to celebrate – bold, inventive playwriting – and I am thrilled it won this year’s prize.”

Fiona Sturgeon Shea, Creative Director, Playwrights’ Studio, Scotland, said: “It is a privilege each year to be involved in the James Tait Black Prize for Drama.  The shortlist reveals playwrights from across the globe being inspired by a huge range of issues and topics, creating unforgettable characters and situations, experimenting with form and language – and often being ahead of the curve in their understanding of the world and our place within it.”

Orla O’Loughlin, Artistic Director at the Traverse Theatre, said: “This year’s shortlist represents the impressive breadth and depth of innovation that the James Tait Black Award for Theatre seeks to champion. With Cyprus Avenue, David Ireland has created vibrant, urgent and provocative new play which speaks deeply to our turbulent times. I am delighted that David has won this year’s prize and congratulate him on his great success.”