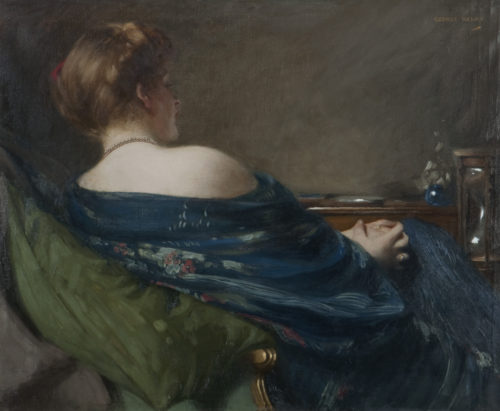 The Hour Glass by one of the leading painters of the Glasgow School, George Henry, is among the top lots at Bonhams Scottish Art sale in Edinburgh on Wednesday 11 October. It is estimated at £30,000-50,000. Henry (1858-1943) was born in Irvine, north Ayrshire, and his early life is shrouded in mystery: even his birth date has never been confirmed. He trained in Glasgow, and was among the pioneering Scottish painters of the last two decades of the 19th century exploring landscape, naturalism and the folklore of Galloway. In later life he moved to London where he enjoyed great success as a portrait painter. The Hour Glass was painted around 1910 and depicts his wife, who often posed for him. The kimono she wears may refer to the year he spent in Japan with fellow Glasgow Boy artist, Edward Hornel.

The Hour Glass comes from the collection of Scottish Art assembled by the Weir family, founders of the famous pioneering Scottish engineering company, The Weir Group. Other works from the Weir collection in the sale include Couple and Rainbow, a colourful painting by John Bellany (£12,000-18,000); a charming Still Life with Flowers by Thomas Dow (1848-1919), and several works by George Houston (1869-1947). Houston was best known for his landscapes, especially of Argyll, Ayrshire and Iona where he was able to pursue his other passion of fishing. The sale offers several examples of his work, including View of Iona and the evocative Winter Scene (£4,000-6,000).

Bonhams Head of Scottish Art, Chris Brickley said, “The Hour Glass has all the hallmarks of Henry’s mid-period work –  superb brushwork and a masterly control of palette. ‘The Weir family were great collectors of Scottish art and had superb taste – attributes which are particularly important to buyers looking for the reassurance of impeccable provenance.”