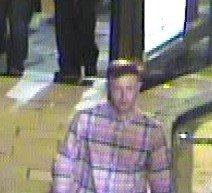 Police investigating a serious assault in the city centre have released images of a man that they believe may be able to assist them with their enquiries.

The incident happened at around 3.10 a.m. on Sunday 4th June near to the Espionage nightclub at the Cowgate. A 27 year old man was attacked and sustained serious injuries.

Officers would like to speak to the man shown in the image and would appeal to him or any members of the public who recognise him to contact them as soon as possible.

The male is described as white, mid-twenties, 5ft 11ins tall with a medium build, clean shaven face and short fair hair. He was wearing a pink checked shirt, blue jeans and white trainers. He was last seen leaving the Grassmarket in the company of other men and headed towards the West Port area.

Detective Constable Sheila Silvagni from the Violence Reduction Unit at Gayfield Police Station said: “This appears to have been a totally random and unprovoked attack, which left the victim with a painful injury to the back of his head.”

Anyone with information can contact the Violence Reduction Unit via 101 and quote incident number 934 of the 4th June. Alternatively, an anonymous report can be made through the charity Crimestoppers on 0800 555 111.