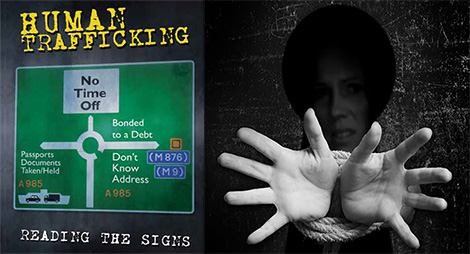 Police Scotland carried out a national day of action on Monday to raise awareness of human trafficking and to identify and recover potential trafficking victims.

Around 500 officers including 50 from partner agencies visited 80 premises and locations in all 13 geographical divisions of Scotland including fisheries, car washes and nailbars.

The activity was part of a National Crime Agency coordinated, ongoing response to the threat of modern slavery and human trafficking across the UK.

During the multi-agency operation a child aged 15, who displayed indicators of trafficking, was found working in a nailbar.

Detective Superintendent Stuart Houston, Police Scotland, said:”Our action yesterday was about highlighting and raising awareness of human trafficking which is happening in communities across Scotland now. We know that people are being trafficked into and around Scotland on a daily basis for the purpose of labour or sexual exploitation.

“Many businesses and industries are affected. During yesterday’s action, 500 officers visited premises including harbours and fisheries, food processing plants, to car washes and nailbars, on intelligence led welfare visits.

“Tackling trafficking is a priority for Police Scotland and we will use all of the means at our disposal to tackle trafficking and those who seek to enslave others. This includes working with partners and across national and international borders.

“Yesterday we again found a child who has been trafficked. People who exploit others have no conscience, they will exploit children and adults. Our intention is to stop them.

“I would encourage people to be aware of what is happening in their community, to have social and ethical awareness, and to report concerns that someone may be a victim of trafficking to Police Scotland.”

Police Scotland works with support agencies to ensure that all victims of trafficking identified are provided with help and support.

For more information visit our page on the Potential Signs of Human Trafficking.