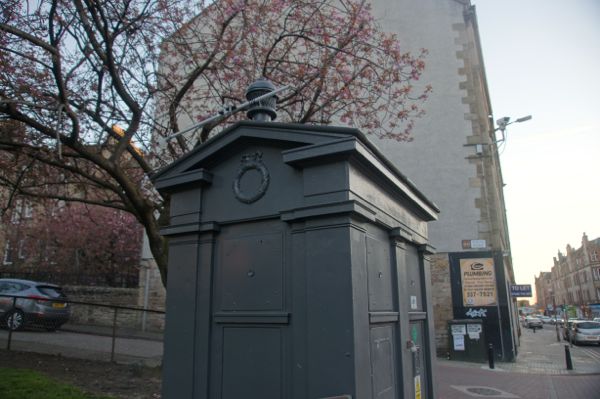 The home of Hearts Football Club, this is a ward which is also home to Gorgie City Farm which was in danger of closing in the last few years owing to a cut in funding from the council. Following a successful crowdfunding campaign the future of the city farm was assured.

There is also a police box with a tv aerial – the reason for which escapes us! The councillors at present are :

Eric Milligan is a former Lord Provost and has been a councillor for 43 years. His style, wit and knowledge will be missed from the City Chambers.

These are the candidates for Sighthill/Gorgie in 2017 : Denis was elected SNP Councillor for ward 7 – Sighthill/Gorgie in 2012. Since then he has been a member of the following committees: Health and Social Care; Education Children and Families;  Planning/ Development Management sub-committee; Finance and Resources, Governance, Risk and Best Value and Petitions. He chairs the SW Community Safety Action Group.

Councillor @DenisDixonSNP takes to us about being a councillor for Sighthill/Gorgie and hopes to be reelected pic.twitter.com/d6vtqnVLv9 Cathy Fullerton is presently the Councillor for Sighthill/Gorgie. She lives in her ward and is passionate about improving the lives of the people she represents.  She has served as Vice Convener on the Education Committee for the past 4 years.  Catherine is seeking a second term to further address the inequalities and poverty within the ward.

Councillor @cathyfullerton is determined to get reelected for her ward of Sighthill/Gorgie where she lives. Here she tells us why. pic.twitter.com/5fLvGreCF2

Cathy has produced what she calls an End of Term Leaflet explaining what she has accomplished in the last five years.

Ashley has been selected as the Scottish Conservatives & Unionist Party candidate for the Sighthill & Gorgie Ward in the Local Government elections in May.

Ashley attended Forrester High School in Broomhouse, and completed an NVQ Hairdressing apprenticeship at a top salon within Edinburgh City Centre, before progressing into Hair & Makeup Artistry. Since then, after further studies and training, she became a Rev and Founder of a charity, and her role includes being a Director and an Academy Principal; the charity offers courses, sessions, events, gigs, and the arts. Ashley is also a Trustee of a community centre, a community councillor, and is on the advisory board of a pioneering policy group.”

Ashley said: “I am delighted to have been given the privilege to stand for the Sighthill & Gorgie Ward, and standing up for those who want to give themselves and their families a better life. My passion and drive is to have local communities that work for everyone.
I want people to receive the best advantages and opportunities in life, regardless of background – as I did.

Ashley, a resident living near the Ward’s Dalry area, said, “I will work wholeheartedly to achieve what is best for our local communities as I believe the people of Sighthill & Gorgie Ward deserve a passionate and hardworking councillor that works for everyone – I will
be that person.”

“Over the coming months, I look forward to speaking to as many local residents as possible, on doorsteps and at local community events, to find out what your priorities are as your views and concerns are really important to us.” He is an experienced campaigner on a range of issues ranging from social justice, community engagement and supporting small businesses to name a few. He is a small business owner himself, employing local people in the Edinburgh. He attended and graduated from Edinburgh Napier University.

Here is @SimonGHayter who is standing as SNP candidate in Sighthill/Gorgie talking about why he wants to become a councillor pic.twitter.com/wCSpNz3XkN

Dan says he has a few priorities. He wants to : Carmel Smith is married and her husband is currently a serving military officer. She has 3 children, two serve in our local police and one works in finance. Carmel has worked for a charity in Edinburgh for the past 5 years. Carmel said: “As your local councillor, I will work hard to look after local people’s interests.” During the last five years Donald Wilson has been Lord Provost and Lord Lieutenant, a role he has very much enjoyed and made his own. He now wants to return to the City Chambers to continue his work as a councillor.

He has been a Councillor in Edinburgh since 1999, previously representing the Shandon Ward and then the Sighthill/Gorgie Ward since 2007.  Donald has led many successful campaigns such as the one to save the Gorgie War Memorial Hall.

During his time as Lord Provost he has raised around £250,000 for his charity the One City Trust which tries to help many other charities in the city with small grants.