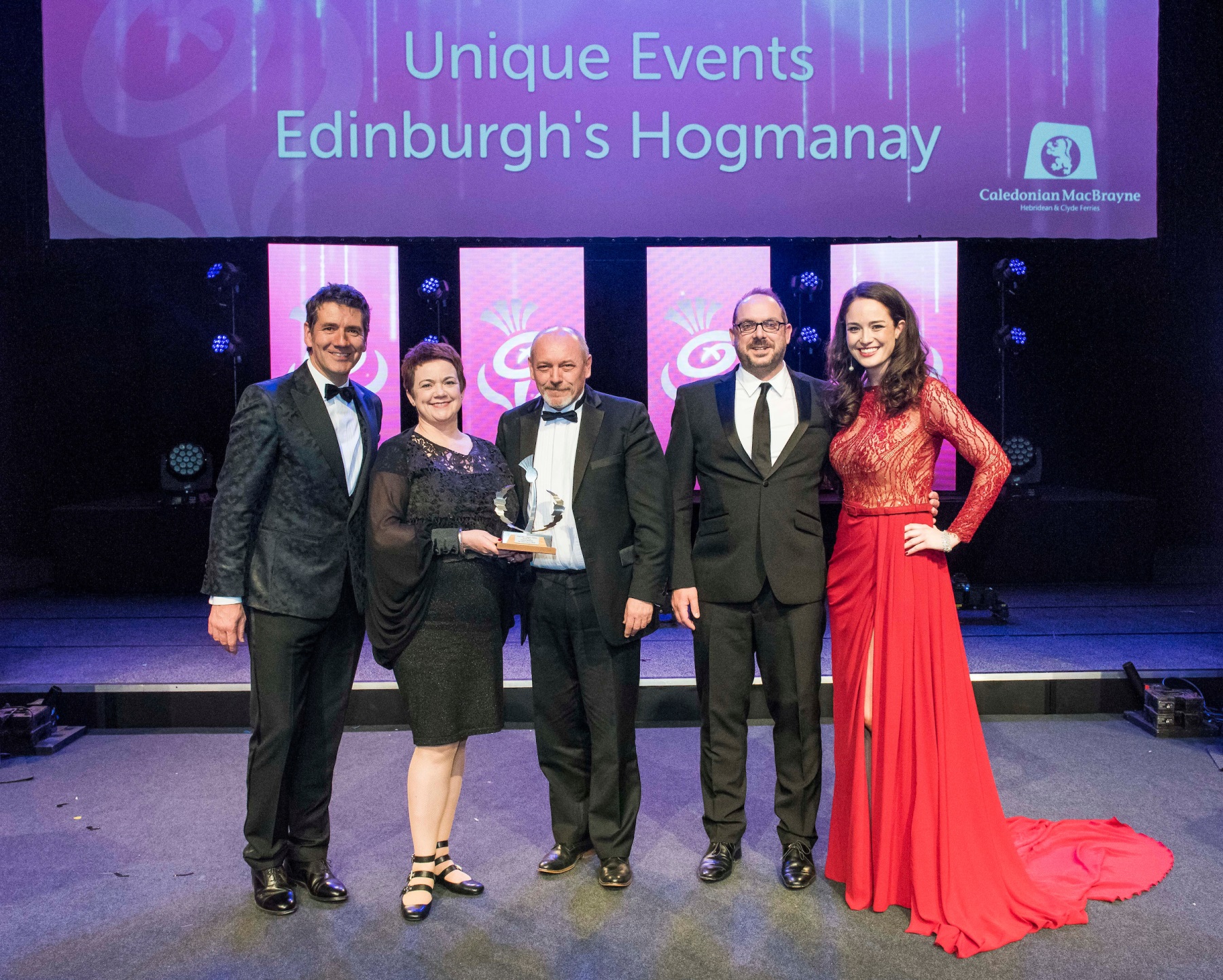 At the Scottish tourism Oscars last night there was much to celebrate in the capital. The EICC was full of tourism business movers and shakers from all over Scotland, but two of our own Edinburgh attractions won in their categories.

Unique Events organisers of Edinburgh’s Hogmanay won the Caledonian MacBrayne Best Cultural Event or Festival against stiff competition from other areas of the country, including Celebrate Aberdeen, Solas Festival in Perthshire, Oban Winter Festival and NVA’s Hinterland at St Peter’s Seminary. Judges mentioned in particular the ‘impressive impact’ of Edinburgh’s Hogmanay on the hotels in the city with 99% occupancy on 31 December.

Penny Dougherty Director of Unique Events said: “Unique Events are thrilled that Edinburgh’s Hogmanay has been awarded Best Festival at the Thistle Awards National Finals and would like to thank everyone who helps deliver this world-class event for Scotland.

“Edinburgh’s Hogmanay puts Scotland on the world stage for New Year celebrations and we’re proud to welcome visitors from over 80 countries to celebrate here at the ‘Home of Hogmanay’.”

The National Museum of Scotland was described by judges as one of the world’s greatest museums and picked up the Scotrail Best Visitor Attraction award.

Gordon Rintoul, Director of National Museums of Scotland said: “2016/17 was an important year in which we celebrated the National Museum of Scotland’s 150th anniversary with the opening of 10 innovative new galleries. They’ve been a huge hit with our visitors and we’re delighted to be recognised and receive the Scottish Thistle Award for Best Visitor Attraction.”

“The Scottish tourism industry and hospitality sector prides itself on delivering a rewarding experience for visitors and all of our finalists should be proud of their achievements in reaching the final – which, in itself, is both a recognition of excellence and innovation, and a sign of quality.

“Tourism is the heartbeat of the Scottish economy – supporting communities and creating jobs throughout the year in every corner of the country. We look forward to the 2017/18 Scottish Thistle Awards when we will celebrate the achievements of our industry colleagues during our 25thanniversary year.”

Manuela Calchini, Regional Director at VisitScotland, said: “Huge congratulations to Unique Events and the National Museum of Scotland for being crowned the best in Scottish tourism.

“Tourism is more than a holiday experience – it creates jobs and sustains communities across Edinburgh and the Lothians and all finalists should be proud of their achievements in reaching this stage.

“These awards recognise the drive and passion the industry has for creating an unforgettable experience for visitors and I’m delighted that some of Scotland’s top visitor attractions are found right here on our doorstep.”

The event was sponsored by Fishers and recognises innovation, excellence and success in the hospitality and tourism industries.