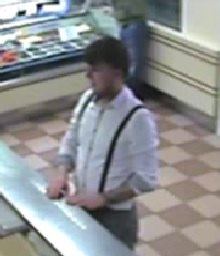 Police have released CCTV images of a man they wish to trace as part of an investigation into a serious assault which took place around 7.30pm on Tuesday 28 February in Duddingston Park South, outside Scotmid and Duddingston Fry.

A 32-year-old man was subject to abuse before being struck to the face with a weapon.

The victim sustained a broken jaw and lost several teeth as a result of the attack and was taken to hospital for treatment.

The man pictured is described as white, early to mid-twenties, 5ft 8ins tall with short black hair and wearing a white shirt, black trousers and braces.

Detective Constable Iain Wallace from the Violence Reduction Unit said: “This attack has seen the victim sustain serious facial injuries and we’re currently pursuing various lines of inquiry as part of our investigation.

“Anyone who may recognise this man, or who witnessed the incident itself, is urged to get in touch with officers as soon as possible.”

Those with information can contact Police Scotland on 101 or report this anonymously to the charity Crimestoppers on 0800 555 111.