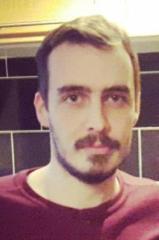 Police are appealing for information to help trace a man reported missing from the city centre.

James Reid from Northern Ireland was last seen in St Mary’s Street at around 3pm yesterday.

Since then, however, the 27-year-old has failed to return to his hotel or make contact with any friends or family.

Concern is now growing for his welfare and anyone who believes they know his current whereabouts is asked to come forward.

Sergeant Kris Harvey from Gayfield Police Station said: “James is in Edinburgh for work and was supposed to leave on Wednesday evening, but didn’t return to his hotel or catch his flight back to Belfast.

“At this time it is unknown where he is or how well he knows the city and so we’re keen to trace him as soon as possible.

“Anyone who believes they know where we can find him should contact police immediately.

“In addition, we would also urge James to get in touch and let us know he is safe.”