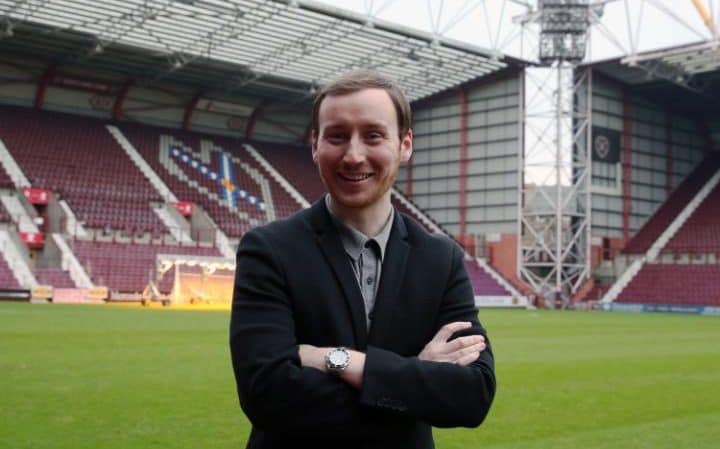 It was George Bernard Shaw, the famous Irish playwright and socialist who once said ‘He who can, does; he who cannot, teaches’

It’s a quote that could be applied to attitudes in Scottish football, in particular on how players and teams are managed. A couple of incidents in the last couple of weeks, involving Edinburgh’s two biggest clubs have highlighted this.

Firstly, Hearts Director of Football Craig Levein was under the spotlight during the televised Ladbrokes Premiership game with Aberdeen at Pittodrie. The former Hearts and Scotland defender, a stylish player in his day, was filmed passing a note to assistant coach Jon Daly who then nipped from the stand to pass said note to Head Coach Ian Cathro on the touchline. Cue outrage from many in the media. ‘Who on earth is in charge?’ gasped BT Sport pundit Chris Sutton. Some of the printed press said Levein had been ‘caught on camera’ as if he had committed a mortal sin.

The furore over the incident attracted bemused looks from clubs in Europe where the model of Director of Football and Head Coach has been in place for many years now. Indeed, many of Europe’s top clubs have their Director of Football standing on the touchline alongside the Head Coach. ‘Cathro is just Levein’s puppet’ scream the uneducated which would be mildly amusing if it weren’t for the fact that some people who really should know better are illustrating just how Scottish football remains in the dark ages.

This week, former Hearts captain Steven Pressley threw in his tuppence worth and said his former manager should really stay out of the dressing room during games. ‘Craig’s presence, because I know how a dressing-room works, gives players excuses and that’s what you don’t want within a football club.’ Pressley told BBC Scotland.

Pressley served Hearts well as a captain a decade and more ago and no one will forget the images of him holding aloft the Scottish Cup at Hampden in 2006 after defeating Second Division Gretna after a penalty shoot-out in the final. However, he is probably remembered more for his press conference at Riccarton in 2005 when, along with fellow Hearts players Paul Hartley and Craig Gordon, he told the media ‘there was significant unrest in the Tynecastle dressing room’. This was a clear reference to dissatisfaction with then Hearts owner Vladimir Romanov. Unsurprisingly, Pressley would leave Gorgie and signed for Celtic. Painful as that was for Hearts supporters, it was nothing to the anger they felt when Pressley thumped his chest in a gesture towards the Celtic supporters when his new team visited Tynecastle. One felt if Pressley had any respect for the Hearts support he would have merely left the park with some degree of dignity when the game ended. To hear him now speak of how things should be done at Tynecastle sticks in the throat like a bitter pill which is difficult to swallow.

Such attitudes underline why Scottish football is in the depths of despair. Scottish clubs struggle annually in European competition. We now celebrate if one of our teams makes it beyond the qualifying stages of either the Uefa Champions League or the Europa League. Celtic, Rangers and Aberdeen have all lifted European trophies but the last of those triumphs was 34 years ago. European football has not so much passed Scotland by as lapped us several times over. Yet, many clubs still persist with outdated methods. The manager buys the players, picks the team, deals with contract negotiations, makes the tea and wipes the players’ backsides if required. But when a club like Hearts opts for a different method of operation, many of the ‘old guard’ behave like sniggering schoolboys, never too shy to voice an opinion no matter how outdated it might be.

Cathro is in his first Head Coach appointment and he would be the first to admit he needs all the help he can get. Levein, Daly and Assistant Head Coach Austin McPhee all contribute and offer advice. Which is how it should be. What if Levein had spotted something that Cathro hadn’t at Pittodrie – but kept it to himself? How is that going to benefit the team? And one can only imagine the outcry from certain sections of the media. To say this gives the players excuses is balderdash.

The second incident I refer to also underlines attitudes to football in this country. Hibernian manager Neil Lennon was sent to the stand at the end of last night’s Ladbrokes Championship game with Greenock Morton at Easter Road. This was after an ‘altercation’ with Morton boss Jim Duffy, a man who was once not only Hibs manager but Hearts Director of Football (appointed by the aforementioned Vladimir Romanov no less) Apparently, the phrase ‘square go’ was used as two senior figures of Scottish football temporarily took leave of their senses (Duffy has today denied using this phrase) It was behaviour which, if it had happened among the fans heading along Easter Road after the game, may well have resulted in Police Scotland making an arrest or two. But there was no sniggering from the Fourth Estate this time.  No, this was two top managers displaying their ‘passion and commitment for the game’  and ‘if only the players showed the same commitment then the game wouldn’t have ended in a dismal goalless draw’.

Lennon seems to attract controversy like a jar of honey attracts bees. When he was Celtic manager, he was involved in a similar incident with the then Rangers assistant manager Ally McCoist in 2011. He has been scathing of his players at times this season as Hibernian try to return to the top flight of Scottish football at the third time of asking. Again, this is the old school approach. Sir Alex Ferguson and Jock Stein were two of the masters of this style of management. However, both men were the product of a very different working class era. Ferguson worked on the shipyards in Govan and Stein down the Lanarkshire coal mines and were of a generation where hard physical graft was second nature and behaviour reflected this tough environment accordingly. Even in the 1970s, when I left school and began earning a wage, my various managers would display their exasperation towards me by threatening to boot my behind with their size ten Dr Marten’s boot – or at least showing me the door and telling me to collect my ‘cards’ on the way out.

Society has changed dramatically in the decades that have followed. Anyone threatened with physical violence at work now can, quite rightly, head to an employment tribunal. Attitudes in the workplace have changed and the once oft-used doffing of the cap to those in charge now no longer applies.

However, some elements of Scottish football have not changed with the times. But some have. Hearts, under the leadership of Ann Budge, have chosen to gown down the progressive route to take the club forward. Yes, this season has been a struggle at times for the Maroons and a change of Head Coach midway through the season has contributed to this. Performances of late, particularly away from Tynecastle, have not impressed. The loss of three of the back four – Callum Paterson and John Souttar are recovering from long-term injury and Igor Rossi departed for Saudi Arabia – has meant emergency signings were required to patch up the defence. Given new players were drafted in on temporary agreements midway through the season has meant the results and performances have not been great. Hearts moved into second place in the Ladbrokes Premiership on the last day of November – Robbie Neilson’s last game in charge. Now, four months, later Hearts are in fifth place. While Hearts fans are unhappy at this should they really be surprised? Paterson, Souttar and Rossi were huge losses for the team.

The cup defeat to Hibernian was a hard one to take. Made all the harder by the fact this happened at the same time last season. There were calls then for Robbie Neilson’s head just as there are now for the head of Ian Cathro. But Hearts present Head Coach needs to be given time. I’ve heard some fans say Cathro’s demeanour suggests he is out of his depth. Why? Just because he doesn’t heavily criticise his players after a bad result? Or he doesn’t invite fellow Head Coaches or managers to a ‘square go’?

Cathro is a thinker, an obvious diligent student of the modern methods of football. But still far too many people in Scotland sneer at this, as if ‘we’re Scottish – who can tell us anything about football? We invented the game for goodness sake.’

Well, a wee look at the record of our clubs in European competition or the lamentable record of our national side – 27 years have passed since Scotland last won a game at a World Cup finals – will show the stark truth. Attitudes among current professionals, past professionals, managers, head coaches, directors, media pundit and supporters need to change.

Scottish football needs to adopt an innovative approach. The old adage is if you don’t change you won’t move forward. The danger is if the game in this country doesn’t move with the times, it will remain stuck in the past. Old school against the school of thought? It’s time to move with the times.