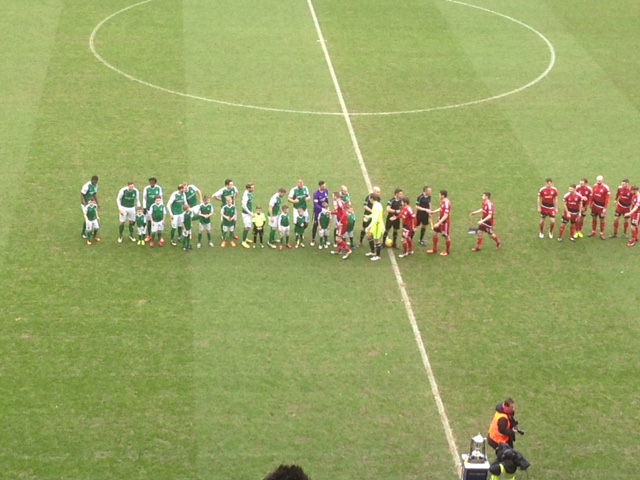 Hibs are heading back to Hampden Park for an incredible ninth time in five years after a comfortable 3-1 victory over ‘bogie side’ Ayr United at a misty Easter Road this afternoon.

Since 2012 Hibs have won four times and lost four times at the National Stadium including last May’s historic victory in the Scottish Cup final against Rangers.

Neil Lennon made two changes to the starting XI that lost to St Mirren in midweek. Jordon Forster returned from injury to partner Efe Ambrose in the centre of the defence, replacing the suspended Darren McGregor whilst Grant Holt took over from Fraser Fyvie.

The Scottish Cup was on display as the players took the field and in the opening minute Scott McKenna clattered into the back of Holt who required treatment. The defender was spoken to when a card would have been a more appropriate response.

Hibs took the lead in the sixth minute when John McGinn curled a sensational 25 yard strike into the bottom corner of the net after referee Nick Walsh had obstructed Andrew Shinnie in the build up.

Holt then set up Shinnie but Fleming produced a great save as Hibs totally dominated possession.

In the 30th minute, Shinnie was bundled over as he was about to shoot but the referee waved away his penalty appeal.

Two minutes later Ayr pulled one back with a contender for ‘goal of the season’ from Craig McGuffie who fired a sensational strike into the ‘postage stamp’ from 25 yards leaving Ofir Marciano helpless.

Just before the break, Ayr were reduced to ten men when McKenna was sent off for a reckless challenge on McGinn just outside the ‘D’.

From then it was one way traffic and Hibs almost wrapped things up in the 54th minute when Cummings found Boyle who set up Shinnie but his shot was blocked.

Cummings and McGinn both went close with long range efforts as the referee made several debatable decisions to the annoyance of the Hibs’ supporters.

Boyle had the ball in the net in the 73rd minute but his effort was ruled out for offside then Cummings was replaced by James Keatings.

The substitution paid immediate dividends when the midfielder headed home a David Gray cross which bounced over the line off the underside of the crossbar to restore their two goal advantage.

With 10 minutes remaining Holt almost made it 4-1 but his header was cleared off the line and Hibs held on to secure their place in the semi-final.

After the game a delighted Lennon said: “I thought we were very good. It was emphatic. I’m very excited but I’d swap it for promotion.”