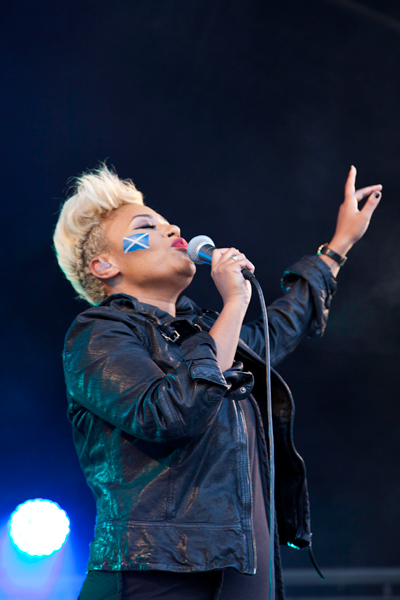 Emeli Sandé is coming back to Edinburgh Castle on 13 July 2017 as part of her Long Live the Angels world tour.

We say coming back because she last appeared at the castle during the Olympic Torch relay in 2012 as you will see from our photo.

Mark Mackie, director of Castle Concerts said: “It is with great delight we are able to announce today that the multi-awarding winning artist, Emeli Sandé as the third act to play Edinburgh Castle this July.

“Over the years, Edinburgh Castle has played host to many international stars such as Rod Stewart, Blondie, Elton John, The Proclaimers, Leonard Cohen, Stereophonics, Sir Tom Jones and Pink. So, its great to be introducing the award-winning Emeli Sandé to this world-renowned venue.”

A lot has happened to the singer in the four years since her acclaimed number one record, Our Version Of Events.

Nick Finnigan, Executive Manager of Edinburgh Castle said: “It’s fantastic news that an artist like Emeli Sandé, a hugely respected and globally recognised Scottish performer, will be a major part of our forthcoming Castle Concerts programme. We look forward to welcoming Emeli to Edinburgh Castle.”

The Aberdonian scored three UK number 1 singles and the track; ‘Next to Me’ was certified platinum in the U.S with over 1.5 million singles sold.

She has won numerous accolades including 4 Brit Awards (Critics Choice, Best Album and British Female Solo Artist in both 2013 and 2017) as well as awards from Q Magazine, Elle, Harpers and GQ.

The multi-instrumentalist initially made her mark as a songwriter in the UK urban scene via acts such as Wiley, Wretch 32 and Chip, later becoming a highly sought-after writer for a wide array of international acts including Alicia Keys, Rihanna and Katy Perry.

Her second album Long Live The Angels was released last November and received wide critical acclaim and achieved the biggest week one sales for a British female solo artist in 2016.