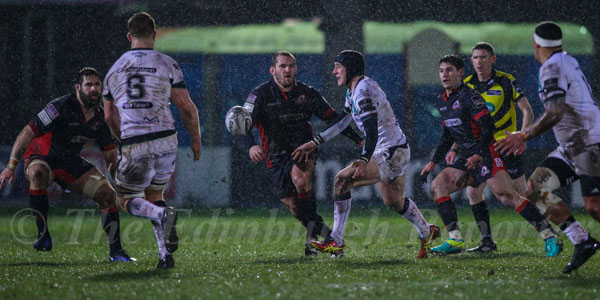 Ospreys win under a deluge at Myreside Conditions for Friday night’s Guinness PRO 12 match at Myreside between Edinburgh and Ospreys were such, that Noah might have thought twice about setting sail as the heavens opened just before kick off and remained open until well after the final whistle.

Prior to the kick off, there was a minute’s silence held in respect of Ellie Norkett, a Swansea Ladies and Ospreys player, who was sadly killed in a car crash last weekend in her native Wales.

With Ospreys hoping to head the table, and Edinburgh hoping to stop a run of losses, all of the first half scoring took place in a narrow window of play around the middle of the half with exchange of penalties and an Ospreys’ converted try.

The first quarter of the match was mostly played in the centre of the field with both sides having a few darting runs into the opposing 22, but neither try line came particularly under threat.

The first points came via a penalty from a collapsed scrum which referee, George Clancy, had ruled in favour of the home side. Stand off, Duncan Hodge, stepped up to do the honours and his successful kick gave Edinburgh a 3-0 lead with 15 minutes on the clock.

Two minutes later, his opposite number, Sam Davies, replied for the Welsh side for 3-3, following a high tackle around the 10 metre line.

Ospreys then scored the only try of the match not too long after the restart. Winning their lineout on the right touch line, the ball was swung left then, while play was returning, a neat inside pass from Davies put centre, Josh Matavesi through a huge hole in Edinburgh’s defence, with the No. 12 galloping the 20+ metres to dive under the posts unopposed. Davies then added the extras for 10-3.

The following 15 minutes, or so, were back to the probing rugby of the first 15, with a couple of kicking duels to clear the lines and the odd, unrewarded 22 incursion.

With two minutes to go, and lock, Ben Toolis off for an HIA, Edinburgh launched an assault on the opposition line, rucking and passing their way from side to side. Despite the pressure, the away defence held and the episode, and the half, ended with an Edinburgh fumble and a scrum to the away side.

With the rain still hammering down it was a fairly wet and subdued crowd that was ‘looking forward’ to the second half on the increasingly soggy pitch. And, to be honest, it wasn’t great. Edinburgh did, however, tend to dominate proceedings, both territorial- and possession-wise, but strong opposition defence, combined with a slippery ball prevented them making much of their advantage. A 68th minute penalty from Davies and two penalties from Weir – on 63 and 72 minutes – brought the score line to the final 13-9 in favour of Ospreys. Edinburgh only managed to seriously threaten the line on one occasion, but that attack also ended with a lost ball.

All-in-all, not a great night, either of or for, rugby and a fairly sparse crowd brought back memories of BT Murrayfield. However, a couple of thousand in Myreside don’t look anywhere near as lost as the same number in the National stadium, so it may turn out to be a good call by Edinburgh Rugby at the end of the day.

And, hopefully, another good call will be the appointment of Richard Cockerill – formerly of Leicester Tigers and Toulon – as the new head coach to replace, the interim, Duncan Hodge, will be the fillip needed to return the home side to a winning side. Expect fireworks!