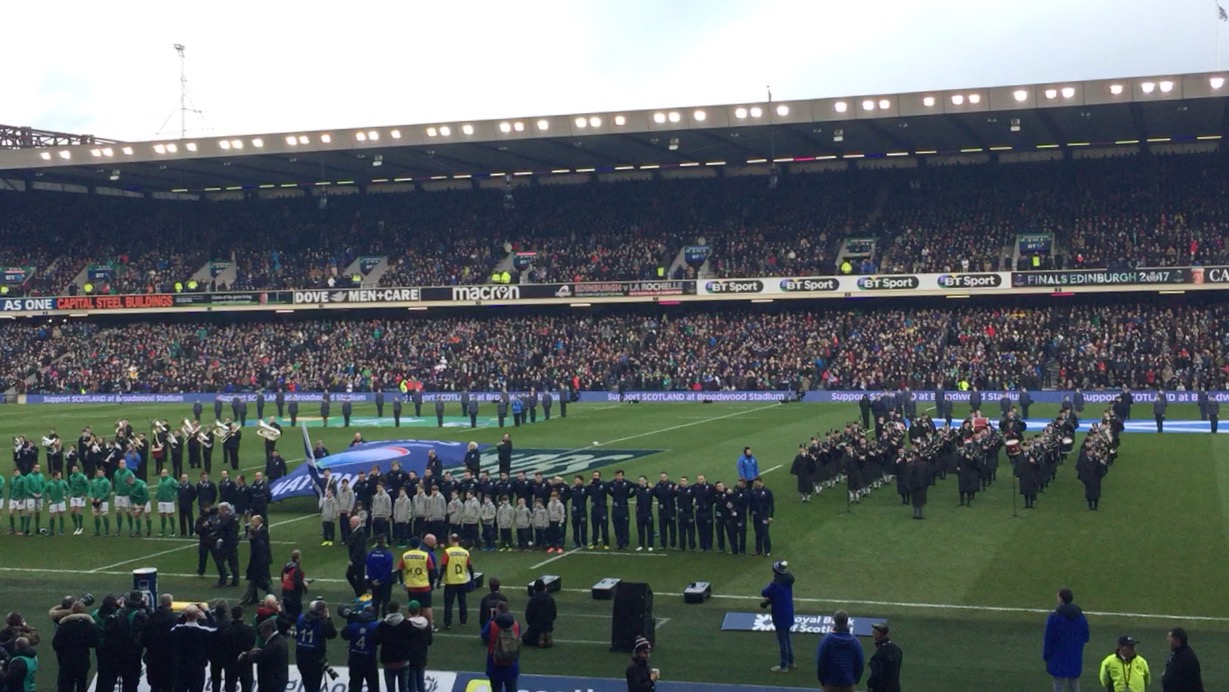 Another heroic performance from Stuart Hogg and the dark blues stopped the Irish fightback in a hotly contested Six Nations opener.

This was a dramatic start to the Six Nations Championship as Ireland were beaten by an in-form Scotland side brimming with confidence.

Mercifully the weather held off and one of the best Six Nations openers at Murrayfield unfolded.

The hype around the Scottish team leading up to the tournament feels well deserved after this performance, reminiscent of the form Glasgow have produced on the European stage.

Stuart Hogg was rampant at full back, his blistering pace and eye for space means his place in the British and Irish Lions team is surely now a certainty and his man of the match performance and two tries made the difference.

The team held their own, Scotland captain Greig Laidlaw’s decision making was vital, Richie and Johnny Gray amongst many others put in a shift and the win was the least their performances deserved. The omission of WP Nel from the line up was a source of concern but Ireland failed to make their dominance at the scrum pay. An impressive first half display by Scotland, putting three tries on the scoreboard, built a platform that withstood the inevitable Irish onslaught at the start of the second half. The resurgence from Ireland was ferocious, but ultimately they gave themselves too much to do.

Scotland took their chances when going forward and their defence held up remarkably well in the first half to take a 21-8 lead into the break.

Ireland hit back with a flurry of tries to take a two point lead before Scotland sealed the win with two penalty conversions late in the game to win 27-22.

After a high intensity start a smart passing phase by Scotland ended with an unfortunate knock on after a mix up between Finn Russell and Huw Jones. The Scottish scrum also seemed to misfire in the initial stages of the game with a few penalties awarded against Allan Dell.

A pivotal moment in the game came soon after as Ireland turned down an opportunity to take three points after kicking two penalties into touch near the Scottish try line. Perhaps the Irish team sensed this was going to be a high scoring affair or perhaps a shade of overconfidence crept into the Irish side’s thinking.

Rory Best was caught accidentally offside after separating from the maul just yards from Scotland’s try line, and with that Irelands chance to hit back immediately was gone.

Having weathered that spell of Irish possession, Scotland came knocking again and delivered in style, this time Hogg running the best part of forty yards to score yet again. After only their second significant attack Scotland once again cut through the Irish defence and the crowd at Murrayfield were again in rapturous applause.

The Irish did retaliate soon after the second try, as the Munster winger Keith Earls burst through Scottish lines for Ireland’s first try. The Irish attack was tantalisingly close to being scuppered as Tommy Seymour almost swept up Simon Zebo’s long wayward pass.

Scotland were almost immediate in their response when a five metre line out drill outfoxed the Irish defence. Inside centre Alex Dunbar could have pirouetted across the try line if he had wanted, catching the ball and diving across the try line completely unchallenged.

Ireland managed to pick up a penalty but Scotland mounted serious pressure on the Irish defence before the end of the first half and were pressing for a fourth try before Zebo pinched the ball from Alex Dunbar. His kick and chase was an exhilarating end to an energetic first half.

The defeat of New Zealand was now long forgotten and the ashen faced Irish side came out with a sense of determination in the second half that was necessary to make this game salvageable.

The Scottish defence had so far stoically withstood everything the Irish could muster, albeit a one dimensional Sexton-less offense, but Paddy Jackson offers a different kind of game, not quite blessed with the same ability to control a game or to steer the defence out of trouble with his boot. He made incisive and dinky runs and plenty of crafty passes but he failed to dictate the tempo of the game and even with the mainstay of possession Ireland were simply going through the phases in the first half without looking threatening.

This all changed in the second half and Ireland dominated possession but this time with purpose and guile.

Within ten minutes of the restart, Ireland stormed into the Scottish 22 and Ian Henderson scooped the ball up from the foot of a ruck on the Scottish try line and dived over for the try.
Another Irish try was to follow after the onslaught of possession was beginning to take its toll, the Scottish defence began to grow weary and tackles that were made in the first half were beginning to be missed as the game wore on.

Huw Jones, a man many expect to make an impact in this Six Nations was substituted by Mark Bennett. He returned from injury and had not played since the autumn tests, so he may have lacked the necessary match sharpness for his Six Nations debut to shine in the way he did against Australia, but there is still time in this tournament left for him to make an impact.

Ultimately Scotland’s game management and the coolness of Greig Laidlaw made the difference at the final period of the game. Scotland’s brief foray into the Irish half led to two kickable penalties in quick succession, converting the first and kicking into touch for the second, winding down the precious minutes before winning another penalty and sealing a hard earnt and well deserved Six Nations victory.