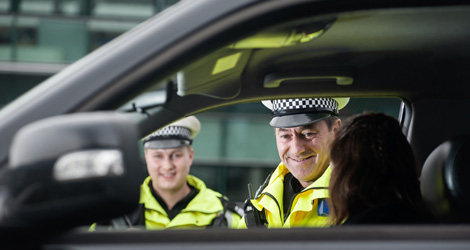 A total of 206 drivers had their cars or vans seized at the side of the road due to them lacking proper insurance cover or a valid driving licence during a week-long crackdown.

Uninsured drivers were targeted by Police Scotland, in partnership with the Motor Insurers’ Bureau (MIB), during a week of action which started on Monday 30 January and ended on Sunday 5 February 2017.

A total of 349 drivers were detected driving whilst uninsured during the campaign and during the same period, 206 vehicles were seized for being uninsured or unlicensed.

The campaign, which was delivered through a combination of mobile and static road checks throughout Scotland, involved officers from Police Scotland’s Road Policing Division who were deployed with the latest intelligence to target uninsured drivers and hotspot areas.

Superintendent Fraser Candlish, Deputy Head of Road Policing for Police Scotland, said: “These figures demonstrate that there are still some drivers who continue to drive their vehicle without proper insurance cover. Although the campaign has now ended, we will continue to stop those drivers using uninsured vehicles and remove their vehicles from the roads.”

Neil Drane, Head of Enforcement Services, at MIB said: “The significant assistance offered by Police Scotland in running the week of action has been invaluable. Proving there is nowhere to hide and with over 200 uninsured vehicles being seized from uninsured drivers, the roads of Scotland are safer for now.

“It is clear that the partnership approach between MIB and Police Scotland will need to continue to target uninsured drivers and we look forward to forging an even more effective partnership by increasingly working together in the months ahead.”

Transport Minister Humza Yousaf said: “Police Scotland and the Motor Insurers Bureau’s joint campaign has successfully highlighted to drivers in Scotland the importance of having the correct insurance in place at all times.

“The Scottish Government is committed, through Scotland’s Road Safety Framework to 2020, to achieving safer road travel in Scotland through a partnership approach“I hope my example reminds others to check their policies to make sure they are properly insured at all times of the year, and I remain committed to my work to striving towards the challenging casualty reduction targets set out in the Framework.”