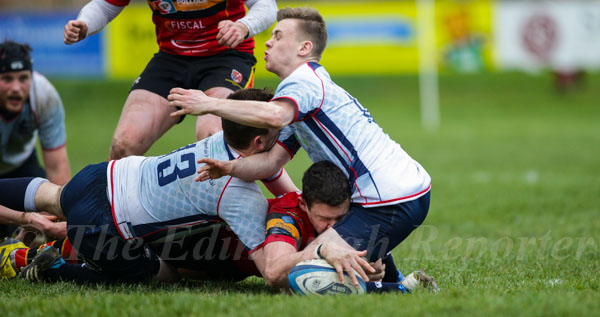 The game began with an exchange off the boot, the rugby ball remained largely in the air for the opening few minutes before Selkirk took the initiative early on to give the visiting crowd belief that they might take something from the game.

The first turnover of the game came on six minutes as the Stuart’s Melville scrum misfired and the ball was lost forward. Selkirk’s number 8 Ewan MacDougall carried well from the set play, punching through the Stuart’s Melville defensive line before mounting their first attack. Camped on the Stuart’s Melville 22, Selkirk’s stand-off Gavin Craig made 5 yards before winning a penalty, but a stoic defence withstood the initial onslaught and they appeared to have weathered the early storm. On the 16th minute of the game the Selkirk centre Gavin Craig finally made their possession in the Melville 22 pay after giving the defensive line the slip with an injection of pace that beat four players before finding Ciaran Whyte who finished off the move.

Gavin Craig was excellent in the opening exchanges, kicking well to keep the pressure on Stuart’s Melville and opening up space in the defence to make their early dominance pay. Ciaran Whyte kicked the conversion and on 17 minutes the score was 0-7 to Selkirk.

After another good line out by Selkirk, who were having considerably more success with set plays than Stuart’s Melville were, Peter Forrest carried well, before a huge tackle on Ciaran Whyte almost dispossessed him. They continued to press on into the Stuart’s Melville 22 and were awarded a penalty for an infringement at the ruck, Ciaran Whyte converted making it 0-10 on the 23rd minute.

After the restart, Stuart’s Melville lost possession in midfield twice after handling errors and line out malfunctions ensured possession went straight back to Selkirk. But soon after the nerves settled as winger Sean Murchie made ten yards before passing to Seb Trotter who ran in for the try on the 28th minute. A strong response by Stuart’s Melville and the confidence of the team was noticeably lifted after a wobbly start. After kicking the conversion the score was 7-10, being only 3 points up after such a period of possession must have been disheartening for the travelling side as they were made to be pay dearly for a lapse in concentration.

Selkirk aimed to respond immediately but monstrous tackles by John Grant and the Stuart’s Melville defensive line kept Selkirk at bay. Selkirk were awarded a penalty for their sense of adventure but a miscued kick missed touch and handed possession back to Stuart’s Melville once again. John Grant received treatment for an injury to his elbow and was subbed for Craig Wilis on 35 minutes. A wild forward pass by Selkirk’s Michael Davies led to a Stuart’s Melville penalty but their inefficient scrum once again misfired and Selkirk relieved the pressure and kicked the ball into touch. Errors began to creep into the Selkirk set piece and the ball was scooped up by Stuart’s Melville after a poorly thrown line out. Jack Hannay made ten yards in the middle of the pitch after a successful hand off and winger Sean Murchie was unlucky not to be awarded a try after diving over the Selkirk try line. The Selkirk line out was scuppered and the pressure on the Selkirk defence began to build once again, but Andrew Warnock ran into a wall of tackles and Selkirk were awarded a penalty. Deep into injury time Stuart’s Melville won another penalty and sustained pressure on the Selkirk try line ended with an Angus Wallace try as the prop powered over to make the score 12-10, with the conversion their lead increased to 14-10 just before the half time interval.

Selkirk started the second half well applying pressure on the Stuart’s Melville defence and a Ciaran Whyte dummy pass made another ten yards before a sustained attack led to a Selkirk penalty.  Whyte converted the penalty to make the score 14-13 on the 45th minute.

A kick and chase by Seb Trotter ended with a huge hit on Selkirk’s Michael Davies and Stuart’s Melville emerged with the ball. A largely exciting spell was to follow but poor set pieces marred both sides opportunities to gain any points. Midway through the second half after an exciting spell of end to end rugby notable for the number and variety of kicks made, the referee had to have a quick word with the captains to cool tempers that were beginning to boil on both sides.

After a fairly even start to the second half Stuart’s Melville began to ramp up the pressure and began to stretch the Selkirk defence.  After a relentless period of pressure in the Selkirk 22, a yellow card was awarded to Selkirk’s James Bett after he ignored the referee’s instructions after straying offside on the 65th minute. The try was to follow soon after as James Ferguson dived over the try line, the conversion was on target and the lead increased to 21-13. A penalty on the 71st minute to Selkirk, pulled back the score to 21-16, but there was not enough left in the tank for Selkirk with a man in the bin to launch a credible fight back.

An entertaining and engrossing match that was marred by a few too many set piece errors ended with Stuart’s Melville as deserved winners. The highly watchable end to end period in the second half kept pulses racing and any number of lucky bounces could have led one of those kick and chase’s to end favourably for either team, which could have swayed the balance of the game either way. As it was Stuart’s Melville came out on top with a resolute second half performance and their refusal to drop their heads in the early stages meant that they ended as worthy winners.

Images – J. L. Preece. Images will appear here over the next few days.