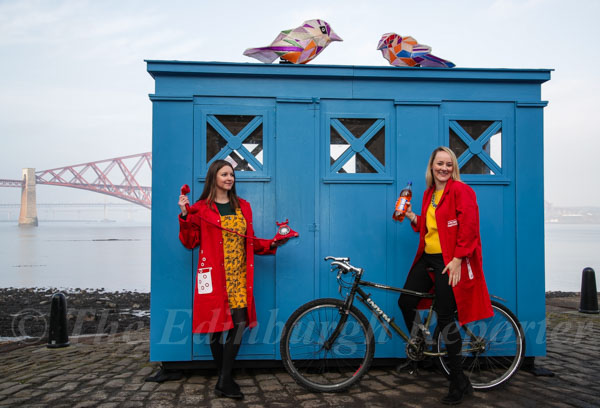 And the Time Lord himself might approve of some of the events on the agenda this year!

The bigger than ever before Edinburgh @EdSciFest is on from 1 to 16 April. #getconnected featuring Scottish inventions and police boxes! pic.twitter.com/GazTjbkgVG

At South Queensferry yesterday morning we encountered a police box in one of the most iconic sites around Edinburgh. There was the World Heritage Site The Forth Bridge helping to show off what you can expect at the Festival this year.

Moments in Time is one of the highlights which will feature four scaled up police boxes each with an individual theme : Enlightenment, Industrial Revolution, Information Age and 101 Scottish Inventions.

We all know that Scots are a nation of inventors and so there was the bicycle, Irn Bru, a telephone and a TV to show off some of the important inventions which began as an idea in Scotland.

The future has to be sustainable and the Festival will explore this theme.

Amanda Tyndall, the Science Festival’s Creative Director, talked us through the programme which invites you to Get Connected to science to one another and to the global community. She said: “This year The Edinburgh International Science Festival is inviting audiences from across Scotland and indeed from across the world to Get Connected to science to ideas and to each other as we explore the challenges and opportunities of living in the Information Age.

“Conflict, cultural divisions, demographic shifts and environmental degradation are not new, but what is new is the degree to which we are all connected – both in real time and virtually in a wired world – to these issues and to each other.”

With around 250 speakers and 270 events across 29 venues, this Science Festival promises to be the most spectacular ever! Alongside annual favourite venues National Museum of Scotland, City Art Centre, Summerhall, RZSS Edinburgh Zoo, Royal Botanic Garden Edinburgh and Dynamic Earth, the Festival expands into Edinburgh Centre for Carbon Innovation, the National Museum of Flight, Jupiter Artland, Edinburgh Gin Distillery and Surgeon’s Hall Museum among others, and takes a road trip to explore deep time at Siccar Point and tours of Torness Power Station.

The festival will be bigger than ever and will be staged across many venues such as the Traverse, The Royal Lyceum Theatre Edinburgh, Printmakers Gallery, Festival Theatre Edinburgh’s Studio, Bedlam Theatre, the National Museum of Scotland and Summerhall.

The Edinburgh International Science Festival also celebrates Edinburgh’s festivals’ 70th anniversary this year. In 1947, in Edinburgh, a unique idea was born; the Edinburgh festivals created a platform for culture to bring people together, to reimagine a better future and help heal the wounds of war. The city set about reclaiming its place as a beacon of Enlightenment – a global hub for creative, scientific and cultural excellence, promoting innovation and international exchange – and became the world’s leading festival city of which the Science Festival is proud to be a part.

Edinburgh International Science Festival embraces its serious side with talks and events covering a range of topics from the impact of Brexit on British science to protecting the pursuit of scientific truth in a post-truth world.

The Edinburgh Medal will be awarded to Professor Peter Piot who is Director of the London School of Hygiene and Tropical Medicine and a Professor of Global Health. He will give a speech addressing the challenges that infectious diseases pose for us and the lessons learned from recent outbreaks. He will join a line of prestigious winners of the award who have all made a significant contribution to the understanding and wellbeing of humanity. The festival this year will be supported by EDF Energy who will become the main sponsor of the festival itself and its education programme, Generation Science. There is a commitment from both organisations to invest in education in Science, Technology, Engineering and Maths (STEM).

“Science is at the heart of almost every issue and challenge the world faces in its future. It is vital that we engage young people in these issues and make the STEM subjects a primary consideration for their further education. To do this we need to make sure that we talk about science and engineering and present science in ways which are practical, mind-expanding and engaging. That is our ambition every year through the hundreds of sessions we offer and I hope that the curious and engaged of all ages will come and get involved in the Edinburgh International Science Festival this year.

“I would like to thank all those who make it possible to present the Edinburgh International Science Festival, Generation Science and Careers Hive on an annual basis: our headline sponsor EDF Energy along with The Scottish Government, City of Edinburgh Council, The Scottish Government’s Edinburgh Festivals Expo Fund, The Edina Trust, Baillie Gifford, The British Psychological Society, Cirrus Logic, Event Scotland, Heritage Lottery Fund, Kyowa Kirin, Siemens, Texas Instruments and Total.”