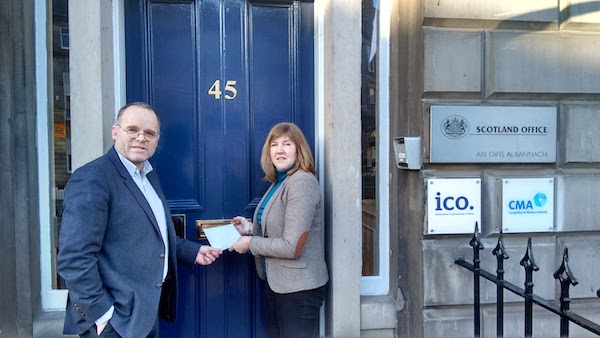 Alison Johnstone and Andy Wightman both Green MSPs for Lothian are lobbying the Scotland Office to keep the Green Investment Bank open.

Last week Green MP Caroline Lucas called on the UK Government to stop the sale to a private firm owing to fears of asset stripping and an abandonment of the bank’s main environmental purpose.

Alison and Andy have written to the Scotland Office in Edinburgh outlining their concerns, including the “long term record” of Macquarie, the firm considered to be the preferred bidder, of “slashing jobs”.

Andy Wightman who is a member of Holyrood’s Economy, Jobs and Fair Work committee,  said: “Reports of the Green Investment Bank being sold to the Australian investment bank, Macquarie have quite rightly prompted fears of strategic asset-stripping and profiteering. In 2005, the London Stock Exchange deemed Macquarie as an unsuitable owner for taking over companies due to the reputation the financial group had for the scale of its asset-stripping.

“There is a human element to this story which has not been touched upon. As a significant contributor to Edinburgh’s financial services sector, the sale of the Green Investment Bank could lead to the devastating loss of 55 jobs in this city. While Macquarie has a long term record of slashing jobs there are no guarantees that the Green Investment Bank will be saved from redundancies. If the Scotland Office won’t speak up for Scotland, then what is the point of having one?”

Alison Johnstone MSP, said: “With public interest in financial accountability at an all time high, it would be foolish for the Green Investment Bank to be purged of its successful ventures in financing key environmental projects throughout Scotland and the UK. As we begin the transition to a zero carbon economy, the fate of the Green Investment Bank, which is undoubtedly a key player in supporting this to happen, cannot be allowed to be held in the hands of irresponsible corporate profiteers who have already made investments in fracking and open cast coal mining throughout Asia, Australasia and Europe.

“The Scottish Green Party understands that for the Green Investment Bank to continue to grow on its successes, it needs assertive investors who are environmentally and economically shrewd. We need a bank which operates responsively and ethically to growing environmental pressures. That’s why we’re urging the UK government to pause proceedings in this sale and for the Scotland Office to support us with this call.”