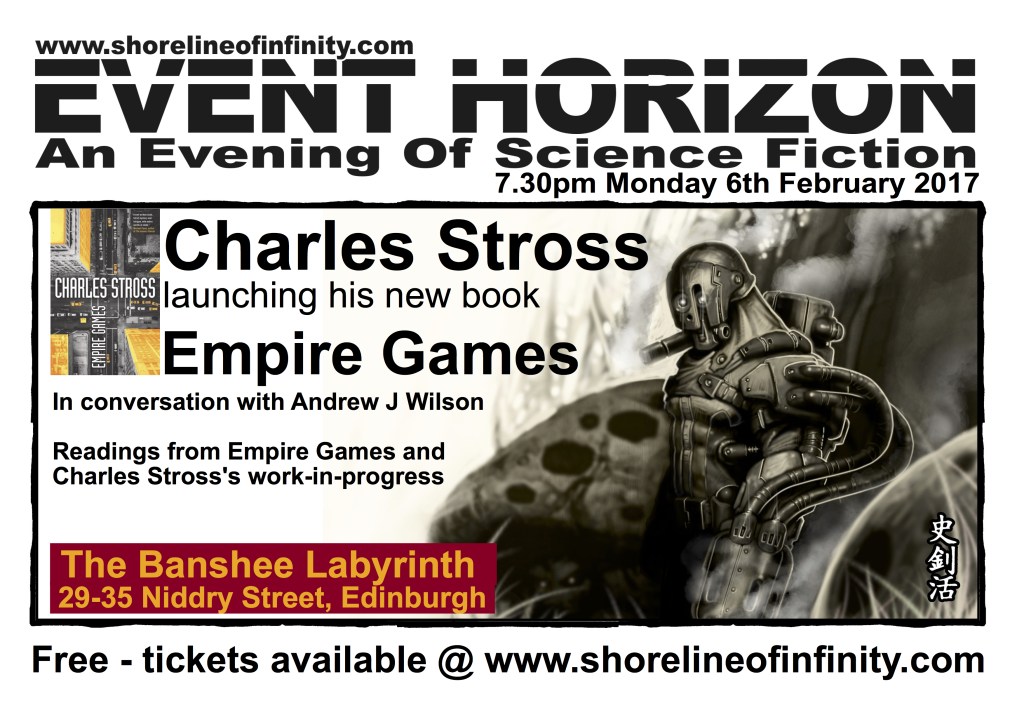 Event Horizon is Edinburgh’s monthly night of science fiction, brought to you by Shoreline of Infinity magazine (now in its 6th edition). For this February special, Charlie Stross will be in conversation with Andrew J Wilson; he’ll also read from Empire Games, from his works-in-progress and more! There will be a chance to talk with Charles and to buy signed copies of Empire Games.

Stross says; ‘Set in the same universe(s) about 17 years later, (Empire Games) takes the paratime intrigue into the near future.’ The Merchant Prince series involves a number of parallel worlds, all on the same geographical Earth but with different societies at different points of development. Stross calls it ‘An alternate-history series that comes on like high fantasy (a female investigative journalist from Boston discovers a locket that allows her to visit another time line where the eastern seaboard of North America is underdeveloped and occupied by a high mediaeval civilization) and goes out like a paranoid technothriller.’  The series also explores the concept of the ‘development trap’, and the issues involved in helping poor societies to ‘catch up’ but, as economist Paul Krugman has said, the books are ‘first and foremost, great fun.’

The evening will begin at 7.30pm on Monday 6th February at The Banshee Labyrinth, Niddry Street. Everyone is welcome and admission is free! Tickets are available from www.shorelineofinfinity.com