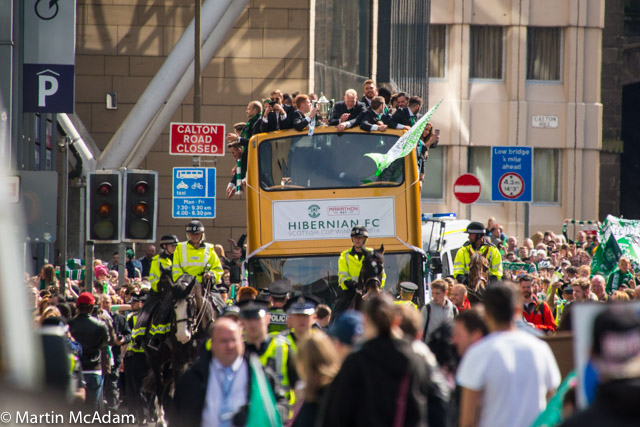 Many who saw him play believed that Gordon Smith was the best footballer ever to play the beautiful game whilst Lawrie ‘Last Minute’ Reilly won the hearts of the Easter Road and Scotland faithful with his prolific goal-scoring ability.

In the 1960s, the great Joe Baker was idolised from the terracings and unbelievably became the first player from outside the football league to be capped by England, and he did this whilst still a teenager.

Scotland manager Tommy Docherty always insisted that Pat Stanton was a better defender than England captain Bobby Moore and younger fans can’t believe that Hibs have ever had a better player than Franck Sauzee.

Peter Cormack, Davy Gibson, Bobby Johnstone, Eddie Turnbull, Willie Ormond, John Brownlie, George Best, Alex Cropley, Peter Marinello Russell Latapy and many more could arguably be added to that list however on the 21st May 2016, Lewis Stevenson achieved something that none of the others had been able to by becoming the only Hibernian player ever to win two major cup medals whilst still at the club.

Typically, after discovering this fact, the modest Fifer was quick to point out that many better players than him were much more deserving of hero status by their contribution to the club.

It is also testament to his character that his immediate reaction when the final whistle blew at Hampden Park that day was to seek out his opponents and shake their hand before joining in the celebrations with his team-mates.

Hibs’ longest serving player knows only too well the feeling of disappointment after losing at the national stadium and typically he wanted to show respect to the Rangers’ players who had given their all in one of the finest Scottish Cup finals in living memory.

Lewis of course won his CIS League Cup medal as a teenager in the 5-1 win over Kilmarnock in 2007 and was named ‘Man of the Match’ award whilst playing in midfield.

Since then he has played well over 300 games for the club and made the left back position his own, but has suffered mixed fortunes at the national stadium.

Lewis recalled that never to be forgotten weekend in May: “I only discovered after the game that I’d become the first Hibs players to win two major cup medals. It’s mad as there are many better players than me who have been at this club and not managed to get their hands on either of these cups and I am lucky enough to have picked up both. This season though my priority is to win the league and get promotion.

“I’d been to Hampden a few times before and to be honest that was the least confident I had been, just because I’d tasted failure before but there is always a part of me that wants to make amends for what happened and the players had a real hunger that day.

“We missed out on promotion but it would have been a travesty if we had come away with nothing so the Scottish cup was the crowning glory for everything that went on that season.

“Although you always want to keep positive, the stuffing got knocked out of us a bit when Andy Halliday scored to make it 2-1 to Rangers. We’d played well up to then and it was a bit of a sucker punch. You just have to keep fighting and that’s what we did that day.

“Two headers from Anthony Stokes and David Gray turned what could have been a bad day into the best day of my career.

“After the first one went in it was relief and I was thinking about getting it to extra time and consolidate and try and nick it from there.

“At 2-2 when we got the corner I stayed back on the half way line with Dylan (McGeouch) watching it from afar.

“When the ball hit the net, it was pure euphoria. I was the last one to get to the celebrations and by the time I got there everyone was jogging back to their position so it was an extra 100 meter run for me to get back.

“There was only a minute to go but it felt like an hour. When the ref gave the free kick on the half way line I thought it was for Rangers and I thought that they would pump it into the box but when I realised it was for us I was probably as delighted as I was when David (Gray)put the ball into the net.

“When the final whistle blew I shook a couple of Rangers’ players’ hands. I’ve been there before on the losing side and when the opposition team are running about daft it’s a horrible feeling so I made sure I paid respect to them, then I went mad. To see the joy on everyone’s face was fantastic.

“We had a party back at Easter Road but I was pretty calm that night as I wanted to soak up the atmosphere and remember as much as I could because I can’t remember too much of the celebrations after the League Cup win and I wanted to cherish this one.

“The following day I got the train back through from Fife and had stayed up from the night before. I met a few Hibs fans on London Road who wanted to share their experience of the day. Just to see what it meant to people was unbelievable.

“As I got to the top of Easter Road, a taxi stopped at the lights and a guy climbed out of the window as the doors were locked and he gave me a big cuddle. It was a great day and the fans were amazing, lining the route of the open topped bus.

“I just tried to sit back and take Sunday in. It doesn’t come around very often. It’s something that not many people will experience in their life, a parade like that but it is something I will remember forever. I’ve been through a lot of ups and downs during my time at the club, but I would have taken every down for the up we got winning the Scottish cup.

“It really does feel like a massive weight has been removed from our shoulders. Now we can look to this season and getting the club back into the top flight.”