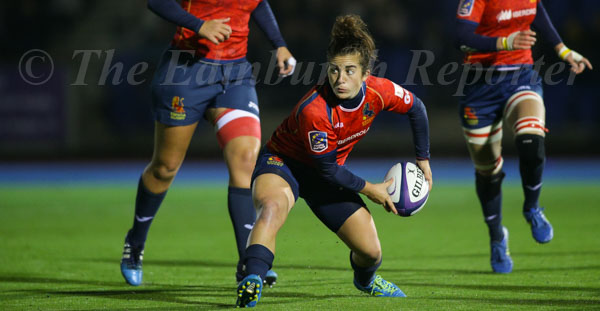 Scotland and Spain lined up at a chilly Scotstoun in Glasgow on Friday evening to play the first leg of a two-parter to decide which would go to Ireland for the 2017 Women’s Rugby World Cup.

With the pitch-side track beginning to freeze, and with several Edinburgh based players in the starting line-up, Scotland kicked off to get proceedings underway and then spent most of the first 10 minutes inside the Spanish 22. Good attacking play through both running and rucking had the defence scrambling at times, but both sides were guilty of giving away too many penalties.

Just before the 10 minutes, Spain made ground into the Scots’ 22 and dragged the game from one side of the pitch to the other, eventually winning a penalty in front of the posts which No. 10, Patricia Garcia, knocked over for a 3-0 lead.

After that, it was back to the opposition half for the home side. A penalty awarded just inside the 10 metre line gave the home fans a bit of hope, but Helen Nelson’s kick just slid past.

Still, things were on the up and, as the half hour mark approached, Scotland scored the first try of the match.

Again, play was concentrated deep inside the visitors’ 22 and a scrum on the five metre line set up the platform required. On the subject of the scrums, Spain were on top almost the whole time, pushing the Scottish pack all over the place. They didn’t win any balls against the head, but it did look ominous for the future. Anyway, with the ball won, the play first went right, then came back to the left where lock, Debra McCormack took full advantage of space on the wing to crash over in the corner for the five points. Hooker, Lana Skeldon, stepped up for the kick, but she couldn’t quite make the distance so 5-3 it remained. It was now Spain’s turn to get into the attacking mode and they progressed upfield through a succession of penalties and fine passing moves. Playing under advantage, the ball came back to the back line near the 22, and was quickly moved through the hands to the left side of the posts, ending up with centre, Vanesa Rial. She still had a player on her outside, but she stepped right and barrelled over for the try. Garcia scored the conversion and the score was 10-5 to Spain as the sides went into the break.

Spain,more or less, started the second half where they had left off, with pressure on the Scots’ line. A well organised defence, kept them out but many saw the writing on the wall.

Within this time, Spain managed to get the ball across the line twice, but on both occasions the ball was deemed to have been ‘held up’.

Scotland did manage a couple of forays, and got close to scoring through full back, Chloe Rollie, but as the clock neared the 70 minutes, Spain were once more stretching the home defence.

A well worked move across the front of the defence eventually drew in two defenders to the second last player in the line, leaving the winger free. However, the lobbed pass over was well forward and it was widely recognised that Scotland’s Get-out-of-Jail card had now been played!

As the match entered the final stretch, Scotland were beginning to get back into things and came close to scoring in the left corner, but Lisa Thomson was bundled into touch with a suspiciously high tackle.

The final couple of minutes of the match were all in the Spanish 22, but as full time ticked over, Spain won the ball and cleared over the stand to take the match 10-5.

Over 2,000 turned out on a bitterly cold Friday to see a match played with an intensity which would have graced any International fixture and, as things stand, Scotland have a more than even chance of making up the points gap in Leg 2 and securing that place in Ireland.