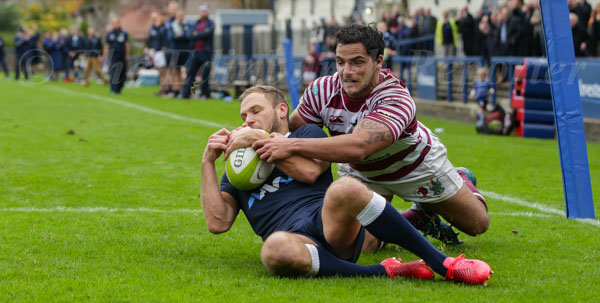 Unfortunately for Watsonians, Heriots scored nine of the twelve as they demolished the Myreside men 58-15 in Saturday’s BT Premiership match. Watsonians also suffered the loss to the stand of their Head Coach, Marcus di Rollo following a ‘comment’ to one of the assistant referees.

Watsonians started well enough and put the Heriots defence under a great deal of pressure in their 22, but could quite get over the line.

With just over five minutes played, Heriots turned the ball over from a ruck and a clearing kick from centre, Solomoni Junior Rasolea, was hunted down by wing, John Rae, and he sprinted clear to score the opener. With the kick missed, it was 5-0.

A few minutes later, Rae scored his and Heriots second in the opposite corner for 10-0.

As the crowd were settling back down, the home side were attacking again. ‘Sonians pushed them back a touch, but the inevitable was on the cards and this time, Russell Nimmo was the scorer, being piled over from a rolling maul in the left corner. 10, Alex Haggart, then missed his third kick of the day, so 15-0 it remained….

….Until the 26th minute, at least. Watsonians had enjoyed a period of possession, but unable to get clear of their own end of the pitch. Once Heriots had regained possession, they were on the offensive again and a powerful run from Nimmo had the ball inside the five-metre zone. A couple of quick rucks then saw Nimmo driven over for his second try. Another missed conversion by Haggart left the score at a, still impressive, 20-0 with just over 10 minutes of the half left.

It was a 10 minutes during which Heriots could have easily scored at least three or four tries, but had to settle for two.

The first came in the left corner as the backs outflanked the defence, puting No. 11, Harry Boisseau over in the corner, closely attended by the opposition hooker, Sean Crombie. A bit too close for the referee’s liking, earning Crombie a warning and closer inspection of images of the ‘try’ would suggest that the ball wasn’t grounded. Still, no TMO, so try it was. Haggart then scored his most difficult conversion attempt so far, so the score was now 27-0.

Watsonians were now all at sea and a sixth try a few minutes from time followed as flanker, Michael Maltman romped in from distance off the back of a line out, Haggart scoring his second conversion to take the score out to 34-0.

As the half drew to a close, the visitors had a brief moment of possession and used used it to good effect, sending No. 7, Angus Duckett over for their first points of the match and a 34-5 scoreline at half time.

The second half was much of the same, although Watsonians scored two tries to Heriots three, the game had been long over and Heriots marched on to that fine 58-15 victory at home against a side who had comprehensively beaten them a few weeks earlier at Myreside.