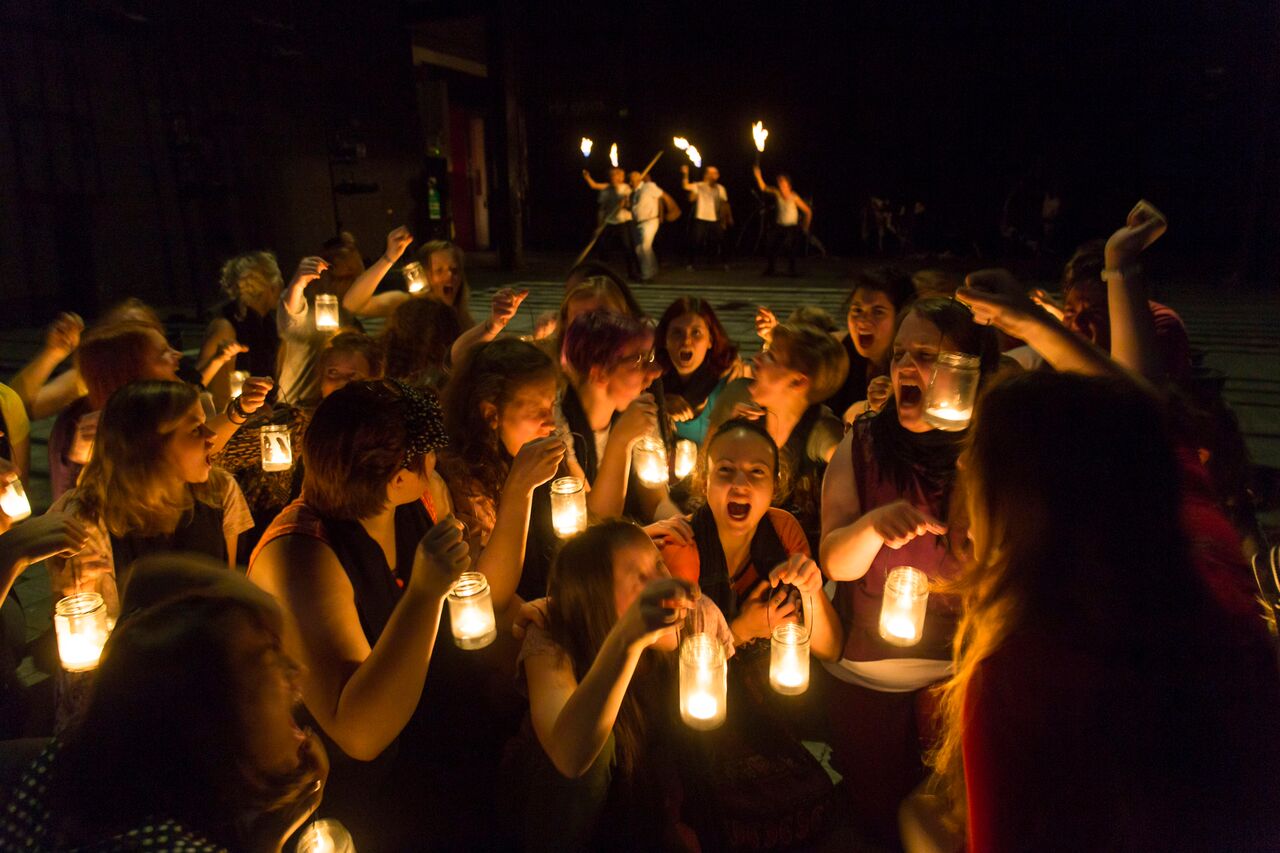 Urban, street-wise, shouting from its relocation to the Athens of the North, David Greig’s reinterpretation of Aeschylus’ earliest known extant script is primal, vibrant and packs a viscerally modern punch. Evocative publicity posters and the programme cover depict a lone refugee waving a ragged life-jacket, a potent contemporary image indelibly fused in our consciences. Apposite, startling in its contemporary relevance, The Suppliant Women’s message is as timeless as is it disturbing. Its feral and dangerous volatility shrieks with indignation and brutalised vulnerability.

The young women under the protection of Danaus (Omar Ebrahim) their totemic, paternal guardian, flee from Egypt to escape forced marriages to their cousins. They seek asylum and protection from Pelasgus, King of Argos (Oscar Batterham) with whom they claim ancestral ties that the Goddess Io and even Zeus must recognise. They will choose suicide rather that submit. After seeking the agreement of his people, Pelasgus rejects the Egyptian herald’s petition for the Danaides’ return and offers them sanctuary within the city walls. He has put honour, duty and the radical concept of fledgling Democracy before and above hostile, alien Gods and culture. The play is the first of a trilogy, the other two are lost. The Lyceum stage is utilitarian; stripped raw to its core, volumous, potent, anticipating. Choreographer, Sasha Milavic Davies, exploits this with both compressed, suggestive military formations and serpentine fluidity as the ‘Edinburgh Community Chorus’ of Suppliant Women led by their principal spokeswoman, the Amazonian confident Gemma May, writhe and agitate delivering their battalion precise verses of supplication and defiance. At times a ghostly suggestion of Diaghivev’s riot-provoking interpretation of The Rite Of Spring haunts the prowling, menaced Chorus.

Composer, Musical Director, John Brown’s intuitive and supremely sparse use of percussion (Ben Burton) and performance defining dual-accompanied Aulos pipers (Callum Armstrong/Barnaby Brown) weave themselves within the rich tapestry of this performance with delirious insistently. King Pelasgus must juggle the fate of his febrile subjects against the determined will of the cock-sure swaggering intimidation of the Egyptian Heralds. His is a life or death decision of impossible diplomacy. Parallels, analogies and potent symbolisms abound within this maelstrom of human dynamic. The plight of brutalised and exploited refugees, the flotsam and jetsam of sectarian, religious and proxy super-state conflicts is most prominent. The spectre of the speciously referred to ‘honour killings’, the recent data that reveals the scale of mental health issues amongst many younger women in the UK are subtexts that clammer to be heard. But Director, Ramin Gray, lets the poetry speak across the millennia. As Danaus beseeches his young cohorts, ‘We are foreign, we cannot hide that, people will judge that,’ what Aeschylus would make of Brexit sloganeering can only make us shudder. Might Danaus speak for us all when he asks the Suppliant Women – ‘Let us see if we find ourselves reflected in this strange and ancient mirror?’ Outstanding performances, emblazoned with a critical mass of supreme assurance. Miss at your peril.