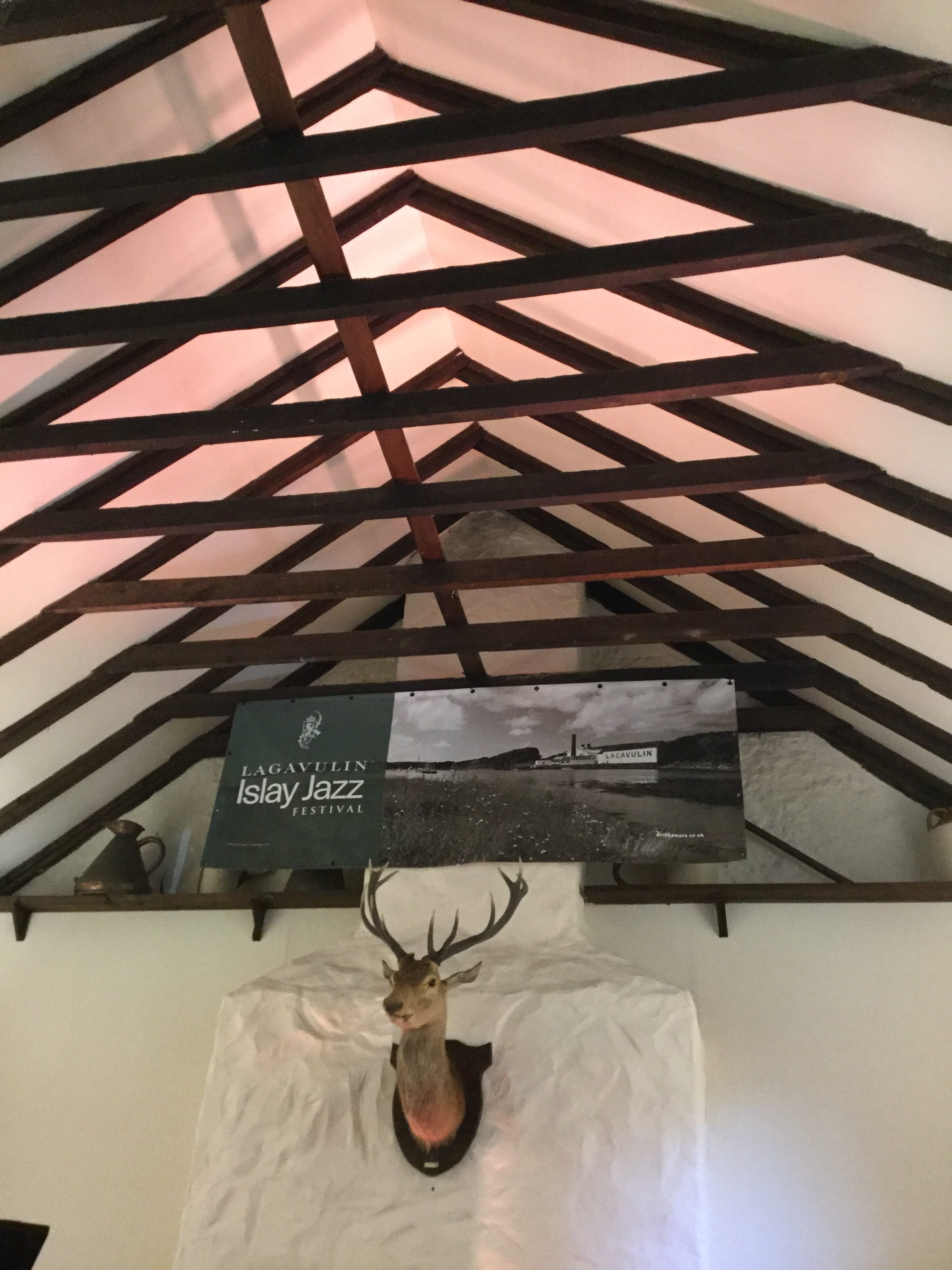 ‘Two of these musicians are Jazz Festival virgins…’

And they aren’t the only ones…  I had never even been to Islay, the southernmost island of the Inner Hebrides, never mind its annual whisky-fuelled festival. And now here I am, on a boat leaving Kennacraig, Calmac’s terminal on the Argyll peninsula, in pouring rain and 40mph gales. Does the Captain really think this is a good idea? Do I? (No…)

The Lagavulin Islay Jazz Festival is something of an institution. It’s been going for 17 years – which is 183 years fewer than its sponsor, one of the eight distilleries on this tiny island. Unlike Glastonbury or T in the Park, there is no central venue – musicians perform in village halls, community centres and even an RSPB centre. Fresh off the ferry (yes, I survived…) the first concert we attend is held at Ionad Chaluim Chille Ìle, a Gaelic medium college surrounded on three sides by water. Listening to Fraser Fifield’s ethereal piping and Graeme Stephen’s beautiful guitar as the sun sets over Loch Indaal is a magical experience. I’m beginning to think even I can last three days without city comforts.

The weekend attracts some of Scotland’s finest jazz musicians, but there’s still space for the locals; Fifield and Stephen are preceded by a short but enjoyable set from Brian Palmer’s Islay Jazz Quartet, who are greeted with just as much enthusiasm as the well kent names.

It doesn’t take long to realise that this festival really is a party. Everyone is extremely friendly, you see the same faces at every session, and although many people have been coming along for years there is little sense of cliqueness – you’re soon exchanging greetings with folk you’ve only known for a few hours. The free drams offered at every venue could have something to do with this… Our second concert (there are 18 to choose from) is held at Lagavulin itself, a picturesque distillery housed in stunning white buildings. You could almost think you were in a Mediterranean village. Almost. Haftor Medbøe (guitar), Espen Eriksen (piano) and Gunnar Halle (trumpet) – how Norwegian do these guys sound? Well very, in the case of Espen and Gunnar. Haftor, an associate professor at Napier University, actually left Norway when he was 7 and sounds more Bruntsfield than Bergen. The three of them form an impressive trio; not only do they play great music, they do so with tremendous style and humour – and this is a recurring theme of the festival. Everyone, musicians and audience, is here to have a good time – there is no posing or tantrum-throwing, even when equipment falls apart or a baby decides to join in. It’s all tremendously relaxing. Although we’re here for the jazz, Islay has plenty more to offer the visitor. St Columba visited the island around 720 AD, but it’s thought that fishermen and hunters lived here as far back as 7,500 BC. Archaeological remains abound, and there are many carved stones and Celtic crosses. At Kildaton you can see the last unbroken ringed Celtic cross in Scotland. You can also visit a particularly ileach café – a bench, a picnic hamper and an honesty box. You may struggle to get dinner after 8pm in the Hebrides, but where else can you eat home-made cake on a hillside where people worshipped almost one thousand years ago? You could have just stayed in Edinburgh and seen the Ryan Quigley Quintet at the iconic Jazz Bar – they were, after all, playing there just 24 hours after their stint in Islay. I’m sure they were fantastic in Chambers Street – but I’m pretty sure they were even better in the Bruichladdich Hall (and I didn’t even partake of the free Lagavulin). Being the festival virgin that I am, I’ve never even heard of Quigley, a Derry-born Glaswegian and major jazz scene player. The Quintet’s launch of a new CD What Doesn’t Kill You… at London’s Pizza Express Jazz Club just five days before the Islay gig was, according to none other than John Fordham (The Guardian) ‘live jazz playing at its best’. Their performance in this little distillery village is better than best – it’s nothing short of sensational. Quigley may be nominally in charge of these people, but each one is a fabulous player in his own right – and it’s clear that Quigley knows that (he even flew them all to Islay while driving the van up from London himself – ‘I’ve had two hours sleep and my girlfriend may no longer be my girlfriend’). The rapport between these musicians is unmistakable, as is their respect for each other’s playing. Saxophonist Paul Booth, pianist Geoff Keeezer and drummer Clarence Penn all produce stunning solos, while phenomenal bass player Michael Janisch does all that and more with hugely entertaining style. Quigley’s trumpet breaks are quite simply breathtaking. Apparently what the quintet does is called hard bop. I don’t care what you call it, it’s glorious. You come away from such a performance feeling not only that you have experienced great music, but also that you have been let in on a particularly friendly club – not so much a ‘giant house party’ as an intimate, highly-charged and exhilarating adventure.

Islay is also famous for its wildlife – and here I must admit defeat.

I come hoping to see eagles, or at least a few harrier hens. I bring the binoculars and even manage to focus them. I look for bottle-nosed dolphins, seals and otters; I look in vain. Does a chough grace my walk? It does not. Islay has two RSPB reserves; we set off by ourselves on a brisk walk across one, the Oa (pronounced O – do they have a surplus of ‘a’s in Gaelic?), leaving the car park in such sunshine that I almost don’t take a coat.

By the time we make it to the headland we’re being battered by wind and soaked by horizontal rain. It’s said that the American soldiers who built the impressive memorial to their compatriots, who died in two ships lost off this very point (one, the Tuscania, torpedoed, the other, HMS Otranto, sunk after a collision with another vessel) found conditions on this lonely cliffside even worse than those they’d endured in the trenches. We see a few intrepid mountain goats. It soon becomes clear that everyone’s seen them – in fact they’re the local show-offs.

Undaunted, we try another walk, this time with Dave, warden of the other RSPB reserve, Loch Gruinart. Loch Gruinart is much more sheltered than the Oa; rowan trees, fuchsias and wildflowers line the path to the observation point, the sun is dutifully shining. Dave tells us lots of interesting stuff about the RSPB’s land management. Can he show us a bird? Reader, he cannot. ‘It’s not the best time for them’ he admits – and right enough, the book I consult afterwards advises that late spring is the season for successful Islay birdwatching. Never mind, we have a great walk, and Dave is an excellent guide – one who knows his stuff, but doesn’t make you feel like a total ignoramus (some achievement when it’s me he’s talking to…).

We may not see any birds at Loch Gruinart, but we do see some excellent jazz. A lunchtime session in the RSPB centre offers us three young Scottish jazz stars, Tom Gibbs (piano), Brodie Jarvie (bass) and Stephen Henderson (drums). It’s the first time that they have played together as a trio, which comes over at times – but never during the music, where once again the empathy between them shines through and makes for a most enjoyable hour (interspersed with a fine fundraising lunch from the RSPB volunteers). Henderson in particular deserves a mention for his outstanding (and very unassuming) playing. And so, as the weather deteriorates, we come to the closing concert of the 2016 festival. We have seen trumpeter Colin Steele and saxophonist Martin Kershaw in Aberdeen, we have seen them in Edinburgh – but we have never seen them perform as well as they did in the Bruichladdich Hall. On stage with Brian Shiels (bass), Alyn Cosker (drums) and Paul Harrison (piano) they form Steele’s supergroup, Mercy Mercy Mercy, playing a set of Cannonball & Nat Adderley tunes.  Assured playing from musicians at the top of their game always makes for a great evening, but these five have so much more – their solos are electrifying, their humour infectious, their enthusiasm thrilling.  Kershaw may personify Mr Cool while Steele gyrates all over the place, but few performers have such brilliant rapport – and it’s a rapport they freely share with the audience, thanking us for turning up, thanking Lagavulin for its continuing sponsorship, thanking Jazz Scotland and Islay Arts for doing all the leg work, then coming down to chat with anyone and everyone after the show. A spectacular and triumphant ending to a magnificent festival.

Was it worth travelling 200 miles for? We’re already planning next year’s visit. If you’d like to hear top class music in a unique setting, you should too.