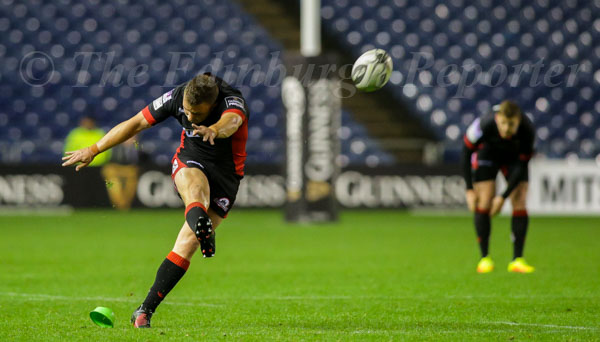 Edinburgh take the points from a soggy BT Murrayfield . Llanelli Scarlets were the first visiting side to BT Murrayfield in this year’s Guinness PRO12 League and, with both teams looking for that opening win, the match had all the ingredients necessary for a well fought encounter. All the ingredients, that is, apart from either team’s ability to really get things going on the pitch. And suitable conditions…….

An early penalty opportunity for Rhys Patchell struck the upright and skimmed across the front of the pots, but it was another penalty in the 13th minute which put the Scarlets 3-0 ahead.

Five minutes later, new boy – and Man-of-the-Match – Duncan Weir levelled from the tee before puting the home side in the lead with a second successful strike in the 26th minute. In between, Edinburgh had gradually started to gain the upper hand and Weir’s second penalty came from an infringement as the home side attacked the Llanelli try line.

However, as is the way of these things, Patchell struck back a couple of minutes later to draw the visitors level at 6-6.

With the ball and playing surface getting a bit slippery with the constant rain, the kicking game came out of the box and it was Weir who took first blood. His kick over the defence saw full back, Liam Williams, scramble for the ball in the face of pressure from Edinburgh wing, Michael Allen. Williams’ slip saw the ball skip over the line and Allen beat the No. 15 to the ball for the try. Weir then scored the touch line conversion attempt in the tricky conditions and took the score out to 13-6.

The Scarlets immediately fought back and set up camp deep in the home 22, but the attempts on the line came to naught as a penalty infringement at an under-the-posts ruck gave Weir the chance to clear. With Edinburgh now on the front foot again, it took a few minutes to get back down to the Scarlets’ end of the pitch. With Jake Ball in the sin bin, an attempted clearance came under pressure from Phil Burleigh and the ball was sent scurrying across field into the grateful arms of Marcus Bradbury who had a clear run in to dive behind the posts for the second try. Weir scored his fourth kick of the night and the referee blew up for half time with the home side ahead 20-6.

Edinburgh spent 20 minutes at the beginning of the second half with 14 men as two consecutive yellows reduced their on-field numbers. The first was the result of a fairly severe tip-tackle by Bradbury then, just as he was allowed back out to play, Burleigh handled in a ruck and was sent to the bin while the seat was still warm.

Patchell took the opportunity from the second of these to kick his third penalty to bring the score to 20-9 on 53 minutes.

And that was about that, really…. Edinburgh tended to dominate the territorial game, but, apart from Weir missing a penalty, the only scoring chance came with a couple of minutes left. Scarlets blasted up to the Edinburgh 22 and set about trying to score. Which they nearly did but Allen held the struggling Steff Evans off the ground while he was hanging over the line and the ball was lost to touch. The TMO decision, however, was a penalty for a high tackle, but the Scarlet’s pack couldn’t convert from the line out and maul, the ball adjudged to be ‘held up’ in the pile of bodies over the line. Edinburgh then won the scrum and Nathan Fowles booted the ball into the stand to, thankfully, bring the match to a close.