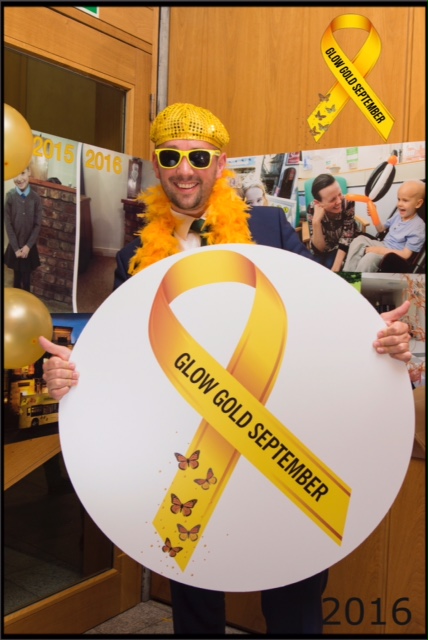 We reported to you in our summer print edition about the Glow Gold campaign which would light up some of our important buildings in September.

Ben Macpherson MSP tells us he was proud to welcome the Glow Gold September campaign to the Scottish Parliament and support them in their mission to get the world “Glowing Gold” to change the face of childhood cancer. The Edinburgh Northern and Leith MSP met with a group of parents and grandparents from the Glow Gold September campaign to find out how everyone in Edinburgh can “glow gold” and do their bit to raise the profile of childhood cancer and help raise awareness of the early warning signs and symptoms.

The campaign has had an incredible impact in Scotland and globally. It has seen more than 200 famous landmarks and buildings sign up to light their façades in gold, including Edinburgh Castle, the National Galleries and St Andrew’s House.

“I am proud to be supporting the Glow Gold campaign to raise awareness of the symptoms and signs of childhood cancer and I hope that everyone in the area will join me in Glowing Gold this September.

“The support that Glow Gold has gathered is incredible and I will do all I can to help support this important campaign in Edinburgh, and across Scotland.

““Our aim at Glow Gold has been to ensure the colour gold becomes synonymous with childhood cancer and our awareness month September. We have been asking iconic buildings and landmarks to illuminate gold. And have been asking charities to work together to raise the profile of childhood cancer and improve awareness. And have been using the interest generated to disseminate the information on the early warning signs and symptoms through the be child cancer aware and headsmart awareness cards”

“11 children and young adults are diagnosed with cancer in the UK daily, a quarter wont survive and the vast majority will be left with some form of long term disability as a result of their cancer or its treatment. Knowledge is power, and we wish to empower parents with the knowledge required to pick up the signs and symptoms early. We are proud to have over 200 buildings that have illuminated this month to raise awareness and we will be aiming to build on this in the coming years.”