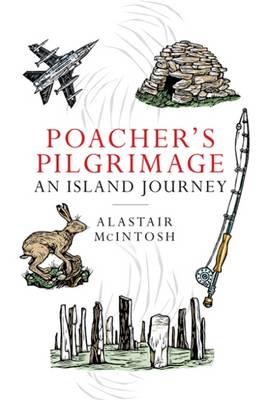 From the Spanish Civil War to the Summer Walkers of the North-west Highlands, the Edinburgh Book Fringe will offer daily authors’ talks, readings and discussions this August at Word Power Books. Robert Crawford, Ruth Thomas and Meaghan Delahunt open the Book Fringe with the launch of The Book of Iona: An Anthology, in which – as on the island itself – the sacred and the secular rub shoulders. Here is where a medieval Gaelic-speaking monk encounters Seamus Heaney, and Robert Louis Stevenson sails past Queen Victoria. Find out how novelists, poets, saints and sinners over the centuries have written about one of the world’s most famous and best loved islands; the book includes many new, specially commissioned, Iona stories and poems from writers including Meg Bateman, Jennie Erdal, Meaghan Delahunt, Candia McWilliam, Ruth Thomas and Alice Thompson, plus a treasure trove of earlier material. More islands feature in Alastair McIntosh’s Poachers’ Pilgrimage: An Island Journey. Over a twelve-day pilgrimage, often in appalling conditions, Alastair returns to the Outer Hebrides of his childhood and explores the meaning of these places. This book is a walk through space and time, from the most southerly tip of Harris to the northerly Butt of Lewis, across a physical landscape and into a spiritual one. As he battles with his own ability to endure some of the toughest terrain in Britain, Alastair meets with the healing power of the land and its communities. ‘This is a moving book, a powerful reflection not simply of this extraordinary place and its people met along the way, but of imaginative hope for humankind.’ Still in the north, Timothy Neat looks at the Travelling People – the itinerant tinsmiths, horse-dealers, hawkers and pearl-fishers who made their living ‘on the road’ – The Summer Walkers. These indigenous Gaelic speaking Highlanders are heirs to a vital and ancient culture; Neat’s book documents their way of life and explores their customs, superstitions, unique language, stories, poetry and songs through photographs and remembrances. Looking beyond Scotland, Ben Enrenreich discusses The Way to the Spring: Life and Death in Palestine. A book about Palestine today, ‘It is neither apologetic nor romanticized, but a powerful and brilliantly realized scream of a book, scorching and tender, from a journalist whose anger and empathy burn through every word… Blending political and historical context with the personal stories of the people Ehrenreich meets, The Way to the Spring is a testimony, a provocation and a vital document.’ Rosa of the Wild Grass, the Story of a Nicaraguan Family spans the last fifty years of the life of this small Central American republic. Fiona M Macintosh introduces her new book, which Noam Chomsky has called ‘A poignant, gripping, sensitive tale.’ Meanwhile Serpent’s Tail founder Pete Ayrton will launch No Pasaran: Writings from the Spanish Civil War, bringing together hauntingly vivid stories from a bitterly fought conflict. ‘This is powerful writing that allows the reader to witness life behind and at the front lines of both sides.’

One of the many highlights of the fortnight will be Amy Liptrot’s reading from her celebrated memoir The Outrun, ‘a wonderfully evocative account….blending searing memoir with sublime nature writing, and coming up with a unique piece of prose that amounts to a stirring personal philosophy of how to live’ (The Independent). Amy will appear with PK Lynch, whose Armadillos Jeanette Winterson has described as ‘a book about journeys that have to be made with outcomes that can’t be predicted. PK Lynch can tell a story deep as a wound. A new writer unafraid of the pain scars and not scared by beauty either.’

Author James Robertson needs no introduction – the prolific, Booker-nominated (The Testament of Gideon Mack) author and publisher will discuss his latest novel To Be Continued…. in which a man makes friends with a talking toad; ‘In this gloriously surreal romp, James Robertson proves once and for all that the important things in life – friendship, romance, a very fine malt whisky – come when you least expect them.’

A Word Power event wouldn’t be complete without some home-grown politics. High rents are a major issue in Edinburgh as in many other cities; in The Rent Trap: How We Fell into it and How We Get Out of it (co-authored with Rosie Walker) journalist Samir Jeraj looks at what is really going on in the private rented sector and exposes the powers which are conspiring to oppose regulation. A quarter of British MPs are landlords, rent strike is almost impossible and snap evictions are growing, but in the light of these hurdles The Rent Trap will show how people are starting to fight back.

Finally, if you like a little technology with your literature, don’t miss Helen Sedgwick (The Comet Seekers), Viccy Adams (There and Now, Recollections: 12 vignettes from Lashihai) and Jane Alexander (The Last Treasure Hunt) discussing The Science that Inspires. What is the impact of virtual realities? And what happens when a world resets itself backwards in time without warning, leaving an astronaut stranded in more ways than one?

The Edinburgh Book Fringe will take place from Saturday 13 August to Saturday 27 August 2016 at Word Power Books, 43-45 West Nicolson Street. For more information please contact the shop. All events begin at 1pm and all are free and unticketed. Everyone welcome – donations also very welcome!

‘When you find Word Power, it’s like sighting a fox or a sparrowhawk in the city. You think, yesss!’ (Kathleen Jamie).