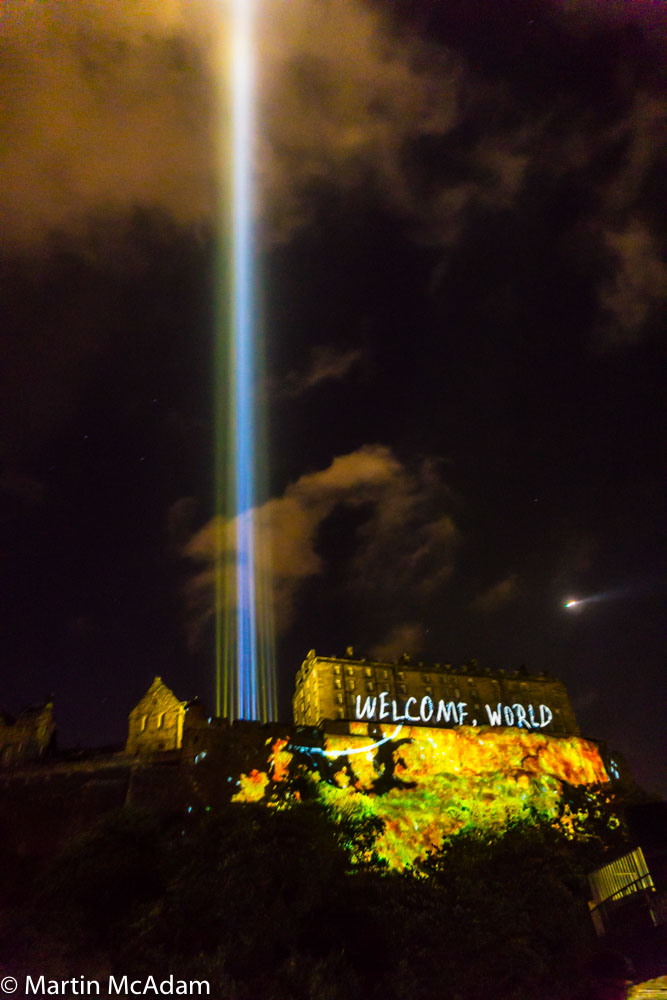 The opening event of the Edinburgh International Festival took place last night, with 59 Productions using the west face of Edinburgh Castle and Castle rock as a huge canvas of 7000 square metres for digital projections.

Thirty thousand people gathered on Castle Terrace in an orderly crowd who remained attentively quiet throughout the event.

The imagery depicted 350 million years of Edinburgh history in 18 minutes, and we think that the whole show was a spectacle. It was nice to see the western facade of the Castle being used for a change!

With 42 projectors and 15 km of cabling this was a magnus opus and we look forward to the next 59 Productions event!

There was a huge drone circling the castle last night during the light show and we will be interested to see the footage from that height. Meantime have you seen this video from Airborne Lens? What a fab city we live in! Do you own a hotel or guest house in the capital? If so would you like us to deliver some copies of our newspaper for your guests?

The time is now as the paper includes some handy suggestions for the Fringe!

Just let us know your name and address with details of how many copies you would like. editor@theedinburghreporter.co.uk With the Edinburgh Festival Fringe underway for 2016, we are always looking for the most unusual and different shows.  Picture House Pop Up have announced the first outdoor screening of one of Scotland’s most epic films BRAVEHEART, on Thursday 25th August at the Ross Bandstand.

This is certainly an innovative use of the bandstand which is scheduled for complete demolition and redevelopment if plans go ahead. Another show which is perhaps a little heavy on content but which will also have a lot of meaning is Iraq Out & Loud which begins later today near Bristo Square. There is only room for four people in the Blundabus, but you can actually take part if you wish.

The idea is that the entire content of the Chilcot Report, all 2.6 million words of it, will be read out by anyone who wishes to take part. All available slots have been booked for today, but there are plenty left. The producer estimates that it may take two weeks of continuous reading for the entire report to be vocalised.

The 12 volumes of the report took seven years to complete and were published earlier this summer.

There were two questions before the inquiry:

the questions for the Inquiry were:

In a statement which was damning of the government of the day led by Prime Minister Tony Blair, the Inquiry was led by Sir John Chilcot who said: “We have concluded that the UK chose to join the invasion of Iraq before the peaceful options for disarmament had been exhausted. Military action at that time was not a last resort.”