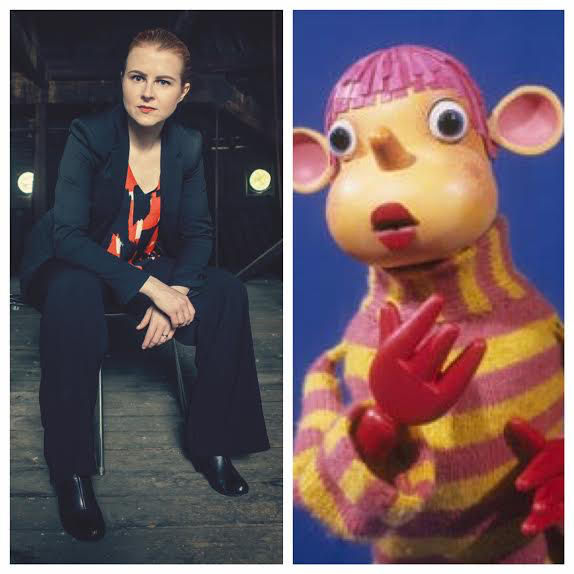 Director and Offie Award finalist Robert
Shaw is bringing the play Poena 5X1 (Or How I Came To Agree With Right Wing Thinking) to
this year’s Fringe. Starring Cathy Conneff (above, with Pob – all will become
clear!), Poena 5X1 is a provocative Scandi noir thriller incorporating sex,
politics and the power of love.

Robert took some time to talk to The Edinburgh
Reporter about the play.

1.
Poena 5X1 deals with crime and punishment in a political context. In a
British context, there have been four Justice Secretaries during the past five
years, each claiming a somewhat different philosophy. How does this hot potato
nature reflect the themes of your production?

That’s a very interesting question.  There’s an age-old conflict here:
rehabilitation vs punishment, compassion vs deterrence, humanity vs
retribution.  Love vs justice, to say it
straight out.  In our play, Bryony the
lead character is a scientist who’s developed a drug which she calls ”a humane
punishment”, “a hell that is liberal”.  I
guess we’re asking: is that possible or is it a contradiction in terms?  Will there always be a conflict between love
and justice or can the two ideas be combined in one ideal and amazing process,
which is what Bryony in our play believes she’s done?  And if that can be achieved, is it inevitable
that someone will ruin it by trying to monetise it?  In our neoliberal world where the market is
supreme and profit is everything, do liberal ideals inevitably contain within
them the seeds of their own destruction?
You mentioned the last four Justice Secretaries: they’re all Tories of
course.  Grayling, for example, was more
hardline than Clarke before him, but the differences were relatively
trivial.  The Tory Party is renowned for
its tough stance on law and order and it will always be that way.  So it’s hard to see any of them taking
seriously the idea of treating offenders humanely or with compassion and
love.  I guess the closest to it was
Clarke, who at least put an emphasis on rehabilitation and a reduction of
sentence in exchange for a guilty plea, although that got him into trouble with
his right-wingers and he was replaced.
Grayling was widely criticised for banning books in prisons, which says
everything about him.  He also changed
the rehabilitation process by appointing private companies to look after
offenders on licence in the community.
This reflects another key theme of our play: “Profit always simplifies
things: it appeals to the simple”.
What happens when you introduce the free market into the justice
system?  Is it in any way appropriate or
respectable to try and make a profit out of offending and rehabilitation?  If you believe, as I do, that rehabilitation,
compassion and humanity are alien to the rules of the market, does making a
profit always mean weighting the system on the side of punishment and
retribution?

2.
The subtitle of the play is How I Came to Agree With Right Wing
Thinking. What do you think, say, former Justice Secretary Michael Gove would
make of the production? And what would you want someone like current Justice
Secretary Liz Truss to take away from it?

Since the Tory leadership election, I’m
afraid I’m finding it harder and harder to take Gove seriously.  I suppose he’d probably think the play was
about him; I’m pleased to say it isn’t.
By the way, have you noticed how closely he resembles the 1980s Channel
4 children’s TV character Pob?

Liz Truss is an unknown quantity to me as
Justice Secretary.  I’d like her to
reflect on the dilemma I outlined in my previous answer.  How should the prison system balance
compassion, humanity and rehabilitation with deterrence, punishment and
retribution?  How much love and how much
justice?  Should the free market be
allowed to influence or distort that process or should profit and justice be
kept as far apart as possible?

3.
Poena 5X1 has been described as a Scandi noir thriller. How does the
production go about establishing the sort of mood that description would
suggest?

I’m tempted to say come and find out!  I think in part it’s to do with the story and
the way it’s told by the single character, Bryony Adams.  She starts out as an idealist whose ideals
are profoundly challenged as the play goes on.
Huge props to Abbie Spallen for writing such an engaging and developed
character.  We’re also really blessed to
have a specially composed soundscape from one of the world’s leading composers,
Tarik O’Regan.  Every element has a key
role to play in building the mood.  I
also want to pay special tribute to our brilliant performer, Cathy Conneff.

4.
Poena X51 explores sex, politics, and the power of love. How do you go
about balancing those three themes for a Fringe audience?

This is really down to the skill of our
writer, Abbie Spallen.  She has created a
character I think we can all relate to, Bryony Adams.  Bryony is put in an impossible situation,
within a dystopian world of the not too distant future.  How does she react as she sees everything
she’s believed in and worked for suddenly exposed as a hollow promise?  In staging the play, we’re focused on
creating the character and telling the story.
The themes have been developed by the writer, so we hope they’ll come
through by themselves, with or without our help.

5.
The play ends with a terrifying twist. Without giving too much away,
what would you hope audiences will be talking about as they leave their seats?

I hope they’ll be talking about the
extraordinary performance by Cathy Conneff, the brilliant play by Abbie Spallen
and the amazing music by Tarik O’Regan.
I’m not going to give away the ending, but I really I hope and believe
that the dilemma I’ve referred to, which is essentially the eternal conflict
between love and justice, will be uppermost in the audience’s mind in a very
immediate, personal and perhaps shocking way.