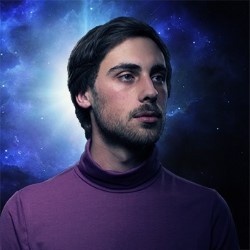 Armed with a cast that despises him and a slim budget, actor, writer, and director George Vere endeavours to bring you his debut sci-fi masterpiece. An intergalactic comedy farce from Willis & Vere.

I have to start this review with a confession; I don’t like musicals. Well, that’s not strictly true, I like Oliver!, well at least when Ollie Reed and Ron Moody are on screen.  I can live without the rest of it. Given that, when I sat down and saw in the programme, “Lyrics by George Vere,” I was worried.  I shouldn’t have though as with George Vere, who is also The Starship Osiris‘ writer, director, producer and lead actor, I was in safe hands.

The Fringe brochure doesn’t warn you that this is a musical but that shouldn’t worry you.  This is a fun show that laughs both at attending the Fringe and the show’s subject matter, the captain and crew of a spaceship who are out there saving the Universe on a regular basis. Based in part on Kirk and co – The Original Series version with the Shat, not Chris Pine, in charge – the writing shows how much affection Willis & Vere have for their source.  I don’t know if George Vere is a geek but he knows the beats and style of 42 minute long science fiction/space televsion drama and uses it well.

The show is about Captain Harrison, an unorthodox, hard drinking, womanising spaceship captain who’s out there doing what nobody else can.  The Captain is ably assisted by his Starettes Lexie, Roxie and Trixie, plus SCOT the ship computer and Ian, as well as lumbered with Evans, a love sick ship’s engineer.  The Captain is defending the Universe for us, with a whiskey in hand while he fights, woos and quips.  All the while Harrison’s hoping to find a way to bring his wife, the love of his life, back to life after mourning her for seven long space-years.

Don’t worry if you are not a skiffy fan or a Trekker, the show will make you laugh regardless.  There are moments that will appeal to my fellow geeks, such as the first time Vere sits in the centre seat, legs akimbo with his left hand on one knee and his right forearm on the other. In that move you know the actor has thought about how to play the part and is inspireed by his muse.  However, the show’s not all about the space drama but also the daily, grinding pain of performing and living in Edinburgh during August.  The cast show they have earned their stripes during the city’s Three Weeks.  I would say more but don’t want to spoil your fun.

Of course, this being the Fringe, there is the dreaded audience participation.  However, there’s no need to fear as there’s not too much of it and everybody I saw the show with joined in with the spirit.  I even sang along with some of the songs, high praise indeed.

If you’re looking for an early afternoon show that’s fun, in the spirit of the Fringe but not in a po-faced earnest way and will leave you with a smile on your face after an hour, then you should board The Starship Osiris.  You will live long and chortle if you do.

Oh and in case you can’t see what’s happening, Captain Harrison is fighting the robot.