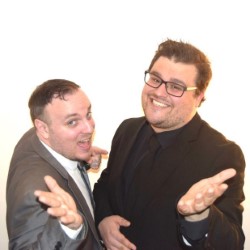 Even at their peak, stand-up comedy duo Ronnie and Jonny were mediocre at best. But at least they were friends. When they had a dramatic falling out that led to a parting of ways five years ago, Jonny managed to make his way among Z-list celebrities while Ronnie became something of a recluse. Now they’ve been offered a chance to reunite for a high profile one-off gig – but can they shake off the past and work together again? Set in a pub in real time, the pair reunite and attempt to dissect where they went wrong, while reminiscing on some of their golden moments from yesteryear. The plot twists and turns as more about what really happened in the past is revealed, and blame shifts from one to the other until the truth eventually comes out.

Rather than being a traditional “theatre” piece, experiencing Ronnie & Jonny: Friends Disunited is like overhearing a juicy conversation from the couple on the table next to you over dinner. Audience members are other punters in the pub that the pair happen to be at, so prepare to be treated accordingly…