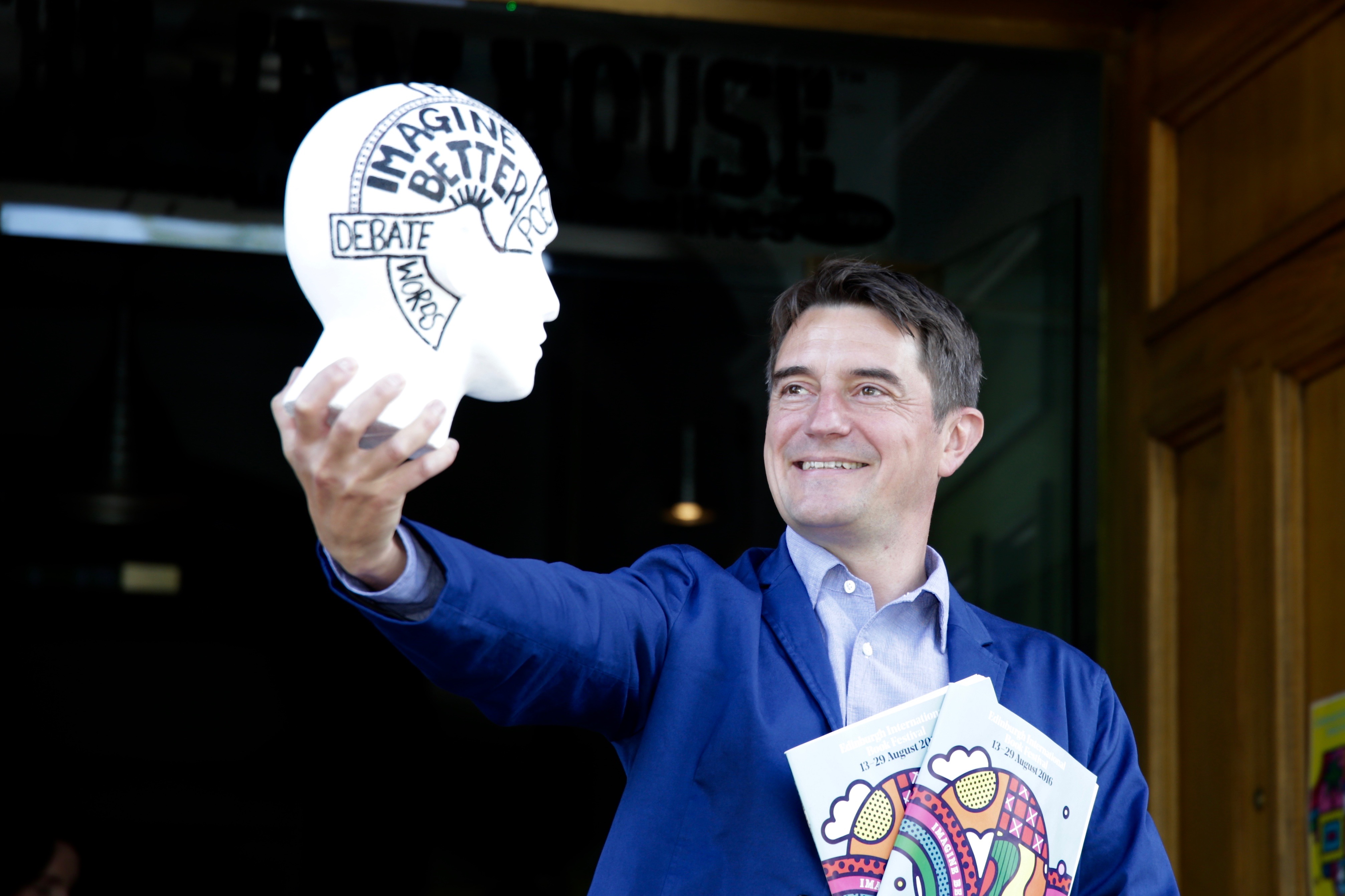 Nick Barley has been the Director of Edinburgh International Book Festival since 2009. The festival began in 1983 and hosts around 700 events a year.

Recently, Nick sat down to talk to The Edinburgh Reporter.

Who are you? Where did you come from?
I was born and raised in Yorkshire, living in and around York until I was 18 and went to University in Canterbury. Before moving to Edinburgh in 2003 I lived for many years in London, where I was a publisher and editor. Over the years I’ve published a host of books and magazines on all sorts of topics including art, architecture, graphic design, photography and urbanism. In recent years, through the Book Festival, we’ve published more fiction: short stories and a graphic novel, as well as a book of essays on the future of the Middle East. In my heart, I am a publisher.
What is the book you recommend that everyone should read?
I don’t think there’s one single book that would suit everyone. Personally, my tastes change depending on my mood. But I’m always keen to recommend books: of the emerging Scottish writers I am hugely impressed by Jenni Fagan’s Panopticon, while I adore the linguistic fun of Ali Smith’s novels. For non-fiction I’d recommend Helen MacDonald’s powerful H is for Hawk. As for fiction in translation, I am a huge fan of everything by the German novelist Jenny Erpenbeck, and for muscular American fiction it has to be the immensely-talented Rachel Kushner’s The Flamethrowers. My favourite poet at the moment is Alice Oswald, who launches her astonishing new collection at the Book Festival this August.
Favourite music? (According to genre, artist, song, album?)
I’m a musical magpie. I listen to everything that’s in the ‘Best New Music’ category on the US music website Pitchfork. If I could have been in a band I’d play guitar in the US alt-rock band Pavement.
Best tip for public speaking or delivering presentations?
Speak about your subject with passion. What was the defining moment on your career path that got you where you are?
I was invited for a meeting with Nicholas Serota, director of Tate when I was in my early 20s. He encouraged me to propose a new art magazine which would be sent to Friends of the Tate. When we launched Tate magazine in 1992, there were 9000 Friends; two years later there were something like 100,000 and it was mainly thanks to the magazine that the Tate’s membership had increased so massively. I realised that it’s worth trying things out and taking risks.
What makes Edinburgh the best place for you to live and/or work?
Recently I had a day off work and spent six hours walking in the Pentlands. Another weekend we walked on a beach in East Lothian. We can get to these awe-inspiring empty spaces in next to no time – yet I can still walk to work in a capital city. What’s not to like?
What is your special area of Edinburgh, or special place in Edinburgh and why?
We live at the top of Leith Walk and it’s still my favourite area of the city – a liminal space between swanky Broughton Street, lively-but-tatty Easter Road and the urban bustle of the city centre. If you’re eating out what kind of food is your favourite?
Three great restaurants: for brilliant culinary surprises, the Gardener’s Cottage on London Road. For a ceremonial feast, Japanese restaurant Kanpai by the Lyceum Theatre. For Sunday brunch, Richie and Moira’s fabulous low-fi place Spoon, opposite the Festival Theatre.
If you have a mentor then could you tell us who that is and about your relationship. What benefits does that relationship bring to you and your worklife?
The new Chair of the Book Festival Board is Allan Little, the BBC journalist. His job was to follow on from Lady Susan Rice, who had been an absolutely inspiring mentor to me. But Allan’s stepped into the role with great skill and tact. We’re forging a great working partnership that’s giving me the courage to consider brave new ideas for the Book Festival.
If you have used any then which networking groups in Edinburgh have you found particularly useful?
I don’t think ‘networking’ is a word. I believe in collaborations and conversations. Our Unbound events at the Book Festival involve lots of organisations and impresarios who are busy building networks. Meanwhile the recent Desire Lines project (in which I was closely involved) brought together all sorts of people from across Edinburgh’s cultural communities, and in the coming years it will help drive new cultural projects in the city.
Who are your heroes?
Keith Walwyn, whose goals turned me into a die-hard York City fan.  Flaminio Bertoni, whose Citroen DS in the early 1950s was the most revolutionary car design ever.  And Billy Bragg, who inspired me to pick up the guitar again, and who’s appearing at the Book Festival on 14th August.

What are your goals for the next year?

To keep the Book Festival as the world’s best-respected, most innovative, most international literary festival. I’ll tell you about the details on the day we launch our programme in June 2017.
Describe your typical day for us.
There’s no typical day. I do a lot of travelling, both in Britain and abroad: recently I’ve travelled with authors to places including Lahore, Jerusalem, Sydney, Guadalajara and Pisa as well as Dundee and Dumfries. I have a lot of meetings with publishers, editors, agents, authors, festival directors and cultural ambassadors. And I get to read a lot of fantastic books. I’m very fortunate.
Where will you be in a year’s time?
Talking to you about the 2017 Book Festival programme, and Edinburgh’s 70th anniversary as a festival city.
The book festival runs from 13 – 29 August. For more information, click here.