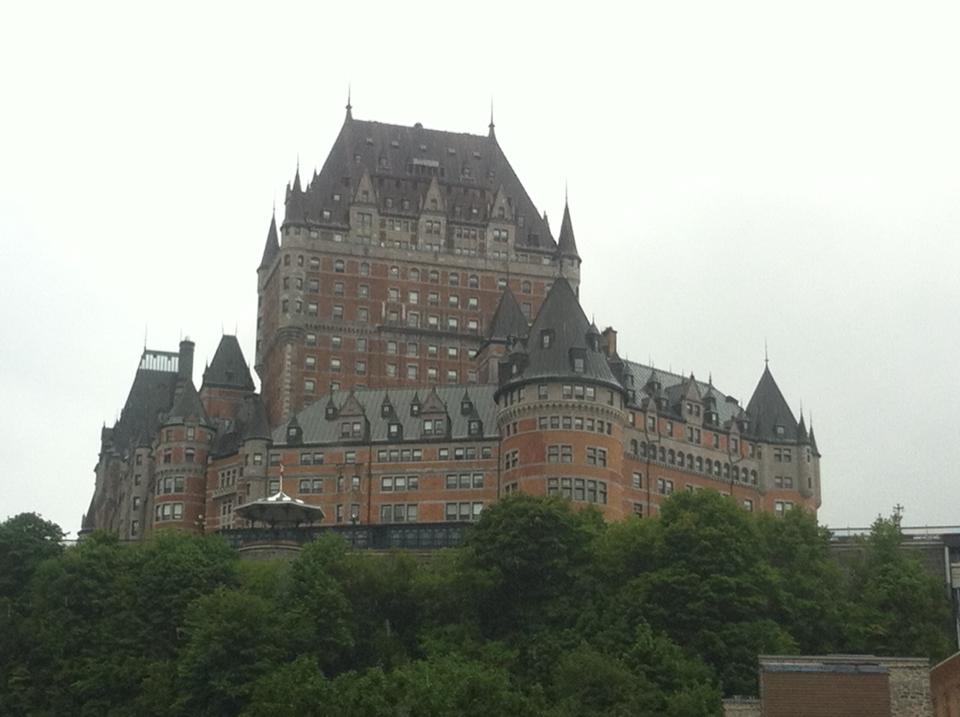 Former Lothian and Borders Police officer Andrew Dickson is cycling, unsupported across Canada to raise money for the Craig Gowans Memorial Fund, FACE (Fighting Against Cancer Edinburgh) and the Friends of the Sick Kids Foundation.

His adventure is being followed by the Edinburgh Reporter and here is his story in his own words.

“Sunday was a nice but nothing special. Roads were relatively quite & slightly undulating, the sun was out and it was warm. Continued on Hwy 101 to Matheson before taking Hwys 11 & 66 to Kirkland Lake where I camped discretely behind some chairs in the middle of town.

“Monday on the other hand was VERY SPECIAL for several reasons which I’ll list in order of occurrence.

“1st: We went over the £1000 (plus ‘gift aid’) on the Virgin Money Giving page. A massive “Thank you” from myself and the charities involved to all who have donated so generously. Hopefully there’s more to come so please keep passing on details of my cycle. I should have mentioned earlier, if there are folks who would like to donated but don’t want to do so on-line, please contact myself or anyone who knows me. Thanks again to all who have donated thus far.

“2nd: I was just leaving Kirkland Lake when I finally caught my first sight of a little, live, wild black bear as one was crossing the road. By the time I got my excitement under control, stopped the bike, opened the barbag, got out the iPhone, switched it on and opened the camera app, it was too late. Ran down a track hoping for another glimpse but the little thing was gone. So all I have is a photo of my bike against a pole, as a reminder of where it happened. Minutes later I spoke to a local who told me he sees bears every few days. Apparently it’s been a poor year for wild berries which the bears eat after hibernation, so they’ve been coming into town. It was still a “Yipee” moment for me. Then if that wasn’t good enough, 7 miles further on another little black bear crossed the road but this time running, so I didn’t even get the chance to stop. Just a photo of the road and snowmobile sign where it happened.

“4th: Few miles further east and I left Ontario and entered the Provence of Quebec. The road I was on changed from Hwy 66 (Ontario) to Hwy 117 (Quebec). I’m getting there.

“5th: Stopped early for the day at a lovely picnic area beside Lac Renault and spent an hour watching the sun setting at the opposite side of the lake.

“So for all these reasons, Monday was really special to me. “Tuesday, Wednesday & Thursday spent following Hwy 117 through Rouyn-Noranda and Val-d’Or before I entered the ‘Reserve faunique La Vérendrye’. The road through the national park is about 150 miles with dozens of lakes and rivers surrounded by forest. Several have Scottish names.

2Unfortunately I didn’t see much wildlife except for the little terrapin which I helped cross the highway. Must be a challenge when you can only walk about a foot a minute!

“Camped just outside the reserve at the Chute du Ruisseau Quinn picnic area. The river side walk and waterfall are a bit special. Just as it was getting dark, had my third bear encounter. It was just on the other side of the picnic shelter from my tent. Again I didn’t get a chance of a photo before it disappeared into the woods. This was a bit larger than the previous two. Maybe next time.

“Friday, Saturday and Sunday spent cycling into Montreal. La Route Verte 2 continues following Hwy 117 to Mont-Laurier but then becomes a multi use path following the course of a former railway line right into the city.Wish there were more vehicle/SPACE/cycle signs in UK which might make things safer, particularly for the kids.Had the pleasure of watching 100s if not 1000s of glow worms displaying just as it was getting dark on Friday evening.

“The walkway is about 150 miles long and has some wonderful scenery. The surface is good, being either sealed or chip & whin. There were 1000s of folk using it on Saturday & Sunday, mainly cyclists but also walkers, people in/on wheelchairs, skateboards and inline rollerblades. This is also part of the transCanada national trail. “Had a look at the gorge and waterfalls on the Rivière du Nord near Sainte Adèle on Sunday morning before reaching the city of Laval, which is part of greater Montreal, by mid afternoon. Was staying with Sylvie & Richard through the WarmShowers website. They very kindly drove me round some of Montreal in the evening. Lovely city.

“Monday & Tuesday spent doing tourist stuff in Montreal. Took in Mont-Royal (the city centre’s little mountain) with views of the whole city including the financial area; Chalet du mont Royal with a beautiful interior roof; L’Oratoire Saint-Joseph; Old Town; the water front and 1986 Olympic Park. The latter is now a fantastic educational complex with something of interest for everyone.

“I wish to extend a heart felt thanks to Sylvie & Richard and Rachelle & Eric for their kindness and hospitality which made my stay in the city particularly enjoyable, interesting and pleasant. Their advice on the various route options available to me over the next few weeks was also appreciated.

“Rue Dickson seemed a good way to leave Montreal. Followed cycling ‘La Route Verte 5’ all the way to Quebec. This basically uses the hard shoulder of Hwy 138 or takes minor roads nearby. As a consequence I went through numerous, lovely French style villages and had constant views of the St Lawrence River.

“Struggled to find a camping spot on Wednesday evening and had to make do with a patch of grass next to some grain storage units. Thursday was much better in a picnic area with views overlooking the St Lawrence River. Sat overlooking the river after dark and on the way back to the tent came across my first little skunk of the trip.

“I can now say Old Quebec is without doubt my favourite city. My approach was along the multi-use river path giving views of two bridges which appear familiar. I previously presumed ‘the Ferry’ was the only place with both cantilever and suspension bridges together. Quebec’s cantilever takes trains, motor vehicles and has a multi-use path.

“Old Quebec itself has beautifully restored stone/brick buildings; lovely alleyways; the citadel on the hill giving wonderful views of the St Lawrence River with its bridges and ferries; streets that go up/down and not just on the flat; staircases and boardwalks; lots of green spaces and parks; the waterfront; and quality street artists. The list goes on.

“And there’s NO litter, despite the hundreds of thousands of people.”