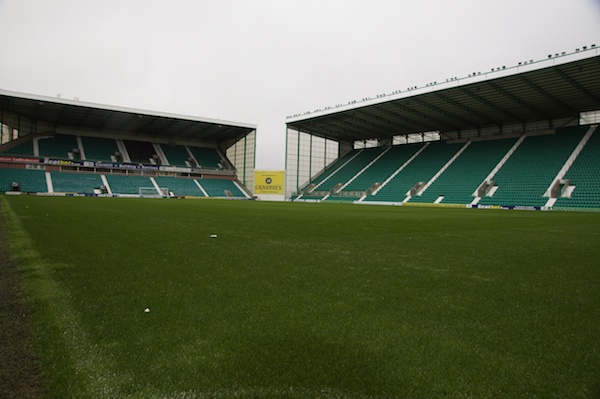 Hibs’ season ticket sales for next season reached 9,753 on Tuesday morning, thanks in part to the generous donations from supporters.

Leith Links was set up in June 2013 with the aim of giving children the opportunity to attend matches, complimenting the Kicks for Kids scheme operated by the Club.

Supporters and businesses alike have been donating to Leith Links, who puchase season tickets which are then donated to children’s charities and organisations for use.

On Saturday Susan Linn, treasurer of Leith Links, visited the Ticket Office to purchase 159 season tickets for next season, and with donations still coming in she’s expecting that number to rise further ahead of the start of the season.

She said: “I would like, if possible, to thank all of the Hibs fans who have generously donated to the fund, whether that be £5 or the £750 from the Hibernian Supporters Association as all donations count.

“A special mention should also go out to the Australia and New Zealand Hibs Supporters who sent £1,044, as they wanted to help the Club beat their 10,000 ST target and feel part of the initiative, despite their distance from Easter Road.

“One kind fan also donated a  0-7 programme for auction, which raised £511 and another a rare 1991 Hibs top, which reached £92 at auction so all-in-all, the support and encouragement has been nothing short of tremendous.

“The whole initiative is following the Club’s founding ethos-to help those less fortunate and the Hibs fans have not been found wanting.”

“Of course, a certain historic Scottish Cup win has helped too as over £7,000 has been donated since 21/5/16 and now, many more children will be able to watch the famous Edinburgh Hibees!  GGTTH.”