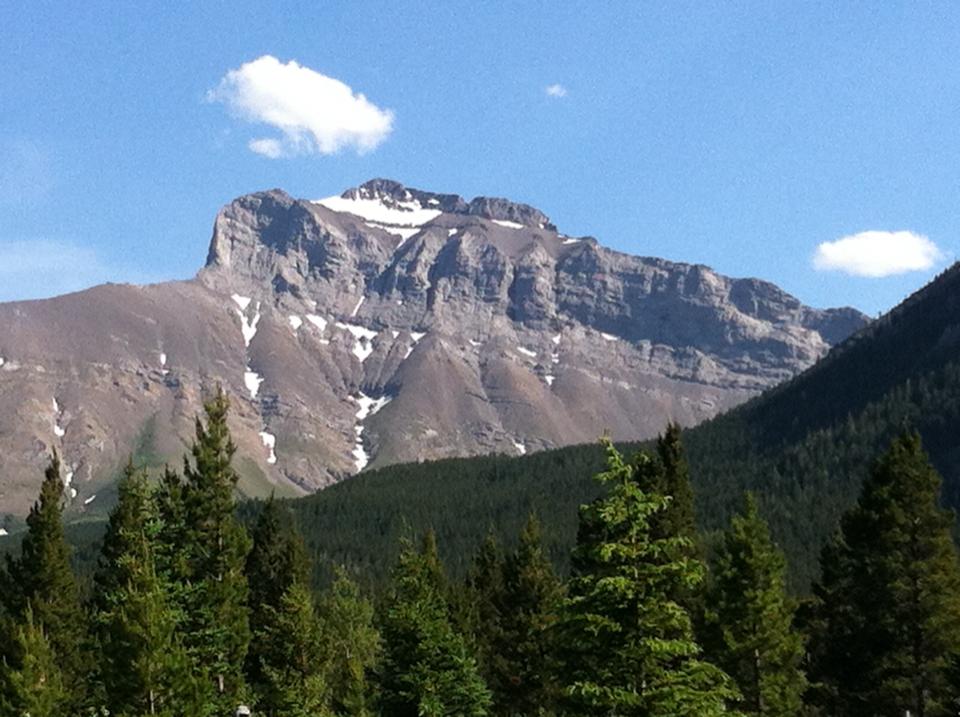 Edinburgh cyclist Andrew Dickson’s Canadian adventure is going well and he has encountered some stunning scenery as well as meeting several friendly and generous people along the way.

He has also met ospreys, squirrels and a noisy woodpecker and flown the ‘Lion Rampant’ at Fort MacLeod.

Here is Andrew’s story in his own words:

“I went through the first of several official boundaries this morning, going from 8.30 ‘Pacific’ time to 9.30 ‘Mountain’ time. Mostly gradual climb for several hours with Hwy 3, single track rail line and Moyie river & lake running together. The air temperature is in the low 30s while the water was just above freezing. Bliss, honestly. The drop down into Cranbrook is breathtaking with the mountains beyond.

“I came upon Trayson and his little sister Brynleigh out cycling with dad Nathan. Everyone kitted out with their helmets and staying safe. Dad even has his SKFF ‘T’ shirt on. How cool is that?

“Many thanks to Cathryn & Jim at Cranbrook Tourist Centre for use of the WiFi and all the useful information. To the east of Cranbrook are the Rockies Mountains for real. They are spectacular.

“I thought about camping at Rampart Rest Area with its lake but then found I was being checked out by about 10 ground squirrels. Each one took about 2 seconds to find the pannier carrying my food. They were obviously very street wise, so I was going to have to find somewhere else for the night. Didn’t want chewed panniers in the morning.

“The National Canadian Trail crosses the country from Pacific to Atlantic and is used by walkers, cyclists and equestrian folk. It runs by this rest area. Too difficult for my road touring bike.

“Moved about 400m further along to the Rampart Prairie conservation area with wonderful views of the mountains known as the Steeples. The tallest summit in the area is Mount Fisher to the north of the Steeples. Went for an evening stroll and came upon a pine wood ant hill. Fascinating. “Continued on Hwy 3 to Jaffray where I took the quiet Baynes Lake Road to Kikomun Creek Park for lunch. Was expecting a tough uphill afternoon but other than a minor climb to Elko the rest of the 20 miles to Fernie was a dream. The road and railway line run along the bottom of the Elk River canyon that seems almost flat. The river is flowing the opposite way so there must be some ascent but it’s not much. Mountains fill both sides of the canyon and a small tunnel adds to the excitement. Mountains also surround the town of Fernie and The Elk River flowing through town adds to the beauty.

“Would like to thank Peter Sterling and his colleagues at Elk Valley Realty for inviting me in to use their WiFi. It was really appreciated folks.

“Hung about town and managed to see an osprey on a nest and a small snake which didn’t hang about for a photo. I also heard a mum moose and calf have been in town recently but sadly I didn’t catch a glimpse. Found a nice spot by the Elk River for an evening meal and camped by Coal Creek. Scenically, this has been the best day of the trip so far.

“Cycled by Mount Proctor and Mount Hosmer beside Hwy 3 which again appeared almost flat. Sparwood has the Titan on display, which is billed as the ‘world’s biggest off-road truck’. The trains over here are massive. Some are towing several 100 goods wagons.

“Crossed from British Columbia into Alberta at 4.45pm on Tuesday at Crowsnest Pass (1358m). Since the town of Hope, I have been following Highway 3 & 3A which is known as the Crowsnest Highway taken from this pass. I’ll probably stay on this highway until I reach Lethbridge. The river and mountain scenery is fabulous however, if at 4 in the morning, a British Columbian woodpecker is head butting a tree nearby, don’t bother trying to get back to sleep. Total waste of time. Not only can you hear it, you can FEEL it!!!

“Looked in at the Crowsnest Pass visitor centre which is nice but I’m not sure it’s traditional cladding for a wigwam. The tiny chapel with ringing bell and all internal fittings is also cute. Possibly the smallest in Canada. Once down from the Rockies, Alberta is flat and from what I’m told windy. They have certainly embraced wind farm technology in a big way.

“By good luck came upon the Oldman River park just in time. Minutes after arriving the wind picked up and the skies darkened. Only just got the tent up before the rain, lightning and thunder hit for 3 hours, but woke to a beautiful day beside the Oldman River. “Felt I should fly the ‘Lion Rampant’ at the Fort MacLeod town sign. Alberta might have some oil beneath the surface.

“Visited the ‘Helen Schuler’ Nature Centre which is a fantastic educational facility. It currently has a very informative display on the critical importance of bees. In the surrounding nature reserve I came upon this yellow Prickly Pear cactus.

“Have cycled by a couple of more Scottish place name connections.

“Decided I might try following the designated Red Coat Trail which ends in Winnipeg. Will see what’s it like and it might get me onto quieter roads.

“Decided to forgo a night in the tent and stay somewhere a little more upmarket and comfortable. The barn seemed just right. Good choice as the resident rodents were friendly, a deer came visiting, an owl used the glassless upper window as a hunting perch overnight and a little weasel (it’s in the photo – honest) entertained me in the morning. And sunset from the door wasn’t bad either. Few miles cycling in the Friday morning brought me into the Alberta ‘Badlands’.

“In the town of Foremost I went looking for the ‘Town Office’ and by a piece of look luck, called in error at the offices of Agriculture Financial Services Corp where I met Mathilde, Judy, Michael, and Chelsea who not only made me very welcome and provided the information I required but gave me lunch consisting of wonderfully cooked Alberta beef on wholegrain rolls, cake and coffee. It was really appreciated folks. I’d also like to thank Michael for his generous donation to the charities involved in my cycle.

“On entering town earlier I had been noticed by Monica, who is also cycle touring and staying with her friends Wanda and Kim. On then seeing my bike outside the AFSC offices, the girls came in, spoke and I was invited to stay the night in town. In addition to being made very welcome, as it happened my first lot of very heavy rain started late afternoon and continued into the night. So instead of getting very wet on the road cycling and in the tent, I was nice and dry in a lovely home and tucked up in a comfy bed. A huge thank you is extended to Wanda, Kim and their daughter Zoe.

“So all in all, Friday was a very memorable day of true, unconditional Canadian hospitality and kindness.

“Left Alberta and entered Saskatchewan on Sunday morning. Only immediate difference I noticed was the road number changes from Hwy 501 to Hwy 13 but the ‘Red Coat Trail’ designation continues.

“After 60 miles on gravel, I felt I deserved a real coffee so called in at the Manley Bread and Honey cafe in Consul. It’s a great little town cafe made all the more homely by Vicki & Dave who obviously have a real sense of community. Photo includes Vicki, Mike, Dave, Paula, Betty and Paul. Dave actually knows a former work colleague of mine. Small world.

“To Sheryl & Nelson Emiry who were other customers, “Thank you for the generous donation to the charities linked to my trip. It’s really appreciated”.

“Cycled about 20 miles east of Consul to camp at semi abandoned farm buildings.”