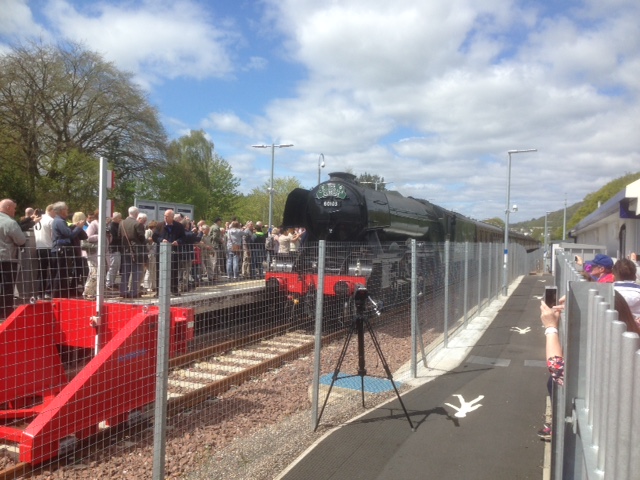 Hundreds of people turned out this afternoon to watch the Flying Scotsman pull into Tweedbank Station in the Scottish Borders.

Galashiels Community Council and other local groups hosted musicians, face painters, bouncy castles, craft stalls and railway memorabilia amongst other entertainment across the town to celebrate the occasion.

The Flying Scotsman arrived at Edinburgh Waverley Station last night, its first trip to Scotland since its restoration was competed earlier this year and left again shortly before 11am this morning carrying over four hundred passengers who paid up to £169 for ticket to ride in vintage carriages.

A crowd of around 800 people watched it leave for Tweedbank and several thousands lined the route to get a good view. It was due to return and cross the Forth Bridge this evening.

The planned journey had been cancelled at the last minute after concerns about whether the locomotive would fit past bridges and platforms however after protests, Network rail staff worked through the night to carry out the necessary safety checks.

After learning of the U turn, David Parker, Leader of Borders Council said: “We are absolutely delighted to be told the news this afternoon that the Flying Scotsman will be visiting the Scottish Borders tomorrow after all.

“Phil Verster and his team deserve enormous credit for what they have done to allow the safe passage of the Flying Scotsman to the Borders tomorrow as originally planned. The hard work and dedication of the ScotRail Alliance has managed to resolve in less than 24 hours what Network Rail have been unable to do in 12 weeks.

“I would also like to thank Derek Mackay, the Transport Minister who has clearly worked extremely hard to ensure that the very special events planned for this weekend in Scotland can take place.

“Going forward, there must be lessons learned from this and in particular how events are managed by Network Rail in the future. We will work with the ScotRail Alliance to ensure that what we have witnessed this weekend never happens again.”

Network Rail chief executive Mark Carne apologised  for the earlier cancellation and promised a full investigation saying: “Engineers and analysts have worked hard to find a way to get the necessary safety checks and engineering assessments done.

“I am pleased to say that we have been successful and are now able to reinstate the original planned tours of Flying Scotsman in Scotland on Sunday. I wholeheartedly and sincerely apologise for the consternation caused by the premature announcement yesterday.

“Once the tours have been safely and successfully run, I will be instigating a full investigation into how this problem occurred on our railway in Scotland.”

The locomotive was built  in Doncaster, South Yorkshire, in 1923, and  pulled the first train to break the 100mph barrier in 1934.

Work got under way on its decade-long restoration in 2006.