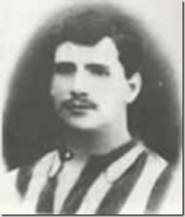 Yesterday we featured the 1979 Scottish Cup Final which Hibs’ lost after two replays to Rangers. Today we look back to the first time the cup arrived in the capital; the 12th February 1887.

By the start of that decade, Hibs had established themselves as the top team in the east, and had built up a considerable support from Irish communities throughout the country.

Hibs started the 1886/7 Scottish Cup campaign in confident mood, having reached the semi-final stage for the previous three years. A 5-1 win over Durhamtown Rangers in the first round was followed by a 3-0 victory over Mossend Swifts in a replay after a 1-1 draw, which set up a third round tie against city rivals Heart of Midlothian.

No fewer than 7,000 fans crowded into Easter Road for the game, and a mistake by Hearts goalkeeper Gibson gave Hibs a flying start after he dropped a cross at the feet of centre forward Phil Clark. McLaren struck a second then McGinn added a third before Hearts pulled one back.

Two further goals from Billy Fagan saw the game finish 5-1 to Hibs, who were then given a bye into the fifth round where they disposed of Queen of the South 7-3.

The quarter final was played on Christmas Day at Cathkin Park in Glasgow, where despite dreadful weather conditions, the game went ahead and Hibs won 2-1.

Hibs went into the semi-final draw along with Dumbarton, Vale of Leven and Queens Park as rank outsiders, but at least they emerged with a home draw. The game against Vale of Leven was postponed for a week due to the state of the Easter Road pitch, and the Hibs board doubled the stand process to two shillings for the match, raising a record sum of £170.

Vale of Leven didn’t take their defeat lying down however and lodged a formal complaint with the SFA claiming that one Hibs player had received an illegal payment.

The SFA met two days before the final to consider the case, but decided that as there was insufficient evidence, they would reconvene after the game.

On the morning of the game, it emerged that Willie Groves was the man in the middle of the protest row as someone in his factory had reported that he was receiving £1.00 from Hibs every week, which in fact was true, but was compensation for loss of work.

The Hibs player travelled to Glasgow by train, arriving at Queen Street Station at 2.12pm where they were met by local catholic leaders and they made their way to Hampden Park for the 3.30pm kick off.  Official records show that just over 8000 fans paid an entrance fee although estimates at the time suggest over double that number were present.

Hibs travelling support was estimated to be around one thousand and were distinguished by small green cards in their hats which read ‘Hurry Up Hibs.’ Every conceivable means of transport had been utilised by the Hibs fans. A first class return on the train cost 9s.6d (forty seven and a half pence), second class 7s (thirty five pence) and a third class 4s (twenty pence).

Legend has it that one fan, a burly character called Dan Fyfe who drank in the Halfway House walked to and from Hampden arriving back on the following Wednesday looking ‘extremely tired but satisfied.’

Dumbartonshire was one of the hotbeds of Scottish football with three strong sides including Vale of Leven and Renton, and the ‘Sons’ had already won the Cup and appeared in two other finals.

The pitch was slippery after a recent thaw and Hibs started brightly applying early pressure forcing Dumbarton defender Millar to head clear from under his crossbar. Dumbarton, clad in blue and white strips then had the best of the game for a while, and actually claimed a goal, but the ruling was that the ball had gone outside the post. (There were no nets in those days.) Fagan then headed the ball off the Hibs goal-lone, whilst Hutcheson did the same for Dumbarton as play raged from end to end in a ‘welter of excitement.’

Toward the interval, Hibs gained the upper hand with several useful attempts at goal, but had to settle for being level when the half time whistle blew.

The second half started in much the same way, with McGhee making a fine clearance for Hibs then Smith and Clark missed chances at the other end. Tobin saved well from Robertson, but when the ball was sent back into the goalmouth, Aitken but Dumbarton ahead with a blistering drive.

Hibs retaliated and Macaulay was charged through his goal just a fraction of a second after parting with the ball. Play died down a little as Dumbarton settled on their lead, but their keeper made a mess of a Clark shot from near the corner of the pitch and Hibs had their equaliser.

In the last minute, Groves set off on yet another prancing, weaving runs before passing the ball to Lafferty who sent it past Macaulay into the goal while the Dumbarton defenders claimed offside.

The goal was given, but a the wry smile on the face of Hibs captain McGhee suggested that Hibs may have had the rub of the green for once.

After the game, the victorious party were entertained to speeches, songs and an excellent supper in St Mary’s School in East Rose Street in the east end of Glasgow before returning to the capital by train.

Back in Edinburgh, those who had stayed at home milled around Register House seeking information, and when news of the triumph filtered through, paperboys were knocked over in the rush to read of the team’s success.

Two thousand well-wishers greeted the players at 10pm when the train arrived at Waverley Station, along with two bands, plus a brake and horses bearing a large banner which read ‘Hurrah for the Green Jerseys’ which lead the celebrations to the Tron Kirk then finally to St Mary’s Street.

As the rejoicing went on, no-one gave a thought to the complaint by Vale of Leven, but the following Tuesday, a meeting was held where the ‘informer’ could provide no proof of his claim. Despite the lack of evidence however, it took a casting vote of the Chairman Mr R. Brown to pass the ‘not proven’ verdict.

No-one in the Hibs team that day captured the affection of the supporters as much as ‘Darling’ Willie Groves. In his book, ‘Hibernian; The Complete Story.’ author John R Mackay describes Groves as follows: “No more fascinating player ever appeared in a football arena. Tall, sinewy and graceful on the ball his work was beautifully close, artful and deceptive. He was a picturesque figure, a sort of Romeo in the sport with his raven locks and classic cut features. His speed and swerve made him often seem unstoppable and it was one of his thrilling solo runs which set up Hibs’ winner in the 1887 Scottish Cup Final.”

Tomorrow we look back to a heavy defeat which turned out to be the start of a glorious period in the club’s history.